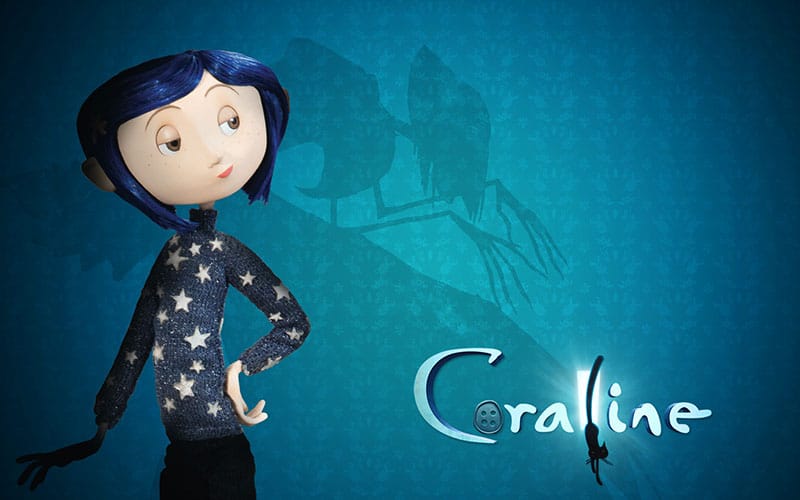 A horror film for children? That’s what Henry Selick’s Coraline is in essence. Actually, it’s far more than that. Based on a superb Neil Gaiman novel, Coraline is an animated masterpiece; a dark fairy tale with a cautionary message about appreciating your parents.

When I first saw this in the cinema, afterwards I overheard horrified parents making comments to the effect of “That should never have been PG” mingled the responses of gleeful children muttering “That was brilliant”. The fact that I was firmly in the latter category means I am either very much in touch with my inner child, or else I understood what so many adults do not: fairy tales, especially those with a strong moral underpinning like Coraline, are meant to be scary and are all the more effective for it.

The plot concerns young Coraline Jones, who moves to a new house with her parents, both of whom write about gardening, but seem oddly reluctant to actually go and do any actual gardening. Coraline resents having been made to move, her parent’s frequent inattentiveness, their bad cooking and other irritating habits. However, after exploring her new home she discovers a doorway to a strange parallel world containing an exact replica of her house, along with her “other mother” and “other father”. These alternative parents are a lot more fun, with her other mother being an amazing cook and her other father being a musician. However, there is one alarming difference: they have buttons for eyes. What’s more, they want her to stay with them, if only she will agree to have buttons sewn into her eyes too.

Make no mistake, this is one scary story; with buttons for eyes and other surreal, nightmarish imagery woven into Selick’s visually stunning stop-motion animation. The vocal performances – from the likes of Dakota Fanning, Teri Hatcher, Ian McShane, Jennifer Saunders and Dawn French – are all terrific, and the plot builds with escalating dread to a terrifying climax.

However, despite the scares, Coraline’s underlying message, about valuing one’s parents even if they are, well, a bit rubbish, is an important one. The film also addresses the issue of the grass not necessarily being greener on the other side of the fence – again, in a way that will make perfect sense to younger viewers. It might not be for the very young or more sensitive children, but Coraline is perfect for kids who love suspense and surreal, macabre thrills of a properly scary fairy tale.