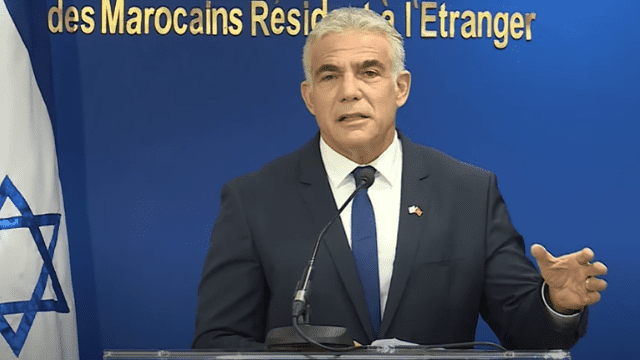 Israel Foreign Minister Yair Lapid continued his whirlwind pace visiting other nations. He has been to the UAE and to Rome, Italy, to meet with foreign dignitaries. And this week, he traveled to Morocco Wednesday. His historic visit is the first by an Israeli foreign minister since 2003 and since ties between the two nations were re-established eight months ago in the Abraham Accords.

“I am going to Morocco to represent Israel and dedicate the Israeli mission in Rabat, the capital,” Lapid said Tuesday before his departure. “The historic trip is a continuation of a years-long friendship and deep connection to the roots and traditions of the Jewish community in Morocco and the large community of Israelis with origins in Morocco.”

There has been a Jewish presence in Morocco for 2,000 years—at one time, a quarter of a million Jews lived there. About one million Israelis have family ties to Morocco—including my wife, Elana. Her parents were Moroccan Jews who immigrated to Israel not long after the nation was reborn in the early ’60s. Most of the Moroccan Jewish community came out of Spain in the 1400s during the Inquisition. Jews were forced to either convert to Catholicism or flee the country.

At the end of July, Israel launched its first direct flights to Morocco. It is anticipated that tens of thousands of Israelis will visit the North African country every year. All of the Cantor girls are planning a trip to visit their grandmother’s homeland together. Several thousand Jews still call Casablanca home, making it the largest Jewish community in the region.

“This ancient peace and friendship is being restored by people who rethink and redefine historic disputes,” Lapid said after his arrival. He also thanked Morocco’s King Mohammed VI for his “vision and courage.”

While the Abraham Accords opened the door, the government of Morocco has yet to fully normalize relations with Israel. The two have reopened liaison offices in each other’s countries. Before the Abraham Accords, Israel and Morocco had established a low-level connection in the 1993 Oslo Accords. But the 2000 Second Intifada strained those ties. However, the recent mutual threat from Iran has strengthened the bond again.

Bourita also called on Israel to restart negotiations with the Palestinians for a two-state solution, saying King Mohammed VI wanted it to be “based on the borders of 1967” and that “negotiations are the only way to reach a final and comprehensive solution for two states living side by side in total peace.”

Lapid said, “The agreements will bring our countries innovation and opportunities for the benefit of our children—and their children—for years to come. Nations and people are measured by their ability to really see the other. To see the other’s suffering, their hope, their need for change. This moment would not have arrived if we had not decided to see one another.”