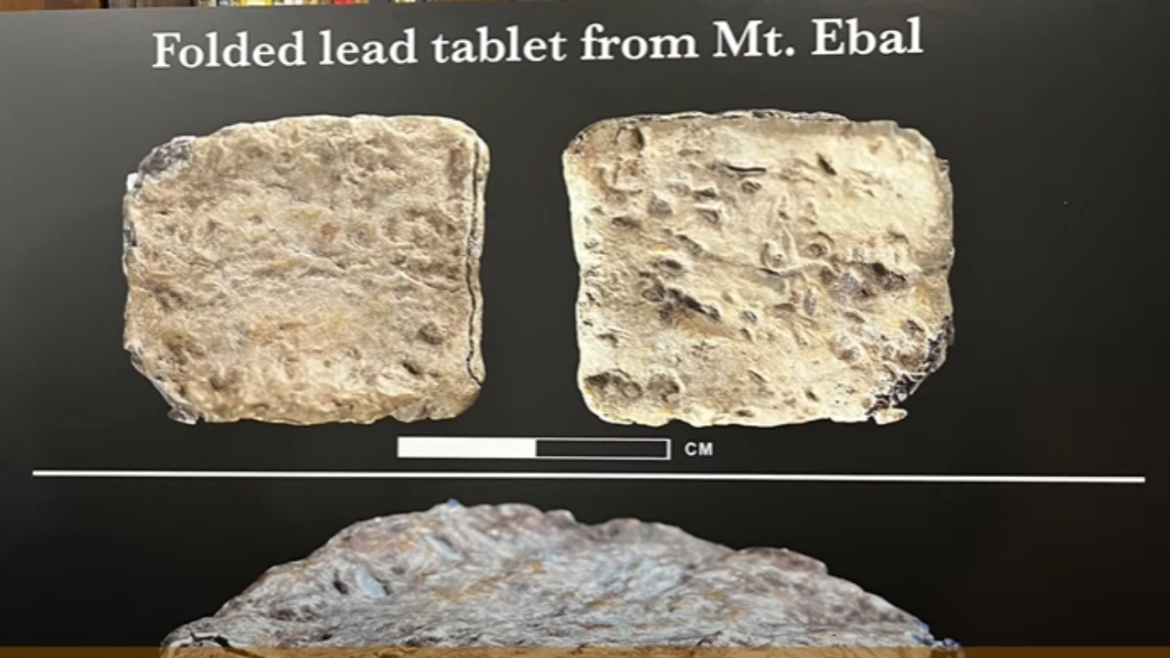 A team of international archaeologists announced on Tuesday the discovery of “a text you find only every 1,000 years”—a tiny tablet that, if fully verified, would change history books.

At a press conference in Houston, Texas, archaeologist Dr. Scott Stripling and his team of scholars released the details of their extraordinary find—a 2 cm by 2 cm (about ¾ of an inch square) folded-lead tablet that is written in early Hebrew script (proto-alphabetic Hebrew, kind of like Egyptian hieroglyphics, with picture-type lettering).

Dr. Stripling said “he was stunned” by the find. “As soon as I saw it [the tablet], I knew what it was because these curse tablets are known. My heart almost jumped out of my chest.”

The “curse tablet” was unearthed three years ago during a re-examination of a pile of dirt from the 1980s excavations at Mount Ebal conducted under Prof. Adam Zertal. In the 1980s, Zertal excavated an ancient altar on Ebal and found pottery dating back to the time of Joshua—the 13th century BC—the Late Bronze Age.

In Deuteronomy 11:29, Moses instructed the people that when they enter the Promised Land, half of them were to stand on one mountain, Mt. Gerizim, and the other half on Mt. Ebal while the Levites read out the terms of keeping or breaking their covenant with God. This was very similar to the customary way two parties in that time period would make a social contract. The terms were clear, and everyone understood what was at stake and what was promised.

In Joshua 8, this reading finally takes place (after the battle of Jericho and the fiasco and then subsequent victory at Ai). Joshua built an altar and had the blessings and curses read out loud to the people, as well as the entire Law of Moses. It is perhaps at this very altar site where this tiny tablet was found.

“This is a text you find only every 1,000 years,” Haifa University Prof. Gershon Galil said about the find. He was one of the experts that worked on deciphering the text on the inside of the tablet. The hidden internal writings on the fragile metal tablet were “read” through high-tech scanning—similar to a CT scan—in Prague at the Academy of Sciences of the Czech Republic. From this photographic imaging, a three-dimensional model was constructed of the inside of the tablet.

“We know that from the moment they came to Israel, the Israelites knew how to write, including the name of God, clearly. It’s not too surprising; people already knew how to write in other places,” Galil said. “The person who wrote this text had the ability to write every text in the Bible.”

Stripling and the other researchers have yet to publish their findings in a peer-reviewed journal, so there is a bit of academic speculation still about the validity of the dating of the find, although there is no doubt about the time period of the Ebal altar site itself.

So, what does the “curse tablet” actually say?

“We recovered 40 letters, 40 on the inside and outside of the tablet. And they were all in this proto-alphabetic script which dates to the Late Bronze Age,” said Stripling.