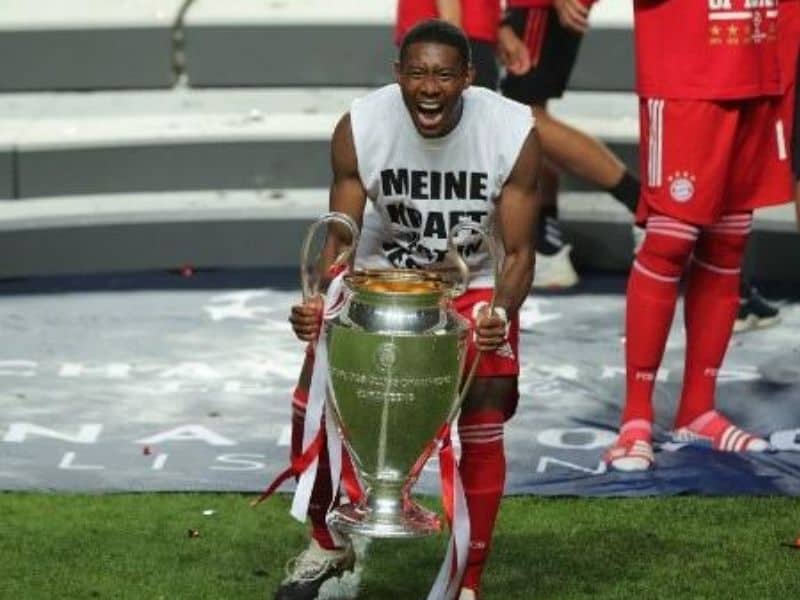 David Alaba Credits God For The Victory At UEFA Champions League: “My Strength Is In Jesus”

David Alaba, the defender of Bayern Munich, celebrated the team’s victory in a Champions League title by showing off his t-shirt printed, “My Strength is in Jesus.”

The German football team won against the French Paris Saint-Germain team in the final championship game held at Lisbon on August 23.

The winning team players shouted and cheered in front of the television viewers as the stadium did not have any audience because of the COVID-19 restrictions. David took off his team uniform and showed off a white t-shirt with bold letters, “Meine Kraft Liegt in Jesus” or “My strength is in Jesus.” And on his back wrote, “Black Lives Still Matter” in support of racial equality.

Everything is possible by the power of the Holy Ghost!
Champions of Europe! Now we’re finished.

He was seen later consoling a fellow Christian athlete from the opposing team. PSG star striker Neymar shed tears after failing to lead the French team into victory.

Neymar is in tears at the full-time whistle.

Brilliant from David Alaba taking the time to console him ????#UCLFinal pic.twitter.com/WkaCYcoyP3

The 27-year-old took to Twitter to share his joy. He posted a photo of him wearing the shirt, pointing two fingers above with the trophy beside him. He wrote, “Everything is possible by the power of the Holy Ghost! Champions of Europe! Now we’re finished.”

David was raised by his Nigerian father and his Filipino mother in Austria. He has always been open in expressing his faith to the public. During the Euro 2016 championship, he shared on Twitter a verse found in Philippians 2:4. “Let each of you look not only to his own interests but also to the interests of others.”

He has played for Bayern Munich since 2010, winning nine Bundesliga titles and the UEFA Champions League in 2013 and 2020. Moreover, the Football Club voted David as the Austrian Footballer of the Year six consecutive times, from 2011 to 2016.

Meanwhile, David’s sister, a recording artist in Austria, shared her congratulatory message on social media. “Winning looks good on you Brotherlove!! Im so proud! Love you,” said Rose May.