BREAKING
Catch a Ride on a Shared Scooter—“Micro-mobility” Coming to Tel Aviv Next...
Israel Military to Conduct First-ever Simulated Strike on Iran
‘Injury to the Heart of Iran’: Details on the Life and Death...
STAND WITH UKRAINE
Home Tags Posts tagged with "Disney Headquarters"
Tag: 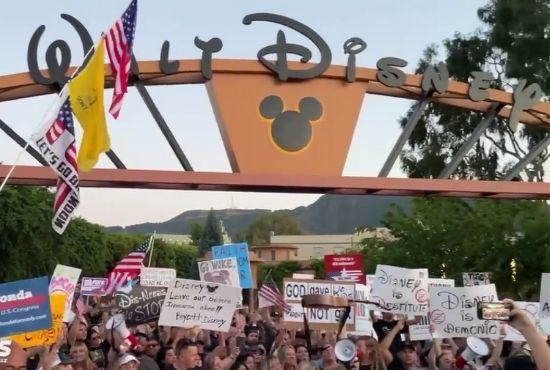 Christians and conservatives protested outside the Disney headquarters in California to stand against the company’s move to include more LGBT+ content in their films and shows.

Parents, conservatives, and Christians gathered in front of the Walt Disney Company headquarters in Burbank, California. The protest was led by former worship leader Sean Feucht. According to previous reports, Disney has decided to go against the Florida Parental Rights in Education law. The law bans classroom education on sexual orientation and gender identity in kinder to third-grade classes.

“Parents across America were blindsided by the fact that Disney would enable people that are fighting for the sexualization of children, starting in kindergarten,” Feucht said in an interview with Faithwire. “We’re talking about 4-year-olds. It’s one thing to make content. It’s another thing to fight for those that want to groom and sexualize kids.”

It was also reported that a leaked Disney executive’s meeting discussed that the company will be adding more LGBT+ content to their shows and films. Sean is encouraging Christians to stand up against these evil schemes.

Some of the people in the rally are Disney employees who have first-handed experience of how the company has gotten rid of righteousness and conservative values.

She then continued to encourage her fellow conservative Disney employees to stand up and be bold.

“Any Disney cast members that are afraid to be bold, that is afraid to be courageous, stand up. It’s okay. You’re not alone,” she concluded.