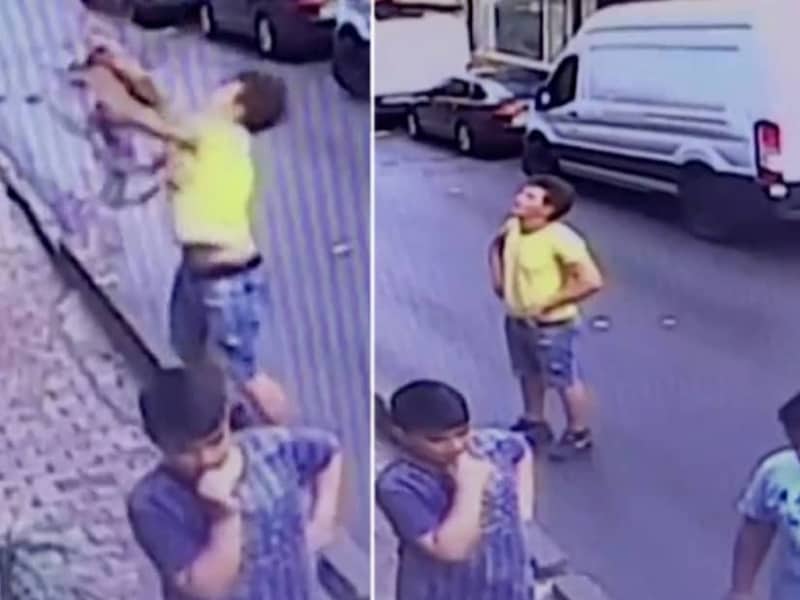 CAUGHT ON CAMERA: Teen Saves 2-Year-Old Girl As She Falls From A 2nd Story Window

A 17-year-old boy saved the life of a 2-year-old girl by catching her as she fell from a second story window in Istambul, Turkey. The terrifying moment was captured by a security camera.

Feuzi Zabaat was working in the area when he spotted a baby girl hanging around the window of the apartment building above. Concerned and keeping his eyes on the baby, Feuzi walked closer to the building.

As it turns out, 2-year-old Dora Muhammed had wandered away from her mother while she was cooking in the kitchen and began playing dangerously close to the window.

Just as Feuzi feared, the toddler went tumbling down through the open window! Thankfully, he was already paying attention and was prepared to catch her as she was falling. The teenager caught Dora right before she hit the ground.

A crowd immediately started gathering to check out the situation and find out if the girl was safe. After checking her out to see if she was fine, Feuzi brought her back inside their apartment to inform her parents of what just happened.

2-Year-Old Girl Caught by Teen After Falling Out Window

“I was just walking in the road when I saw the little girl at the window. She fell, and thanks to God, I caught her before she hit the ground,” Feuzi said in an interview.

To express their deep gratitude to the teen, Dora’s parents rewarded him with $35 worth of American dollars. However he was just happy to help.

Dora went completely unscathed and unharmed. In fact, the very next day she and Feuzi went to the park with her family and he pushed her on a swing.

Feuzi is a hero for saving the 2-year-old girl! What was just an ordinary day became the day where he was able to intercept the horrible and accidental death of a two-year-old child.

This story of heroism reminds us that God can use us whenever and wherever we may be. We just have to be sensitive to His command and have a heart that is ready to obey at any time.