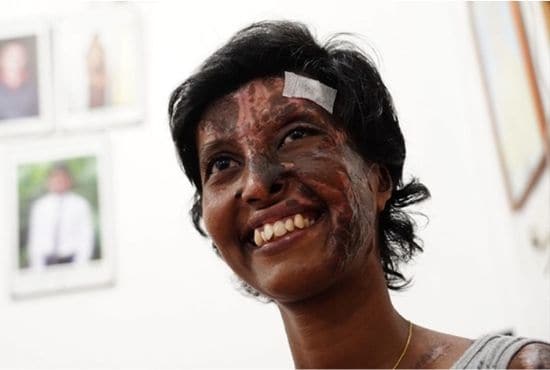 The woman who survived the Sri Lanka bombings during Easter in 2019 has become an Easter bride this year!

On Easter of 2019, Rebekah was at the Zion Church in Batticaloa, Sri Lanka with her family for a Sunday worship service. They never knew that that day will change their lives forever. While every Christians are celebrating the Lord’s resurrection, bombs are blasted at different churches and hotels.

The first six explosions were done by Islamist suicide bombers. Three churches and three luxury hotels were attacked. The bombings killed around 270 people and wounded over 500 individuals. Rebekah was among those who survived the ordeal, however, she was left with intense burns and injuries. 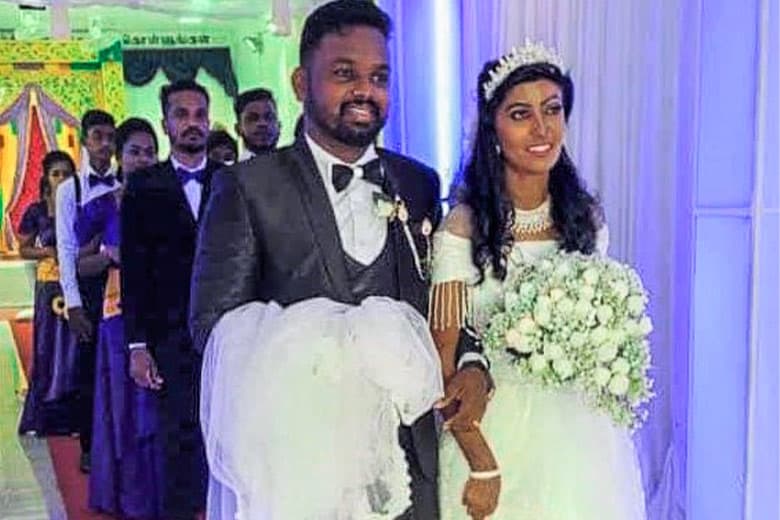 She lost her older sister, brother-in-law, and nephew during those attacks. Rebekah spent weeks in the intensive care unit and had undergone multiple surgeries to save her life. Despite her injuries and being unable to move her left-hand fingers, she still managed to take care of her orphaned niece and nephew. One of them even lost her eyesight during the bombings.

Throughout the months and years after the incident, Rebekah managed to get back up on her feet again. She was able to heal from the pain and trauma of the incident through her faith in God.

“I know God does everything for our good. I have so much peace in my heart,” she said in an interview with Open Doors in 2021.

This year, just days before Easter, Rebekah married a pastor’s son. The ceremony took place in Jaffna celebrated with their families and friends. She met Kaushik last year on social media after she released a music video for her song. The young guy sent her a friend request after watching the video and that started a life-long love between the two.

“My husband is very supportive emotionally,” Rebekah said. “Even with all the pain we’ve been through, he and his family have accepted us with all of that. He is very kind to my niece and nephew, Debbie and Rufus, as well, and they love him too.”

Read also: POLICE OFFICER RISKS LIFE TO SAVE COUPLE TRAPPED IN A BURNING CAR SECONDS BEFORE IT EXPLODED 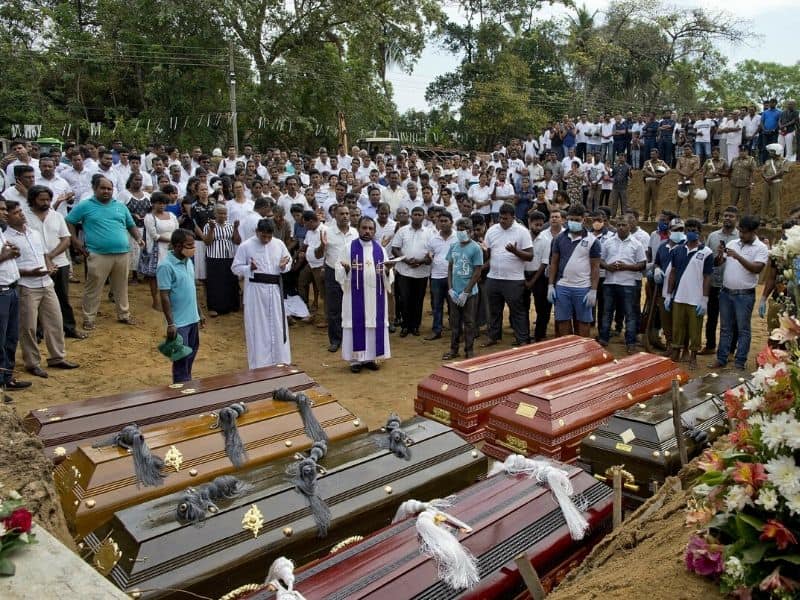 Cardinal Malcolm Ranjith is the Archbishop of Colombo, Sri Lanka. In his live stream Easter Sunday Mass on April 12, he said that the Church has “offered love to the enemies who tried to destroy us.”

“Last year, some misguided youths attacked us and we as humans could have given a human and selfish response. But we meditated on Christ’s teachings and loved them, forgave them and had pity on them,” the archbishop said in his homily.

“Not only did Catholics die but the bombs also killed Buddhists, Hindus and Muslims.” He added, “We did not hate them and return them the violence. Resurrection is the complete rejection of selfishness.”

One of the bombed church, St. Sebastian’s Church in Negombo was badly damaged. The physical environment is reconstructed but the people are still working to come through the trauma and heal together. The parish priest, Father Manjula, has reinforced every effort of building trust again. He reminds the congregation of their God who forgives and tells them to forgive. 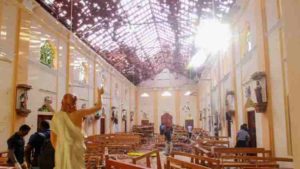 With the lockdown in place on the country, Christians celebrated Easter by joining services on live streams. There are still inter-religious strains and concerns over the government of Sri Lanka.

Jehan Perera is the Executive Director of National Peace Council. Perera claims that this is the time for unity and not for furthering division. He said, “Covid is infecting anyone without any discrimination. We must not think on these divisive lines but face the problem together.”

“Unless we are all secure, none of us will be secure, and that is the message that Covid is bringing us one year after the Easter bombings.” 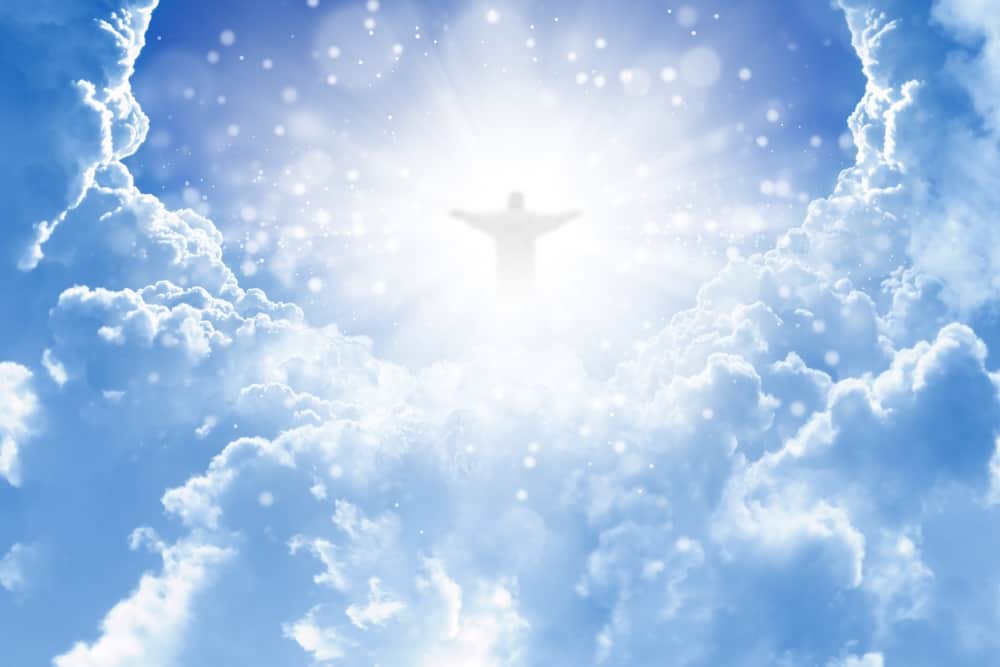 From The Last Supper, To The Garden. From The Cross To A Heavenly Throne

From The Cross To A Heavenly Throne

With these words, a prayer, and a blessing, Jesus left dinner with His disciples to finish His journey to the Cross where He overlooked the plains of time with His words echoing inside them: “In that day you will know that I am in My Father, and He is in Me, and I in you.”

What mysteries were involved in those words! How could they have known until it was all made plain?

Leaving His table for the garden, He cried out to His Father with an untold agony for the strength to accomplish what followed. By an act of will He surrendered and in the next hours was seen bearing blows that were meant to be ours.

Forgiving our sins, for we know not what we do. Making a declaration of love, as we were engraved upon His palms as he hung on the Cross: “My arms and heart are always open to you!” Taking an irrevocable stand, as His feet were pierced: “I am with you always; I will never leave you or forsake you!”

Victory at the Cross

Absorbing death’s unfounded accusations against humanity’s original identity: Himself. proclaiming on humanity’s behalf, as life swallowed up death forever, there at the end of all things: “Death is finished! You have redeemed my life, O faithful God!”

Abolishing sin as He died, pulling it straight out of us and declaring, “You are my righteousness.”

Healing the fractured hearts of our earth’s nations. Pouring out into this world’s earthen vessels His very own heart. With plans to bring the liberty of His children to the cosmos.

From those heights where He was crucified, a rich note resonates across the plains underneath from depths of untold eons of love. A three-fold wave of rich red love, from His side and hands and feet, the blood of His brow, bruises, and bleeding body rushed down to sweep death’s ugly armies away, forever banished by Life!

Yet on the immediate horizon we see men and women seemingly still tattooed by death, rushing as if from the maw of hell itself to bring an end to the life and liberty of what God intends to be a glad world. What is the issue? Be it unto you according to your faith. Have we placed our faith in death as the Savior instead of the one who said, “If you believe in Me, you will never die, and if you die you will yet live? Do you believe this?”

This “army tattooed by death” is really sons and daughters who have forgotten who they are – The Image of the Divine – and have been deceived or never told of the love of our Father, the Word who is our Brother, and the Spirit of Love who is with us always.

These have yet to remember their Father and encounter the Heavenly Man. Who upon knowing this great and happy God –who so loves the world that He gave himself for it – would not be changed, and swept up by love into a happy ecstasy?

Divine Love is a Heavenly force that changes hearts. Strong and gentle. Fierce and quiet. Bruised Reed, he will not break you! Faintly Burning Wick, He will not quench you!

And to one who chooses the good portion and only necessary thing –to be with Him – He will not ever take this away. It is what he made you for.

Mary, He will never take Himself, His presence, or friendship away from you!

Love’s Power sweeps away sorrow, taking it on Himself, that we might be a people of joy, breaking like dawn upon the darkness, banishing it from within as He shines in our hearts with His marvelous light!

Here at the Cross, the apex of all time and its union with all things eternal, He brought to His people and all that has ever been created life, liberty, and happiness – our redemption and restoration to a realized union with Him. Valiantly, His victory cry spoken for all sounds throughout the ages:

“It is finished; you have redeemed my life, O faithful God!”

Who among mankind knew at Golgotha what Love had done?

In Christ, our Father reconciled a world – alienated from Him only in their own minds – to Himself. We have a revelation in Jesus: we have been projecting our own thoughts onto God all along, creating a being in our own image instead of surrendering to the Love that has always been there for us, and in whose image we have always been!

Three days after the tomb was shut, His body buried, the Secret was let out: The Lord has been with us all along; we have always been one with Him!

We are permanently and vitally united with Jesus, one Spirit with the Lord, and part of His Eternal Processional: proceeding from the Father, in the Son, with the Holy Spirit proceeding from us in our love, revealing the Son, embraced by our Father, encompassed in the love of Triune Divinity, forever. The old has gone. The new is come.

All are in Christ. He died on the Cross for all, and therefore all have died and all have become a new creation. All are in Love. The righteousness of God, resplendent light, shines forth from your heart, in the face of Jesus Christ – your face. You are blessed, beloved one. Dance in this Papa’s Love.