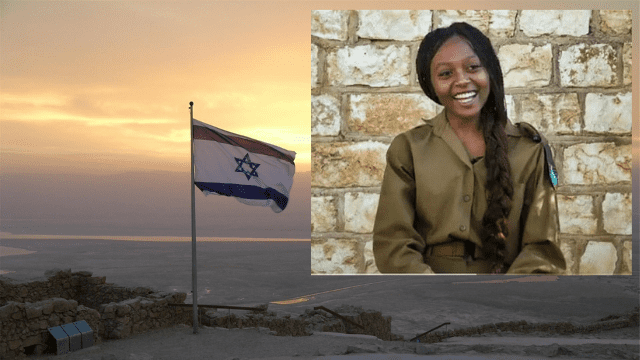 written by Ron Cantor
Eden Alene, the first Israeli of Ethiopian ancestry to compete as a Eurovision contestant, gave a stellar performance Tuesday night and advanced to the finals amidst speculation that anti-war, anti-Semitic sentiments among voters would hinder her chances.
The 21-year-old Alene was the 12th to perform in the semi-final round. She sang “Set Me Free” and nailed her signature “whistle note,” the highest note ever achieved in a Eurovision song contest. Most folks in the US are not familiar with Eurovision. It began in 1956, long before American Idol and The Voice. Contestants represent their countries. Some 39 countries participated this year.
Before stepping out onto the stage, Alene posted on Instagram that “I’m super excited, I’m dying to perform and to do my best for Israel.”
She also posted in Hebrew:
“I stood on the stage in Rotterdam and did everything I could to bring honor to my country, and its citizens, to my family and my friends. At every moment on stage, I could not help but think of those close to me and the people I represent. I am here in the Netherlands, but at heart with you at every moment, hurting, loving, strengthening, and following with concern what is happening in Israel.”
The 2020 Eurovision was canceled due to coronavirus. The 2021 competition, the 65th Eurovision contest, is being held in Rotterdam, The Netherlands. While an estimated 200 million people will watch it from home, only 3,000 were allowed to be in the arena audience. Everyone in attendance, including the performers, had to test negative for COVID-19 before the event.
Before Tuesday’s semi-finals, there were calls on Twitter for Israel to be excluded from competing due to the ongoing battle with Hamas. Protestors outside and inside the venue held up signs supporting Hamas and Palestinians, accusing Israel of being an apartheid state. Ironically, one of the signs on display accusing Israel of being racist used a picture of Alene, an Ethiopian [black] Jew.
To get to Eurovision, you must win an American Idol-styled singing competition in your own country. Israelis from all walks of life chose Alene, shattering the idea that Israel is a racist nation.
Contestants win or lose in Eurovision based on viewers’ votes by text. Alene clearly overcame the “haters” and charmed voters. She will compete in the grand finale to be held Saturday night.
To be clear, I am not a big fan of the competition. It promotes many unbiblical themes, and quite frankly, is incredibly cheesy. On the other hand, they refused to allow politics to get in the way. When reporters tried to ask Eden Alene questions about Israel’s policy regarding Hamas, organizers jumped in to protect her.
We stayed up late the other night to cheer on our Israeli Ethiopian sister. While they were tabulating the votes, rockets poured into our southern cities, as if Hamas timed it perfectly with Eurovision. The TV lit up with the names of dozens of cities that were under attack. The names kept changing so fast that it seemed that Hamas had fired over 200 rockets. Israel cut away from the competition to cover the attacks. Amazingly no one was hurt.
May 21, 2021 0 comment
0 FacebookTwitterPinterestTelegramEmail