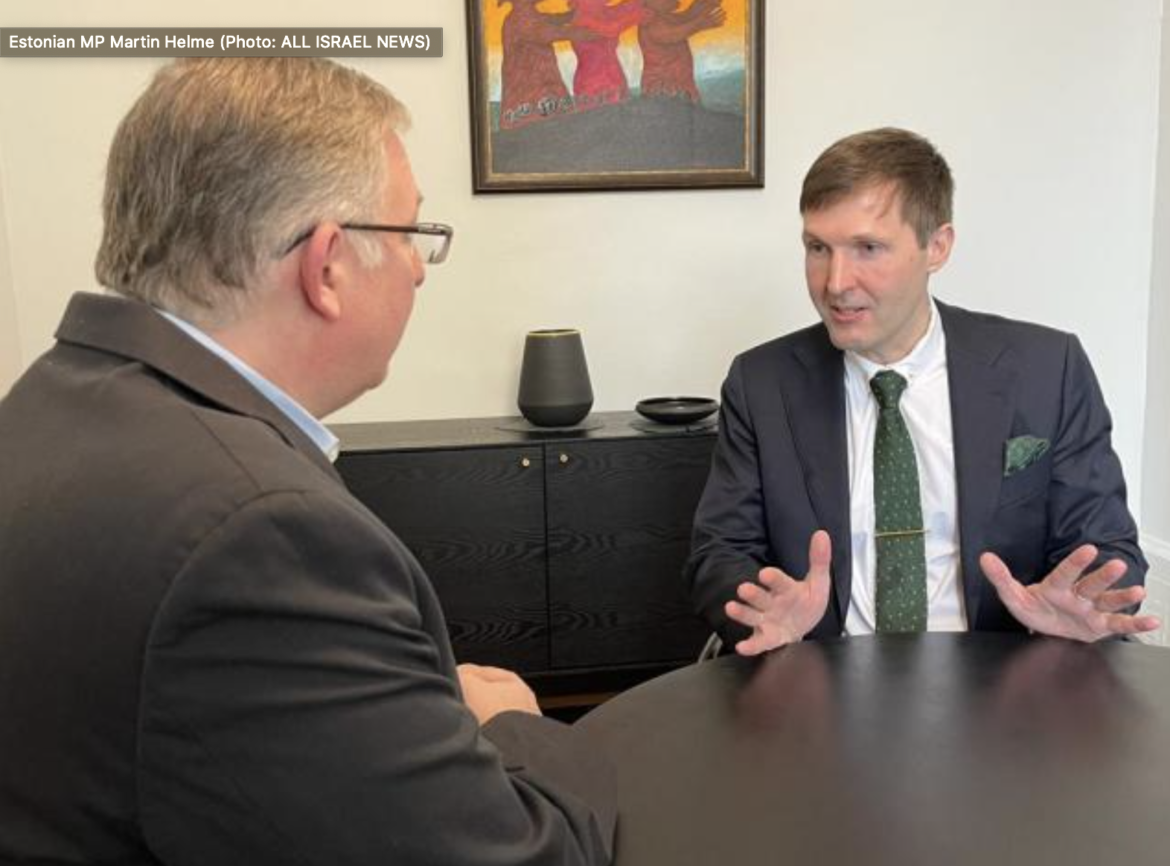 Could Martin Helme become the next prime minister of Estonia?

His enemies – and he has plenty – cringe at the very notion.

But it’s suddenly within the realm of possibility.

Helme, 45, is Estonia’s former minister of Finance and is currently the leader of the opposition in Parliament.

He is also the leader of the Conservative People’s Party of Estonia (EKRE).

The party was previously led by his father, Mart, who recently served as interior minister and back in the late-1990s served as Estonia’s ambassador to Russia.

Under the son, EKRE is now leading in the polls and is more popular than any other time in its 10-year history.

Elections are scheduled for March 2023, but they could take place sooner, given that the governing Reform Party – led by current Prime Minister Kaja Kallas – has dropped 12 points over the past year, including nearly 5 points in the past five weeks.

WHO IS MARTIN HELME?

So, who is Martin Helme?

In his first-ever interview with an Israeli media outlet, Helme sat down with me here in the Estonian capital for an exclusive interview with ALL ISRAEL NEWS. We spoke for two hours, including nearly 30 minutes on the record.

As the founder and editor-in-chief of a non-profit and, thus, non-partisan site, ALL ISRAEL NEWS, I didn’t come to the interview with my own position on Helme. I just wanted to understand what he believes and what he wants – and he wasn’t shy about telling me.

Though he and his party are vilified by left-wing politicians and much of the so-called mainstream media as “far right-wing extremists” and “radicals,” Helme says nothing could be further from the truth.

“We are conservatives in a very traditional Christian way, which I think is something that would resonate with Christians everywhere,” he told me.

The secular media and political elites hate him precisely because he’s a proud conservative who loves his country, wants to protect it from all threats foreign and domestic, attends church weekly and isn’t ashamed to defend Christian values and principles, including defending traditional marriage between a man and a woman as defined in the Bible – a principle held dear by both Jews and Christians.

Helme unapologetically opposes throwing the doors of his country open to uncontrolled mass immigration, such as is practiced in Western Europe where millions of Muslims from North Africa are flooding in, creating serious security problems and leading to terrible increases in terrorism and anti-Semitic attacks.

He acknowledges that in the past he has sometimes phrased his views in ways that he wishes he could take back, and that several members of his party have occasionally said things “I don’t agree with” and are “just plain stupid.”

But, he said he will never apologize for his Christian or conservative principles and that he’s ready to lead Estonia in a better direction.

HOW DOES HELME SEE THE CURRENT ESTONIAN GOVERNMENT?

I asked Helme how he views Prime Minister Kallas and why he thinks she is sinking in the polls.

“Kallas is an unusually weak politician who has no understanding of politics at all,” he said.

HOW DOES HELME SEE THE JEWISH PEOPLE?

Helmi declared unequivocally that he sees the Jewish people as God’s “Chosen People,” and he denounced anti-Semitism, which he said is “exploding” today, not in Estonia but in Western Europe.

“I don’t think there are that many neo-Nazis in the world left,” he said. “Basically, anti-Semitism [in Europe] nowadays purely comes from Islamic countries, and with these people who migrate from Islamic countries to Europe, the attacks on Jews everywhere they become a large minority have been exploding.”

“It is completely irrational and folly to go against God’s chosen people,” Helme argued. “What’s the point of it? How can you be that stupid?”

HOW DOES HELME VIEW ISRAEL?

“I can say for myself, personally, and for the leadership of the party, we are very pro-Israel,” he told me.

I asked him, “As either prime minister or somebody central in a future – possibly, near-term – government, what’s your position on where the Estonian embassy should be in Israel?”

“I think it’s a no brainer,” Helme said. “If Israel says its capital is Jerusalem, then we should have our embassy in Israel’s capital.

“And you would move it, if you had the chance?” I asked.

He knows such a move “would probably bring about heavy criticism from all the usual suspects,” but he doesn’t care.

“It’s not a very difficult move to make.”

HOW WOULD HELME STRENGTHEN TIES WITH ISRAEL?

I asked Helme if he could foresee a scenario in which Estonia and Israel might work more closely together on security matters.

He surprised me by saying he wants to pursue a major arms deal with Israel and dramatically increase his country’s working ties with the Jewish state.

“Estonia and Israel, we have the same problem,” he said. “There is no strategic depth. I mean, the country is just small. Yeah, Israel is even more stretched out than Estonia, but basically the territory we are in is the same ballpark. So you have very, very little room to fall back to. And that means you have to have weapon systems that are up and running and are capable of stopping them [the enemies] right away.“

“So we, really, really need mid-range air defense [system] for yesterday. We can’t go to your usual procurement process where it takes two years to procure, and then another two years to get the stuff in here, and then the next two years to train the people. We need them as if we were in the war already. So, that means a state-with-state agreement – an arms deal between two governments – and it’s as simple as that. And I think there are really only very few places in the world where we can go to such a deal, and one of those places would be Israel, in my view.”

HOW DOES HELME SEE THE RUSSIA THREAT?

Helme told me that he is grateful that his country is a faithful and committed member of NATO.

That means Estonia is afforded the protection of Article Five of the alliance’s charter, which states that if one member country is attacked then all the others will come to its defense.

For a small country of just 1.3 million people that borders directly on Russia, Estonia needs such allies.

After all, he noted, Estonia is a nation once occupied by Nazi Germany and later by the Soviet empire and Helme is determined to maintain its freedom and sovereignty, come what may.

As a result, Helme is also a firm believer in the rest of the NATO charter, such as Article Three which states that all member countries, “by means of continuous and effective self-help and mutual aid, will maintain and develop their individual and collective capacity to resist armed attack.”

With Russian President Vladimir Putin now threatening to invade Ukraine, Helme says Estonia needs to do far more to dramatically bolster and expand its own defense capabilities in order to slow down a future Russian attack, at least long enough for NATO to mobilize and come to its aid.

This is especially true, he said, given that Putin has already invaded and occupied part of Georgia, all of Crimea, the eastern region of Ukraine known as Donbas, and effectively taken Belarus back into Moscow’s orbit, not to mention Putin’s occupation of Syria and dangerous alliance with Iran.

“What he [Putin] still hasn’t taken back or gathered from the lost bunch [of collapsed Soviet Union republics] is Ukraine and the Baltic countries,” Helme noted.

“So, if he’s done with Ukraine, he’ll come after the Baltic countries. That’s as clear as day to us.”

“In light of what’s going on in Ukraine,” he added, “we need to beef up our own security and our own weapons systems….Every country in the eastern flank of NATO needs to beef up their own security in order for NATO to actually work.”

In addition to his Christian belief of Israel’s importance to God, Helme believes Estonia’s security imperatives make a close strategic alliance with Israel an imperative as well.

To read the full transcript of the interview, please click here.