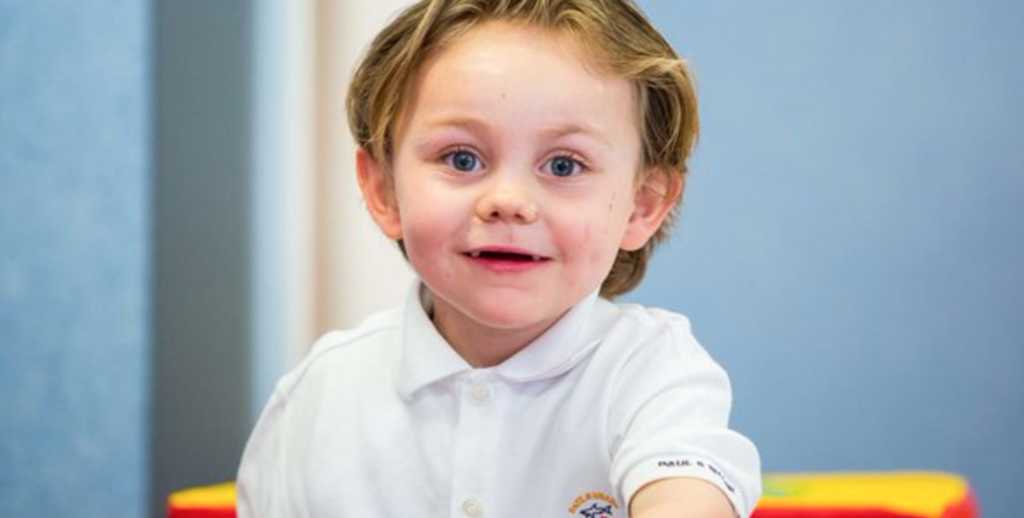 Whoever says miracles don’t happen hasn’t meant John-Henry Birtle, a walking, talking, 4-year-old miracle. After laying motionless at the bottom of a hotel swimming pool for almost ten minutes and then being revived for almost 20 minutes, John-Henry was oxygen-deprived for nearly half an hour – an unthinkable stressor on his little body and developing brain. U.K. doctors predicted that he wouldn’t walk or talk ever again.

Today – less than three months after this harrowing incident, John-Henry is walking, eating, and drinking normally, and his speech is beginning to return. Read on for the full story of this miracle boy.

Imagine the shock and horror on John-Henry’s mother’s face as she discovered her normally sprightly son slumped motionlessly at the bottom of the hotel swimming pool. She quickly jumped into action, diving into the pool to rescue him. Onlookers feared she was too late. But Roseann knew exactly what to do.

As hotel staff administered twenty minutes of CPR, Roseann and her family fervently prayed. According to Roseann, “We were praying the whole time the lady was giving him CPR, and I had faith that God was going to heal him.”

Finally after twenty unbearable minutes of CPR – likely the longest-lasting twenty minutes of Roseann’s life – hotel staff felt a pulse! John-Henry would live! But his battle was far from over.

The young boy spent thirteen days on life support at John Radcliffe Hospital in Oxford. Then he was transferred to Nottingham Children’s Hospital for rehabilitation and specialized treatment. Doctors repeatedly told John-Henry’s parents that his days of walking and talking were over. But his parents never gave up hope.

Roseann tells the rest of the miracle: “Doctors said he won’t have a good quality of life, he would not walk or talk or be able to recognize us, but he proved them all wrong and actually walked out of the hospital five weeks later.” What a triumph! After working extensively with physical therapists, John-Henry is resuming normal childhood activities. Praise the Lord!

Roseann fittingly calls her resilient son “my miracle boy” as a tribute to God’s answer to her prayers. Chief Executive of Nottingham Hospitals Charity, Barbara Cathcart, stated, “This is a remarkable story of hope and healing and we wish John-Henry well for his continued recovery.”

Roseann and her husband Lewis whole-heartedly thank the doctors and hospital staff that cared for their son, serving as the hands and feet of God. Roseann remarked, “All the clinical staff, the nurses, speech therapists, the physio team, and occupational therapy team have been absolutely fantastic. When you get to spend a long time in hospital you see how hard they work and what a brilliant job they do.”

Lewis raised money for Nottingham Children’s Hospital by taking part in a Tough Mudder challenge at Belvoir Castle on May 20. The hospital aims to raise €3 million for parent and family accommodation, cutting-edge research, and state-of-the-art treatment equipment.

In the face of complete disaster – her son starving for oxygen – Roseanna demonstrated unshakeable, transformational faith. She had done all she could by diving into the pool to save him, and she understood that the rest was in God’s hands.

Here is Roseann’s secret that’s not so secret (it appears again and again throughout the Bible): God intimately loves and cares for his people. He’s ready to help – and not only that – he has the power to help.

As modern societies continue to tame the environment and become further removed from His Creation, we run the risk of believing that we are self-sufficient and all-powerful. Interestingly, in some of the poorest parts of the world, people are flocking to church in droves, seeking God’s healing power. But in more developed countries, many people lose faith as they rely solely on their own strength – a dead-end feat.

No matter how advanced society gets, no matter how many technological advances, remember that the most powerful Healer is above – our one and only God. John-Henry’s story – and his mother’s faithful prayers – serve as an incredible reminder of Matthew 17:20:

“Truly I tell you, if you have faith as small as a mustard seed, you can say to this mountain, ‘Move from here to there,’ and it will move.”

Do you have faith the size of a mustard seed today?