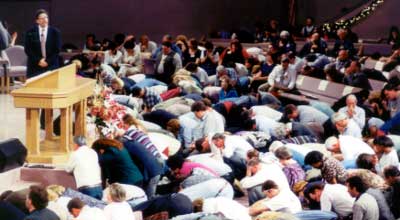 This Father’s Day marked the twenty year anniversary my wife and I became Christians. We have been married twenty-three years now. We met while we were both attending the same college in Chattanooga, Tennessee. I graduated and took my first job at a local CPA firm. After a few years, I got out of public accounting and found a job at a hospital. I took it in part to try to help my marriage by reducing the amount of travel I was doing. Within a few short years of marriage, we both felt more like roommates than a married couple.

We Made Lots of Mistakes

As a young couple, we made lots of mistakes. We fought non-stop. Adding stress was the fact that Kathy suffered from chronic neck and back pain from car wrecks. We both drank a lot and partied to the point we were drinking more nights a week than not. From a spiritual perspective, I’d grown up in the church until I became a teenager. Kathy, on the other hand, was basically unchurched. We both believed in God but neither of us knew Him on a personal basis. As our marriage struggles intensified we’d talk about getting involved in church but would never actually take any steps do so.

In 1997, God used the loss of two family members to really impact my life. My 16-year-old cousin who I was pretty close to died in an automobile accident. God showed me through that tragedy that none of us have the guarantee of tomorrow. By that point I’d been resisting God for years, knowing I wasn’t living right and yet determined to live life to its fullest without God. My plan was to enjoy life while I was young and then settle down later once we were older and had sown all of our wild oats. Through losing my young cousin I realized the critical flaw in my assumption that I had plenty of time to change the course of my life in the future. In reality, none of us have the guarantee of tomorrow.

A few weeks after my aunt’s funeral, I was talking with my sister on the phone.  The conversation turned to how Kathy and I were unhappy and struggling. My sister said there was a revival going on at a church in Pensacola.  Her church was planning on taking their youth group in a few weeks, She invited us to go along as chaperones. She explained people from all over the world had been going to this church. When I went back into the house and told Kathy about it; she immediately said she didn’t want to wait to go in a few weeks, that we should just go the next weekend ourselves. I made up every excuse of why that was too soon and why it wouldn’t work, and she shot down every argument and countered with why we could.

And that is how two lost people planned a trip to drive six and a half hours away to the Brownsville revival in June 1997. We fought the entire drive like cats and dogs. We got to Pensacola and got a hotel room. Then we went to find the church.  We turned onto the church campus and saw people lined up five wide. The line stretched the entire length of the parking lot to the street and back up the other side. It was mind blowing. I had never seen anything like this. People line up for sporting events and concerts.  I had never seen hundreds of people lining up to get in a church?

Everyone was so nice

So we parked the car and got in line like everyone else. We were scared if we left we wouldn’t be able to get into the service that night, even though it was hours away. And we’d come so far and were so desperate for things to change in our lives.Waiting in line was a little surreal. Everyone we met was friendly and talked to us as if we were Christians like them. We didn’t understand some of what they said, lacking any real church background or experience ourselves. So we just smiled and acted like we knew what they were talking about. Of course, no one really pressed the issue. Who would expect two lost people to drive six and a half hours to a revival service?  On Fathers Day weekend no less?

These people are either crazy or have something I don’t

Once the church doors opened we made our way into the sanctuary and ended up in the balcony. I’ll never forget the worship service.  Lyndell Cooley sang one worship song after another. We watched stunned from the balcony as people danced in the aisles, shouted out praise to God and lifted their hands heavenward. Other people were laid out under the power of God. I’d never come close to seeing anything like it. I thought, “These people are either all crazy, or they have something in their lives that I do not. Regardless, they certainly believe in what they are doing 110%.”

“Get the sin out of your life!”

After worshiping for several hours, Steve Hill got up and preached his message “Summer Camp”. In typical Steve Hill fashion, he preached a hard sermon about sin and going to hell. He described three types of people, those who reject the gospel outright, those who postpone reacting to it, like I had been doing, and those who willingly accept it. It’s hard to describe in words the conviction I felt sitting in that church. Although we were sitting up in the balcony, I can still remember his piercing blue-grey eyes looking right at me and saying, “Sir, you need to get the sin out of your life!” Even his hand gestures were anointed and it seemed as if he’d point his finger right at me, the whole time calling out my sin.

By the end of the sermon, I was convinced I needed to get saved and repent for my sins. I couldn’t wait for the altar call to finally come. When he finally did open them up Kathy turned to me and asked if we should go down. I told her, this is a decision you have to decide for yourself, but I was going. I jumped up and headed down the stairs and glanced back and saw her coming behind me. We both ran down to the altars and got on our faces before God and prayed the sinner’s prayer with Steve Hill.

That began the most amazing journey with God. We traveled back to Pensacola frequently. Every weekend God was moving. He delivered us from alcohol immediately. After getting saved just the smell of beer made me nauseous. The second week we went back and Pastor Kilpatrick received a word of knowledge that God wanted to heal someone. He said they should pray and ask God to heal them. Kathy prayed and was instantly healed from all of her chronic neck and back pain. And thankfully over time, God healed our marriage.  Not by “fixing” the other person, but enabling us to walk in love and forgiveness towards one another. My wife and I are two lives radically transformed by God at the Brownsville Revival. After twenty years my only regret is not surrendering my life sooner to God.