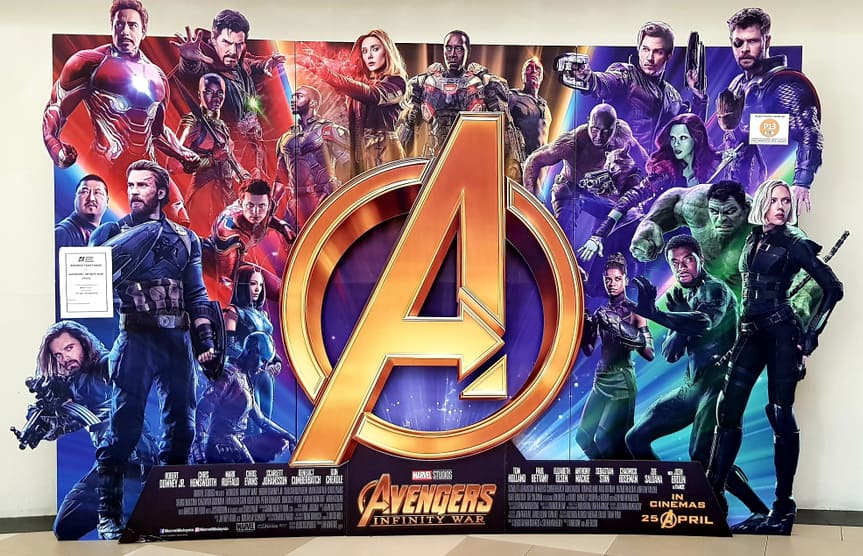 Avengers Infinity War – ‘a compilation of the greatest superhero hits’

A better title for Avengers Infinity War might be Now That’s What I Call Marvel, or The Lord of the Infinity Stones. This film feels like a compilation album of greatest superhero hits on the scale of Tolkien’s masterpiece. As with all Now albums, there are bits I like and bits I’m less keen on. Also, you really do have to have seen the others, or the film won’t make a lick of sense. Most of the other Marvel outings have a good standalone quality, but not this one.

All that said, directors Joe and Anthony Russo do enough consistently right to make this overblown spectacle worthwhile. I won’t say too much about the plot to avoid spoilers, but essentially uber-villain, Thanos, finally graduates from string-pulling background detail to full blown antagonist. He wants to obtain all six infinity stones, so he can wipe out half the Universe in a lunatic act of galactic population control. As ever it’s up to the Avengers to stop him, but do they stand a chance in their post Civil War fractured line-ups?

Thanos is one of the film’s chief strengths. He is essentially a science fiction personification of a popular Illuminati conspiracy theory about radically cutting unsustainable populations (google “Georgia Guidestones population reduction” if you’re curious). He is well established as a serious threat from the very first scene, and his misguided desire to play God is interesting, as is his relationship with his adopted daughter.

The Avengers and their allies (including the Guardians of the Galaxy) are divided into a number of amusing configurations to deal with the various subplots; Thor with Rocket Racoon (who he amusingly calls “rabbit”), Peter Quill and the other guardians with Iron Man, Spider-man and Dr Strange, and Captain America with Bruce Banner, Vision, Scarlet Witch, War Machine and Black Widow. Eventually other Marvel heroes, including Black Panther, get drawn into the conflict.

Witty banter is in good supply, and the action sequences and visual effects are as thrilling as one might expect. However, the juggling of subplots doesn’t always work. Some of the shifts in tone are jarring, and inevitably some much loved characters are underused (this time Captain America gets the short end of the stick). On the plus side, the cast all do great jobs in roles that they are now very used to, with the likes of Chris Hemsworth, Robert Downey Jr, Benedict Cumberbatch, Mark Ruffalo, Elizabeth Olson, Zoe Saldana, Tom Holland, Paul Bettany, Chris Pratt and Josh Brolin particularly on form.

(MAJOR SPOILER AHEAD – Don’t read on unless you have seen the film.)

Avengers Infinity War wants to end with a shock, but instead it comes off as a story crying wolf. In the finale, the film ruthlessly dispenses with the likes of Dr Strange, Spider-man, Black Panther, Peter Quill and many others, but we already know these characters are set to return in sequels. Therefore, it lacks dramatic heft and comes off as a cheat. A much more dramatic way to end the film would have been for Thanos to gain all six stones, click his fingers to wipe out half the Universe, and cut to black amid sounds of panic. The Russo Brothers missed a trick here, I feel.

In final analysis, Avengers Infinity War is an entertaining mega-spectacle, albeit a flawed one. Fans will find much to praise, those with a critical eye will find plenty of problems, and the uninitiated will get hopelessly lost.