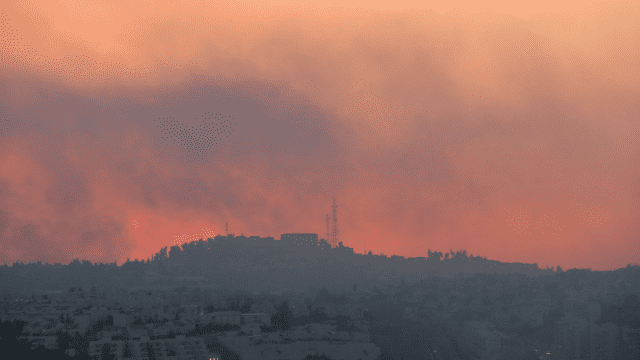 Three weeks after reaching a ceasefire between Hamas and Israel, the conflict sparked again as terrorists caused fires in the south and Israel Defense Forces responded with a strategic airstrike Tuesday.

At least 20 fires were started by incendiary balloons launched from Gaza Tuesday and several more on Wednesday. During the night Tuesday, the IDF struck several military sites in the Gaza Strip.

The fire attacks by Hamas, along with violent protests at the border of Gaza and Israel, coincided with the Flag March, an annual celebration of Jerusalem’s reunification in 1967. On Tuesday, thousands of Israelis celebrated and waved flags as they walked through the Old City of Jerusalem. The march was originally scheduled for May 10 as part of Jerusalem Day but was canceled when the war broke out.

The march is always contentious. But in recent years, the march has been highjacked by right-wing extremists like Itamar Ben Gvir and Bezelel Smotrich. There was some doubt if the new Israeli government would allow the march, but the left-wing Labor’s Omer Barlev, the new minister of public security, allowed the event to take place ‘within confines of the law’ and according to police recommendations.

It was surely a test for the new government, which has been accused by critics as being left-wing. Barlev proved that to be false by allowing the march—we do have freedom of speech in Israel for Arabs and Jews alike—and had 2,000 police keeping the peace with 5,000 marchers. Understand that 5,000 in a country of 6.5 million Jews within a two-hour drive of Jerusalem is quite small and a testament that Israelis reject racism.

Passions are high for both Jews and Arabs, as many far-right Jewish nationals have been known to hurl “death to Arabs” threats at protestors, and Palestinians believe that East Jerusalem will be their capital one day and the Temple Mount where the al-Aqsa mosque resides should be off-limit to Jews.

Hamas also decided to test Prime Minister Bennett and also called for a “Day of Rage” to confront the marchers. They started several fires with incendiary balloons but stopped short of launching a fresh wave of rockets. Israel responded accordingly.

As part of its security measures ahead of the march, Israel had fortified the Iron Dome units and re-routed traffic in and out of Ben Gurion International Airport for the day, sending the planes to the north. While there were violent confrontations during the march through the Old City of Jerusalem and in the West Bank (Biblical Judea and Samaria), police and security forces were able to contain the situation, and the events of the day did not erupt into chaos.