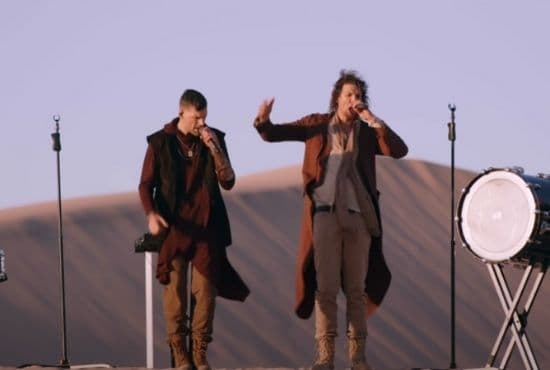 The popular Christian band For King & Country hosted a free concert that raised over $140,000 for Ukrainian refugees.

On March 11, For King & Country released their newest album What Are We Waiting For?, the band’s fifth studio album. It hit No. 7 on the Billboard 200 charts and No. 2 overall on Billboard’s Top Album Sales Charts. It’s the second album of the Grammy Award-winning brothers to hit the Top 10 charts.

To commemorate their success, Joel and Luke Smallbone hosted a free concert on March 25. The concert featured songs from their new album performed live from the Mojave desert in California. This concert was in partnership with Convoy Of Hope, a humanitarian aid organization that provides aid for Ukrainian refugees.

“We’ve put together a special performance from the Mojave Desert playing a good portion of the new record to celebrate and commemorate the launch, and also raise funding for Convoy of Hope as they bring supplies and shelter to Ukrainian refugees in several countries,” For King & Country said.

Funds raised in this concert will be used to aid those families affected by the war in Europe.

“For KING + COUNTRY have an incredible following and for them to call on their fans to partner with Convoy of Hope to help our Ukrainian brothers and sisters really speaks to their hearts,” Hal Donaldson, president, and co-founder of Convoy of Hope, told The Christian Post.

“Through their special concert event, Joel and Luke will enable Convoy to continue to deliver the help, and hope, that is needed in and around Ukraine for the long term. We can’t wait to see how God is going to use this concert to ease suffering,” he added.

What Are We Waiting For?

The album What Are We Waiting For? is about uniting as one amidst all the social issues arising. They explained that social issues are personal issues that have been multiplied. For us to be united, it doesn’t mean that we all have to agree with each other, it just means that we must find a common ground.

“So when I talk about unity, I need to be unified with people that I disagree with [first],” Luke said. “It doesn’t necessarily mean you don’t call spade a spade on certain issues. I’m not saying that. But I am saying there are always places to be able to find some commonality, some common ground.”