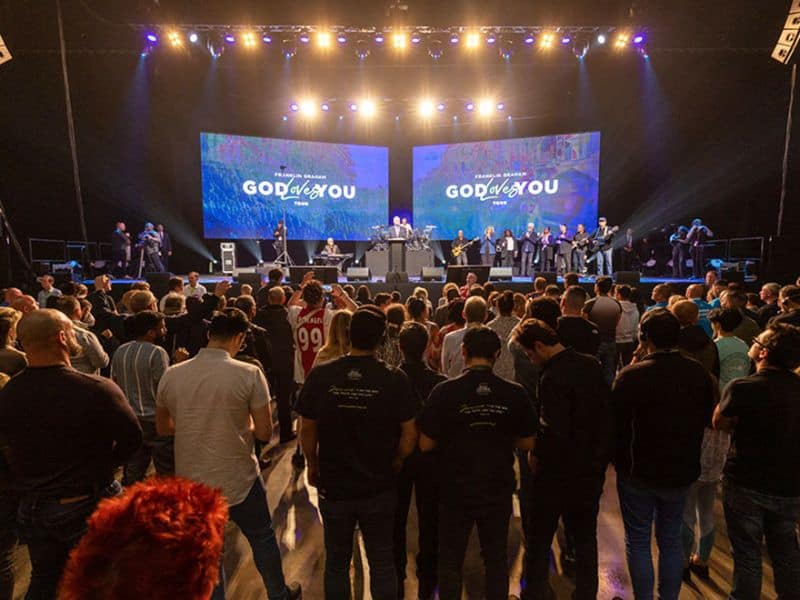 At least 700 people have committed their lives to Jesus during Franklin Graham’s ‘God Loves You Tour’ in the United Kingdom.

Over the last month, the evangelist has toured across the country to share the hope and love in Jesus. He and his team have traveled to Liverpool, Newport, and Sheffield.

According to the Global News Alliance, the conferences have gathered over 11,000 people. And glory be to God, 700 chose to accept Jesus as their Lord and Savior.

Graham, president of the Samaritan’s Purse (a Christian charity organization), has partnered with 2,000 churches in the UK to make the event a success.

Billy Graham Evangelistic Association (BGEA) ‘s UK Director, Robert Chilvers, feels grateful for the overwhelming support the local churches have given them. Today, they train church leaders and pastors to provide follow-ups for those they have evangelized.

He said, “We’ve been training people in the local churches to lead small groups, we call discovery groups, to which inquiries are referred. It’s encouraging to hear that many churches are establishing these groups especially to care for those who are making a response to the Gospel.”

The evangelistic tour was previously pushed back by LGBT complaints. Activists and protesters from the LGBT community referred to Graham as a “hate preacher.” They rejected the evangelist’s promotional ads posted on the buses throughout the city.

But, BGEA responded to the CBN News that the ads were only asking people if they were “looking for something more.” They shared, “There is nothing offensive in these advertisements. The objection is to Rev. Franklin Graham and the Billy Graham Evangelistic Association based on our Christian beliefs. Unfortunately, this opposition is familiar and predictable.”

Indeed, when God does something magnificent to an area or a nation, the enemy will try to oppose it with its schemes. But, God is victorious. Along with His victory are the 700 souls renewed in Christ Jesus.

The God Loves You Tour will continue on July 16 at Excel, London.