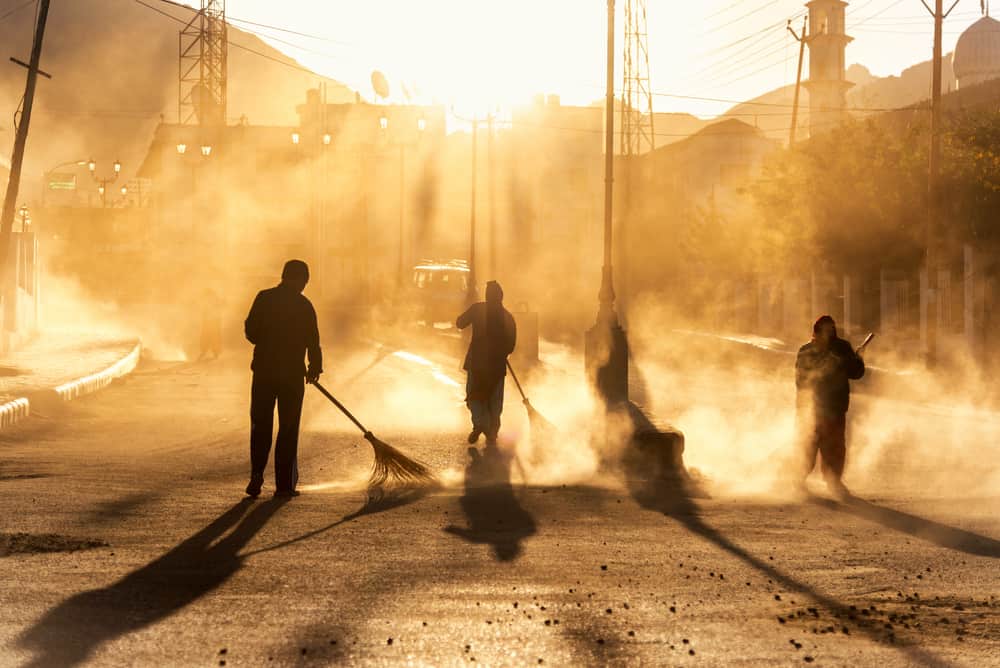 Meet Idris: The Richest Man In the World Who Cleans the Streets

The Richest Man In the World Cleans the Streets

You would not expect to find the richest, most fulfilled man cleaning the streets. But that’s exactly where world-class photographer GMB Akash, founder of First Light Photography, found him. A Bangladeshi documentary photographer, Akash is known for capturing incredible photographs that tell complex, under-reported stories of marginalized populations.

In one of his most recent photographs that has gone viral, Akash captured a subject with a story that is just too captivating to overlook. While the photo itself is striking, the story behind it will leave you reaching for a Kleenex.

Being a street cleaner is not highly respected in Bangladesh. In fact, it is one of the lowest social statuses you can have. So Idris – the subject of Akash’s recent photo – never wanted his daughters to know what he did for a living. According to Idris, “I never wanted them to feel ashamed because of me. When my youngest daughter asked me what I did, I used to tell her hesitantly that I was a laborer.”

But he went even further than that to hide his occupation from his family. “Before I went back home every day, I used to take a bath in public toilets so they did not get any hint of the work I was doing,” he humbly recounted. What could possibly motivate Idris to work hours on end under these conditions?

“I wanted to send my daughters to school to educate them. I wanted them to stand in front of people with dignity. I never wanted anyone to look down upon them like how everyone did to me,” explained Idris. Idris, himself, was born dirt poor and has remained that way throughout his life – despite his hard work day in and day out.

In Bangladesh, as in most societies, it is extremely difficult to move to a higher socioeconomic status – especially when you are born on the lowest rung of the ladder. The best he could hope for was to devote his life to lifting his daughters up out of the mess of poverty. So he did just that.

Idris matter-of-factly stated, “I invested every penny of my earnings for my daughters’ education. I never bought a new shirt, instead using the money to buy books for them.” What sacrifice!

As most parents know, childhood flies by too quickly. When it was time for his first daughter to go to college, he still hadn’t earned enough funds to pay for her college admissions. Utterly defeated, he couldn’t manage to work that day. I’ll let Idris tell the story from here:

“I was sitting beside the rubbish, trying hard to hide my tears. All my coworkers were looking at me, but no one came to speak to me. I had failed and felt heartbroken. I had not idea how to face my daughter who would ask me about the admission fees once I got back home.”

But then – an answer to his prayers: “The cleaners came to me, sat beside me and asked if I considered them as brothers. Before I could answer, they handed me their one day’s income. When I tried to refuse everyone, they confronted me saying, ‘We will starve today if needed, but our daughter has to go to college.’ I couldn’t reply to them. That day I did not take a shower. I went back to my house like a cleaner.”

He could no longer be ashamed of a profession in which the bond of brotherhood was so strong. It is because of these brothers that his daughter will finish college soon!

Poor in Possessions, Rich in Spirit

After realizing their father’s long-term sacrifice for them, Idris’s daughters refuse to let him go to work anymore. His college-aged daughter has a part time job while going to school. Even though her funds are tight, she manages to feed her father and his former co-workers – all those who made her education possible.

The fellow street cleaners laugh and ask why she feeds them so often. She replies, “All of you starved for me that day so I can become what I am today. Pray for me that I can feed you all, every day.”

Idris sums up his story in this profound way, “Nowadays I don’t feel like I am a poor man. Whoever has such children, how can he be poor?” True enough, the love that Idris has cultivated in his life overflows; it is enough to make him rich in spirit. Though you might find him on the street, deep down Idris is a rich man indeed.