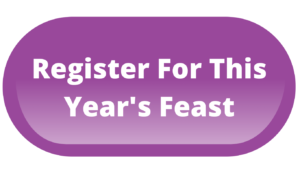 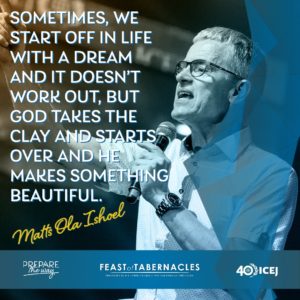 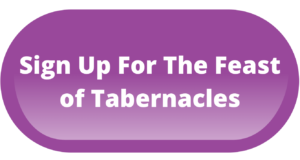 The Past: Remembering the God of Provision

The Present: Celebrating His Presence Today

Sign up for the annual Christian celebration of the Feast of Tabernacles here. 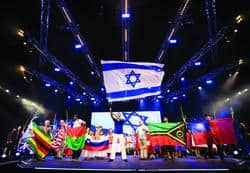 Why Christians Celebrate The Feast Of Tabernacles

The presence of believers from around the world in Jerusalem at Sukkot is a great prophetic sign of the times in which we live. It is a powerful foreshadowing of even more glorious days ahead. In 1979, as Merv and Merla Watson planned the first Feast of Tabernacles celebration in Jerusalem, they were uncertain about exactly how Gentiles should celebrate this biblical feast, so they asked the advice of a senior rabbi in Israel. After receiving his practical guidance, they were just about to leave when the rabbi called them back.

And this is what the Feast of Tabernacles is all about. The ICEJ has been privileged to organise this incredibly unique event for 40 years now. And it is indeed not just another Christian conference, but a prophetic declaration to Israel and the Church that Messiah is coming soon. In the end, it is all about Jesus. It is not about us, nor even about Israel, but about the returning King.

And so, this Feast of Tabernacles 2020, ICEJ “Prepares the Way” for the return of Jesus, the King above all kings, to His city: Jerusalem.

PREPARE THE WAY – Feast of Tabernacles 2020

Isaiah 40:1,3 – “Comfort, yes, comfort My people!” says your God… The voice of one crying in the wilderness: “Prepare the way of the Lord; Make straight in the desert a highway for our God.”

For 2000 years, the stones of antisemitism blocked the path between Jews and Christians. How do we overcome that?

Forty years ago, Christians from 32 nations gathered in Jerusalem to celebrate the Feast of Tabernacles just as the last national embassies were abandoning the city. In response, these Christians stepped out and offered a hand of friendship and solidarity to Israel and the Jewish people. From this pivotal moment, the International Christian Embassy Jerusalem was born.

Today, we continue to follow the path of those Christians who have gone before us. Isaiah spoke of a ministry of comfort and a prophetic work to prepare a highway for the Lord – a work of removing the stones and obstacles which have, in the past, separated Jews and Christians.

The prophet Isaiah also foretold of a day when a highway would connect Egypt and Assyria with Israel – and become a blessing in the midst of the earth. Today, we see believers from these nations coming together; pages of the Bible coming to life before our very eyes. The ancient division between Arab and Jew is being reconciled.

“Every valley shall be exalted and every mountain and hill brought low; The crooked places shall be made straight and the rough places smooth; The glory of the Lord shall be revealed and all flesh shall see it together; For the mouth of the Lord has spoken.” – Isaiah 40:4-5

At the Feast of Tabernacles 2020, the ICEJ will be marking 40 years of comforting and blessing Israel and working toward reconciliation between the Jewish people and the Gentile nations, especially in the Arab world.

We invite you to come up to Jerusalem to celebrate the Feast of Tabernacles with us. Come clear the path; remove every hindrance between you and an encounter with the God of Israel.

Full conference ticket including the 7-day celebration and access to all seminar tracks until October 2021. Includes the ICEJ 40th Anniversary Souvenir Book, 40th Anniversary olive wood communion cup, and a digital certificate of attendance to the Feast of Tabernacles.

Full conference including 7-day celebration, access to all seminar tracks until October 2021. Includes the ICEJ 40th Anniversary Souvenir Book, 40th Anniversary olive wood communion cup, and a digital certificate of attendance to the Feast of Tabernacles. 50 USD allocated to donations as Feast firstfruit offering and aid for Holocaust survivors in Israel.

*LIMITED TICKETS!!!* Bless Israel Package upgrade including an hour Q&A session with a VIP. Further details on password protected meeting will be announced the week before the conference. Bless Israel Package: Full conference including 7-day celebration, access to all seminar tracks until October 2021. Includes the ICEJ 40th Anniversary Souvenir Book, 40th Anniversary olive wood communion cup, and a digital certificate of attendance to the Feast of Tabernacles. 50 USD allocated to donations as Feast firstfruit offering and aid for Holocaust survivors in Israel.