BREAKING
Cancer Patient Survives A ‘Death Sentence’ & Receives A Surprise From Jennifer...
TikTok Kid Preacher Feels God In His Prayer Time; “I Am Not...
“Jesus Appeared To Me Twice So That This Message Will Be Delivered...
Home Tags Posts tagged with "Izzy"
Tag: 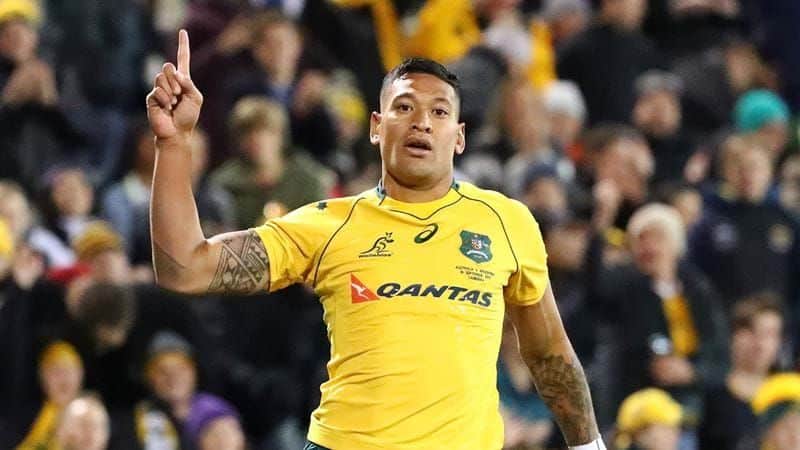 Australian Rugby Star Israel Folau posted an image on his Instagram calling every sinner to repent that may cost him his multi-million dollar contract. This is not the first time that he has got into controversy due to his faith. But this time, he may have to pay a huge price.

Not only could he lost millions but he will no longer play for Australia. His future in Australian rugby will decided at acode of conduct hearing on Saturday May 4th.

A call to repent

On April 10, Israel posted an image on Instagram with a message based on 1 Corinthians 6:9-10. In his post, he calls all sinners to repentance. “Those that are living in sin will end up in Hell unless you repent. Jesus Christ loves you and is giving you time to turn away from your sin and come to Him,” he stated.

Those that are living in Sin will end up in Hell unless you repent. Jesus Christ loves you and is giving you time to turn away from your sin and come to him. _______________ Now the works of the flesh are manifest, which are these , adultery, fornication, uncleanness, lasciviousness, idolatry, witchcraft, hatred, variance, emulations, wrath, strife, seditions, heresies, envyings, murders, drunkenness, revelings, and such like: of the which I tell you before, as I have also told you in time past, that they which do such things shall not inherit the kingdom of God. Galatians 5:19‭-‬21 KJV _______________ Then Peter said unto them, Repent, and be baptized every one of you in the name of Jesus Christ for the remission of sins, and ye shall receive the gift of the Holy Ghost. Acts 2:38 KJV _______________ And the times of this ignorance God winked at; but now commandeth all men every where to repent: Acts 17:30 KJV _______________

Rugby Australia’s CEO, Raelene Castle expressed her dismay at Israel’s actions and has removed him from the national team.The rugby authorities fear his message has offended the LGBT community. However, they have emphasized that they’re not discriminating against the player’s religion.

“This is not a religious discussion, this is a discussion around the employee, employer relationship and the values in the contractual arrangements within that agreement,” Raelene said. “Israel committed a high-level breach of the Professional Players’ Code of Conduct warranting termination of his employment contract,” she added.

According to the Australian Associated Press “The Wallabies superstar” will face a tribunal on May 4th that will determine his future. Pray for God’s intervention, that Israel may continue to play for Australia and represent the nation in the World Cup in Japan later this year.

Although Israel loves sport, his love for Jesus is greater

“First and foremost, I live for God now. Whatever He wants me to do, I believe His plans for me are better than whatever I can think. If that’s not to continue playing, so be it. In saying that, obviously I love playing footy and if it goes down that path I’ll definitely miss it. But my faith in Jesus Christ is what comes first,” Israel stated.

Let our love for Jesus Christ always be greater than all our passion and career. Share this to remind everyone to put God first in anything!