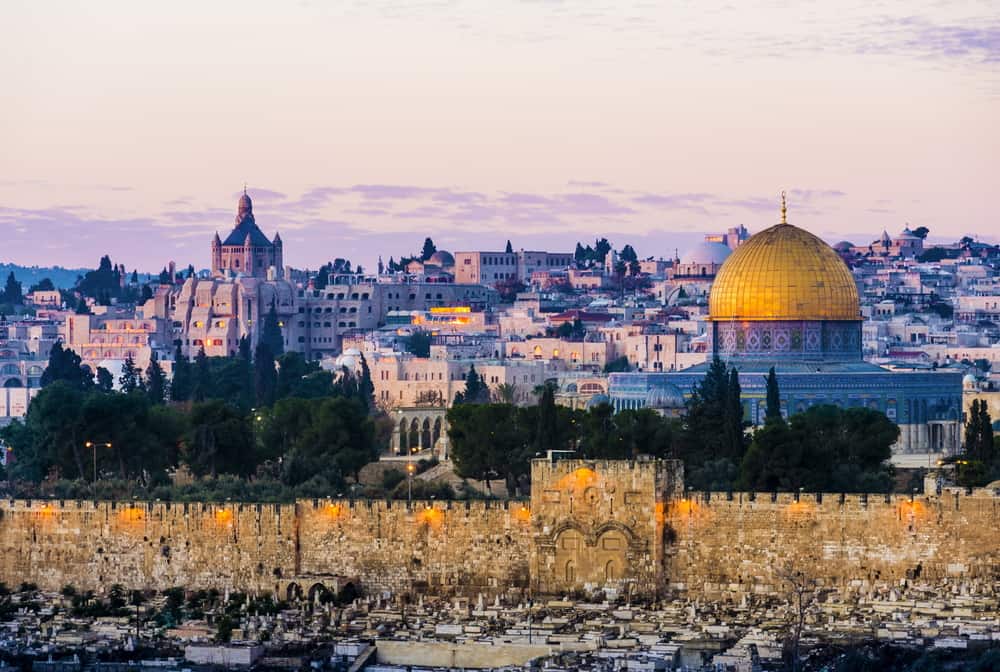 Jerusalem is the capital of Israel. It’s something the Bible teaches and we have always known. But, there is a battle for the city that continues to rage in protest against God’s Word. Bible-believing Christians have long supported the city’s status as Israel’s ‘eternal and undivided capital’ and many are now expressing their joy as world leaders finally begin to acknowledge this important fact.

The USA moved it’s embassy to Jerusalem on May 14th 2018, followed soon after by Guatemala and Paraguay. GOD TV congratulates these countries and particularly US President Donald Trump and Vice President Mike Pence for leading the way in the face of international condemnation.

We have always considered Jerusalem as Israel’s capital and have had a significant presence there since 2001. Both our CEO, Ward Simpson and the GOD TV family share a passion to bless the people of the Middle East. “What an amazing bold move, it’s a historic and important day for Israel,” Ward said after hearing the news that the USA would finally move its embassy to Jerusalem.

Speaking at addressed a Christian Media Summit in Jerusalem in 2017,  Ward shared GOD TV’s mandate to be a voice for Israel as an advocate and defender. “The Bible declares ‘Jerusalem will be cup of trembling for the nations’,” he says.  “It seems all hell has broken lose after the President’s decision with many opposing him.  It’s a critical time in history. We need to pray earnestly for the USA President, Israel and the peace of Jerusalem.”

The Battle For Jerusalem

1in 1917 the British ended Ottoman Turkish rule in Palestine. This victory made it possible for the Balfour Declaration to be implemented. This was the start of establishing the Jewish homeland. On December 11, 1917 General Allenby walked into the Holy City humbly marking its liberation. 50 years later, in 1957, the Israeli Army reunified Jerusalem. Now after another 50 years the US President has recognized the Jewish capital, having moved the US embassy from Tel Aviv. Bible-believing Christians are jubilant about this.

While the President’s action has been criticized, in moving the US Embassy to Jerusalem, Donald Trump was only implementing what the US Government voted for. The US Congress passed The Jerusalem Embassy Act, 93-5 and the House of Representatives, 374-37. Successive Presidents delayed its implementation, but President Trump has now delivered on what he promised. Some say this is against Peace but as Prime Minister Netanyahu points out, “there can be no peace without Jerusalem.” Furthermore, President Trump genuinely believes this is a step towards peace and not away from it.

GOD TV continues to pray for “The peace of Jerusalem” as we do regularly, including our participation in the annual Day of Prayer for the Peace of Jerusalem event in the city on the first Sunday of October each year. GOD TV’s regional director for Israel, Ron Cantor often talks about Jerusalem on his Out of Zion series. He provides valuable insight into this new development with 10 Reasons We Support Trump’s Recognition of Jerusalem as the Israeli Capital. You can also read: In Our Hands – The Battle for Jerusalem a must-watch CBN-produced film that focuses on how the Israelis took the city in 1967.

Speaking to Ward on GOD TV Broadcast, Rabbi Jonathan Bernis of Jewish Voice shared his thoughts on President Trump’s support for Israel. “America finally acknowledges what we voted for 23 years ago,” Rabbi Bernis observes. “We are aligning ourselves with the Word of God and whenever we to that, it is a great day!”

Rabbi Bernis believes this is a huge deal for America because he says the USA desperately needs God’s blessing. “Standing with Israel is critical to our destiny as a nation and I feel America has been given another chance to stand for righteousness. The End Times are a period of great trouble as the nations turn against Israel, but we have delayed that in the USA. We are walking into the light as we do this and we are celebrating a correct decision by our government.”

On the same broadcast, Ward’s pastor, John Kilpatrick of Church of His Presence spoke a word of blessing over President Trump.

“We bless our president Donald J Trump. You have come to the Presidency of these United States for such a time as this. A modern day Jehu, you are unafraid to carry out the unpleasant assignments that must be done. What others could not and would not even attempt, you stepped up and shifted the nation out from under godlessness, indecisiveness and leading from behind. You are removing the blindfold over the eyes of lady justice once again, putting salt and light back into the highest court of the land. You are removing the oppressive yoke from the necks of the people and now you have singlehandedly aligned yourself and this nation with the purposes of Jehovah God concerning the nation of Israel and in particular Jerusalem.

“We declare you are protected and defended by the Host of Heaven. Weapons may be formed against you by a myriad of enemies, but they shall not prosper. They will backfire. God shall frustrate the token of the liars. We bless you, your wife Melania and family. Know there is a wall of fire around about you and a canopy of glory over your heads. We declare that although you have just begun you will finish. You will accomplish all God has called you to do. Only time will tell how the gift of your presidency has changed the course of history in this perilous season. God bless you President Trump. We love you and are praying for you.”

Stay tuned to GOD TV for more on Jerusalem

Keep watching GOD TV as we examine all God is doing in the nation that many regard as His prophetic timepiece. Our news partner CBN offers a clear Christian perspective on the Middle East:

You can also watch several series on GOD TV that focus on the issue. These include Jewish Voice with Rabbi Bernis and Roots and Reflections with Barry Segal.