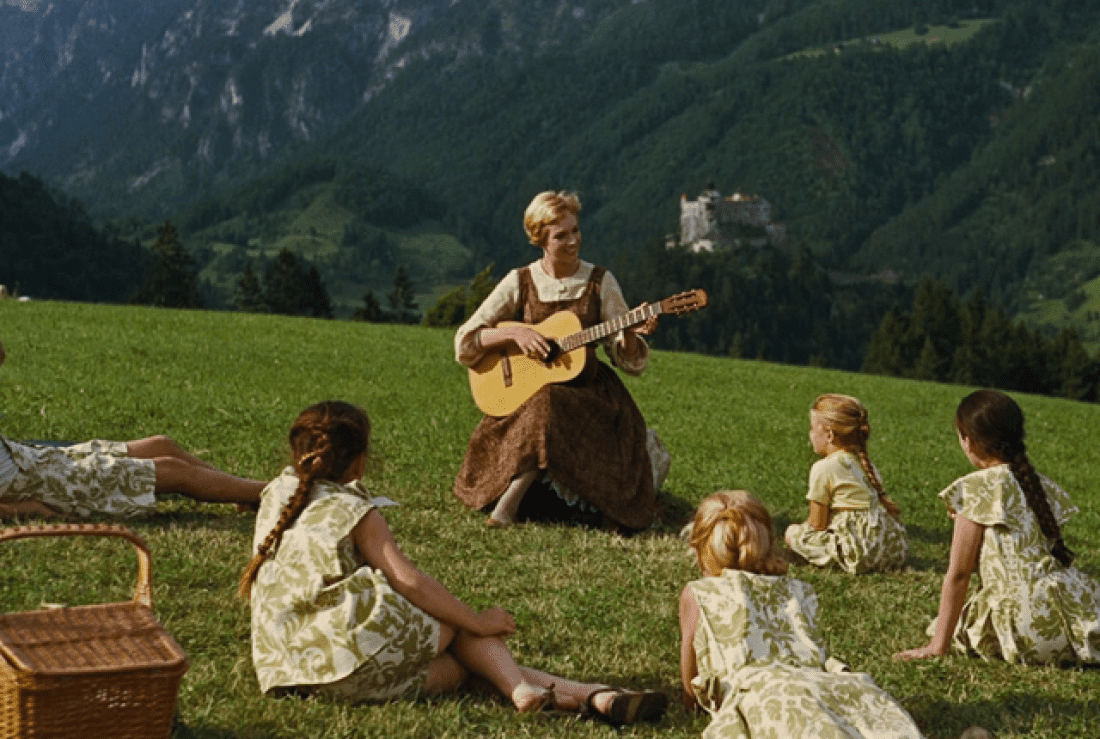 To some, The Sound of Music is a nauseating wallow in sugary sentimentality. I have a certain amount of sympathy with that view, though I must confess I do not share it. For me, The Sound of Music remains, after all these years, a wonderful, uplifting, hugely redemptive story with some of the most memorable songs ever heard in a Hollywood musical.

Adapting the Rodgers/Hammerstein stage play (itself loosely based on a true story), this is director Robert Wise’s most famous film. An extremely versatile director, Wise worked with multiple genres (his last film prior to this was classic horror The Haunting), but before The Sound of Music he had the equally brilliant West Side Story under his belt, which meant he really knew how to stage an epic musical. And epic this is; opening with that incredible helicopter shot over the Alps circa 1930s Austria, culminating in novice nun Maria (Julie Andrews) appearing on the mountainside and singing “the hills are alive…” oh, you know what happens.

But in case you are one of the two people on the planet that don’t, Maria is subsequently sent to be governess to the seven children of Captain Von Trapp (Christopher Plummer), a widower whose grief has driven him to run his home like one of his ships, with all fun, jokes, play and music strictly prohibited. Of course, Maria gradually sets things right, bonding with the children and later falling in love with the Captain himself. The course of true love inevitably has a few bumps along the way (chiefly in the form of Eleanor Parker’s Baroness), but after many classic songs (including Doe-Ray-Me and Favourite Things), and some wisdom from the Mother Superior, a wonderfully elaborate wedding ensues.

Then of course the Nazis in turn up in the last act and ruin everything. Where would movies be without those monumental spoilsports? The Captain, an Austrian patriot, despises the Nazis and all they stand for, but will the Von Trapp family manage to escape to Switzerland? After the Captain is drafted into military service, they have no choice but to try.

Here, in the final stretches of the film, the most interesting spiritual elements kick in. Yes, before then we’ve had lots of heartwarming stuff about the hardness of grief being melted by song, a wonderful metaphor for the Holy Spirit bringing comfort and hope, not to mention love. But standing up against unimaginable evil becomes a key theme in the finale, in terrific moments such as the defiant singing of Edelweiss at a concert with Nazi officials in attendance. Then we have poor, hopelessly-out-of-his-depth Rolf (Daniel Truhitte), a young man whose previous romantic interest in Von Trapp’s eldest daughter Liesel (Charmian Carr) has been driven from him through brainwashing by the Hitler youth. I always find the moment where the Captain begs Rolf to abandon his Nazi allegiance particularly sad, especially as one ill-judged comment from the Captain ultimately causes Rolf to make his tragic choice.

In final analysis, I can think of few films as warm, opulent, and immensely nostalgic as this one. The term “feel good” is often abused, but when it genuinely applies, as it does here, watching really can provide that wonderful sensation of feeling much better when you leave the cinema than before you went in. Yes, it’s all a bit saccharine at times, but every time I watch it, I am bludgeoned into submission by the songs and sheer entertainment factor. Besides, if nothing else, I find it impossible not to blub at Captain Von Trapp’s immensely moving “You brought music back into this house” moment. Pass the tissues…