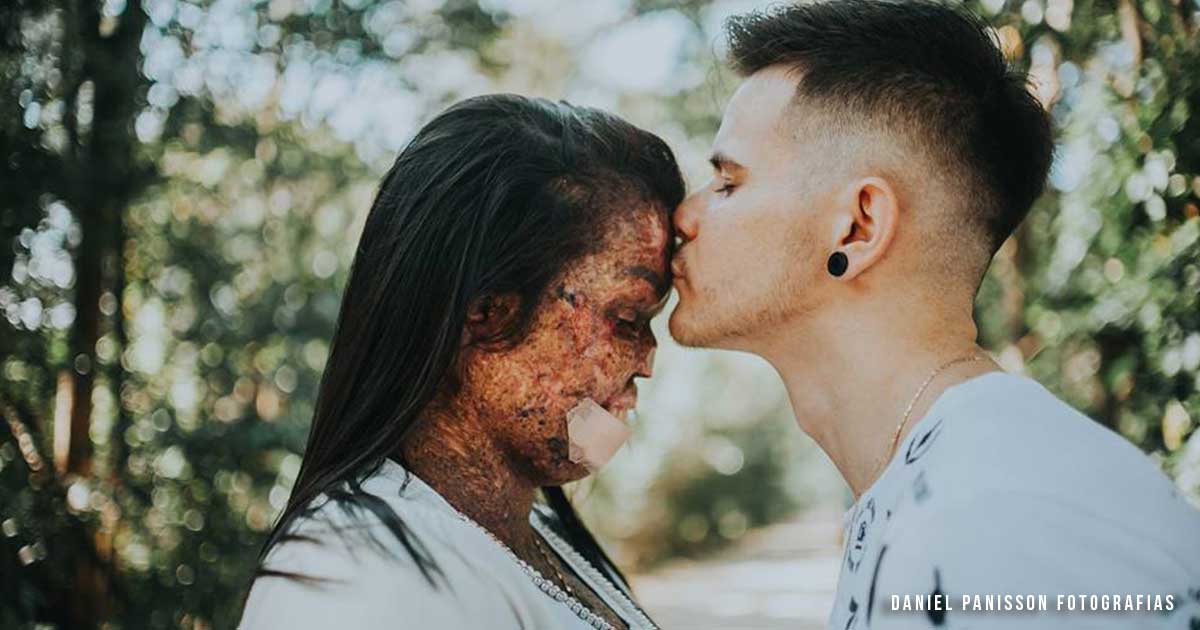 Nowadays, whether we admit it or not, appearance is a big deal for every person.  Perhaps it is human instinct to judge a person’s worth by what they see with their naked eyes. Even in the Old Testament, David was disregarded by his father to be chosen as King because of his lack of stature.

God’s Word leads us to the truth that although the world looks at a man’s appearance, we should learn to see a person’s worth by looking deep into their hearts. And definitely, a man of God, Edmilson Alcântara, from Ceará in Brazil understands this heart of God very well.

Recently, 23-year-old, Edmilson, got engaged to his 28-year-old girlfriend Karine de Souza. What’s more surprising is that regardless of knowing about Karine’s disease, he never hesitated to be betrothed to her.

Karine has a rare skin disease called “Xeroderma Pigmentosum”.  Due to extreme sensitivity to ultraviolet rays (UV), the moment light hits her skin, it causes depigmentation and skin lesions.  According to research, this disease has no cure.  In Karine’s case, it has caused marks and lesions all over her body, which would be reason enough for her to have low self-esteem and avoid contact with other people.

However, even if that was the case, that didn’t stop her from living a normal life because her trust is in God. She is well aware that people judge her by her looks, but she has put her confidence in God alone.  This is what made Edmilson fall in love with her, beyond what eyes can see.

A viral post from Daniel Panisson Fotografias reads: “Have you ever felt love? Have you ever thought about giving up a great love? Have you ever cared about appearance and forgot to worry about feeling? Then I invite you to feel and live the story of Karine and Edmilson. A story so beautiful and full of inspiration that will awaken in the most beautiful sense of life in you.

In a world where appearance matters more than the feeling, they met it was not by chance, it was a meeting of souls, a meeting of acceptance and character and love arose when their souls met and today they are an inspiration for so many people who do not believe in themselves, in life and especially in love.

Karine De Souza, 28 years, from Fortaleza, diagnosed with ‘xeroderma pigmentosum’, a rare, genetic, non-contagious disease that has no cure just treatment. This disease creates injuries through contact with ultraviolet light. But for Edmilson, 23, from Ceará. The disease did not stop a beautiful  love story.

And I can say, having portrayed the love of this couple has brought me peace and a lot of inspiration for soul. The acceptance, protection and all affection involved between the two of them, has made me see that love is not lost.

Karine’s acceptance made me see how useless we are to complain. I only ask one thing, be thankful every day for being who you are. Stop complaining for being what you are. Embrace life, and accept. Much gratitude for teaching me so much. You guys are amazing. You are the hope that is lacking in so many people. Thanks for the strong hug, and for the wonderful day we live together. I carry your smile with me forever.”