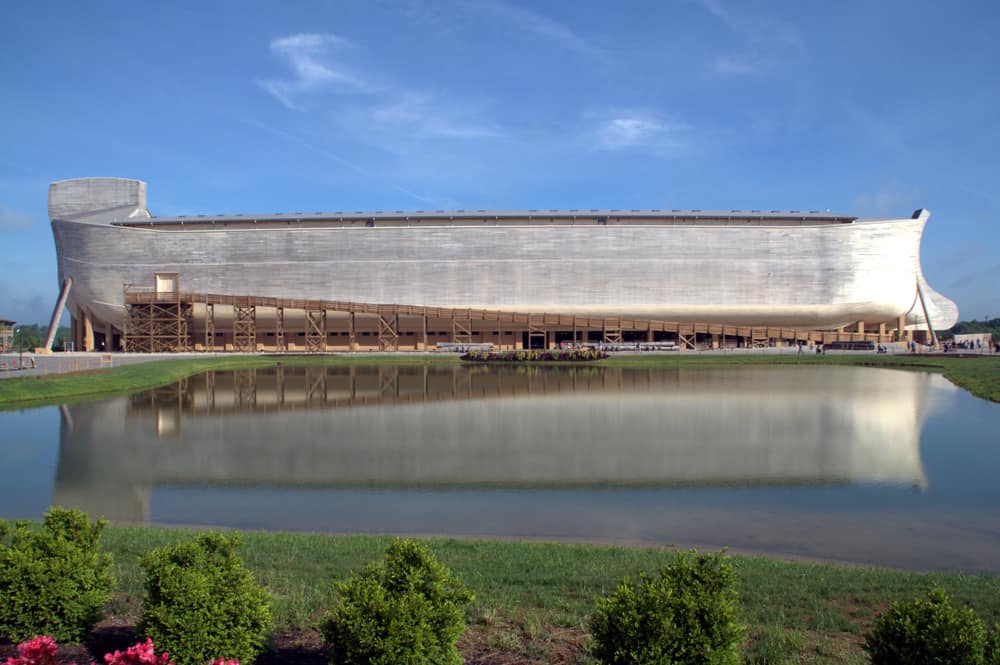 After completing and opening the Creation Museum 1997, Answers in Genesis founder Ken Ham continued to dream. Wanting to reach more people through young earth Creation evangelism, his ministry partnered with Ark Encounter, LLC with a grand vision: build a theme park with a replica of Noah’s Ark using the Biblical dimensions from Genesis 6:9-22!

Genesis 6:14-16 says, “Make yourself an ark of gopher wood. Make rooms in the ark, and cover it inside and out with pitch. This is how you are to make it: the length of the ark 300 cubits, its breadth 50 cubits, and its height 30 cubits. Make a roof for the ark and finish it to a cubit above, and set the door of the ark in its side. Make it with lower, second, and third decks.” A cubit is a measure of length used during Biblical times equal to the length of your forearm. This would normally be about 18 inches or 44 centimeters.

With those dimensions and believing in the commission God gave them, they built the Ark Encounter. It sits at 510 feet long, 85 feet wide and 51 feet high, resting on 800 acres in Williamstown, Kentucky. Stretching an American football field and a half long, it is truly a sight you want to see!

Ken Ham said, “We want to sweep guests away from the hustle and bustle of modern life and bring them to a large hill where the Ark dominates the landscape.”

Its location is 45 miles south of the Creation Museum. Ken said, “The pastoral setting is certainly free of competition from sky-scrapers and the overcrowding of large cities.”

Their website says, “Ark Encounter is a world-class theme park featuring the most authentic full-size replica of Noah’s Ark in the world. Travel back in time on a mile-long scenic bus ride and ascend in view of the massive Ark. Next, take a wild adventure and soar across gorgeous valleys on a zip line tour. Then spot some exotic animals at Ararat Ridge Zoo, or relax with your friends and family at our casual two-story restaurant.”

The Ararat Zoo has Tibetan yaks, kangaroos and ostriches. And your kids can take a ride on a camel or donkey. If you have teenagers, they may love going through an interactive exhibit presented like a graphic novel. It is an adventure called, “Why the Bible is True,” with three characters named Gabriela, Ryo and Andre. This exhibit answers the age-old questions, “Is the Bible really from God? Does the Bible have errors? What about human suffering?”

You can also purchase a graphic novel called The Illustrated Gospel: Searching for Truth using the realistic art style by the designers of “Why the Bible is True.”

Former US President Jimmy Carter visited the Ark Encounter in 2016 even though he is not a creationist. Desiring to support a friend instrumental in the construction of the Ark Encounter. Jimmy said, “The Ark is remarkable. And it’s some of the best wood-working I’ve ever seen. My friend LeRoy Troyer [of the Troyer Group] has done a tremendous job.”

Ozzy Osbourne and his son Jack toured the Ark Encounter for their series Ozzy and Jack’s World Detour. Airing on November 29, 2017, Ozzy asked, “How did Noah keep a T-Rex in a cage?” His son responded, “You know, I’ve thought long and hard about this and I figured it out. T-Rex had little tiny arms. They can’t pick locks.”

Ark staff member Mark Looy said, “On the TV program that aired, you can hear them saying things like, ‘Wow, wow, VERY wow.’ And ‘that is insanely big.’ Plus, ‘absolutely unbelievable.’”

Endorsing the Ark Encounter, Al Gibson of GOD TV says, “The Ark stands as a reminder to the world that God’s Word is true, the history in the Bible is true. And the Gospel message founded in that history is true. Praise the Lord, thousands visit and are impacted daily.”

For more information, click the following link Ark Encounter and watch the video below: