BREAKING
Catch a Ride on a Shared Scooter—“Micro-mobility” Coming to Tel Aviv Next...
Israel Military to Conduct First-ever Simulated Strike on Iran
‘Injury to the Heart of Iran’: Details on the Life and Death...
STAND WITH UKRAINE
Home Tags Posts tagged with "killing christians"
Tag: 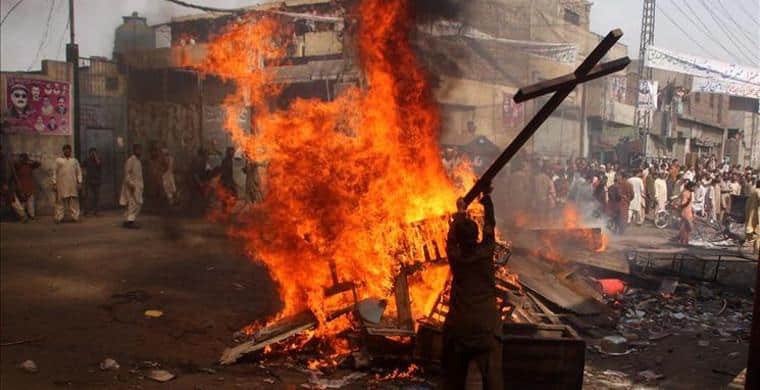 WATCH: “We Have to Stop the Senseless Killing of Christians” – Persecution and the Gospel

Christian Persecution is the Greatest Barbarism of this Century

Just recently churches were bombed in Egypt on Palm Sunday, killing 45 innocent people and focusing the world’s attention, once again, on the plight of Christians who face death and danger daily. Many are rallying worldwide to expose the abominable increase in Christian persecution and GOD TV is committed to standing with those who want to see an end to this terrible tragedy. Together we must do what we can to help our brothers and sisters who suffer for the cause of Christ.

Can Christianity survive in the Middle East?

The news is full of reports of atrocities perpetrated on people for no other reason than their faith. In an article entitled Dying for Christianity: millions at risk amid the rise in persecution across the globe, The Guardian newspaper warns of increases in murder, rape, torture and discrimination against believers in Christ.

“Christians are facing growing persecution around the world, fueled mainly by Islamic extremism and repressive governments,” Harriet Sherwood writes in the UK newspaper, referring to this as ‘a form of genocide’ and advocating the need for campaigners to combat ‘religio-ethnic cleansing’.

‘Attacks Show ISIS’ New Plan: Divide Egypt by Killing Christians’ says a headline in The New York Times exposing the strategy of so-called Islamic State, while The Telegraph questions whether Christianity can survive in the Middle East.

“There is intense questioning about whether Christianity can even survive in the Middle East where the suffering of Christians has been so intense in recent years,” writes Canon Andrew White in an article entitled Christians in the Middle East are close to the edge – but this Easter, I know that there is hope for us all

“We are an Easter people, but we are living in a Good Friday world,” he says. “Nearly all have had loved ones killed, persecuted and tortured, yet they are not without hope.”

Canon White is a trustee of GOD TV and has spent years living amongst and working with Christians in Iraq and now Jordan. It is encouraging to read this report in The Telegraph that despite all these dear people have been through, they still have a bold faith in God and are an inspiration to us to be a more effective witness in our day and in our quest to fight injustice.

“Today there are people who are being slaughtered for their faith as we were in the past,” the Jewish National Fund writes in The Jerusalem Post in an opinion piece titled, We Must Honour The Victims Of The Holocaust By Saving Christians Today. “IS are trying to eradicate the Christian religion from the region and this ethnic and religious cleansing is the greatest barbarism of this century. This cannot go unaddressed.”

We have to stop the senseless killing of Christians… It’s horrific, but what can we do?

Some talk about a ‘Christian holocaust’ and others ask if Christianity could soon be extinct in parts of the world. You can imagine the cries of fellow believers in the persecuted Church, asking “God where are you? Why is this happening?”

What we can know for certain is that God will never abandon His people in the Persecuted Church or forgot about them. He calls upon us, believers in countries where we have freedom of worship, where it is safe for us to attend church, to speak up. We can be the Hands and Feet of Jesus to those who are suffering and a voice of those who cannot speak up for themselves.

First and foremost, we can pray for the safety of Christians worldwide and intercede against an escalation of persecution towards believers. We can can confess Psalm 91 over them, trusting God for their protection. We can also pray for the salvation and transformation of all perpetrators of violence.

Secondly we can be informed about what is going on by watching Christian media such as GOD TV and create awareness of this issue. GOD TV has a wealth of programming which can be viewed online at Persecuted Church Season. We can share information that exposes what is going on, whether in person or via social media. The most used hashtags are #Persecution and #GenocideAwareness.

Thirdly we can support organizations providing humanitarian aid to persecuted believers. One such organization is the Billy Graham Evangelistic Association which has an eye-opening documentary on Christian Persecution and is rallying believers to support The World Summit in Defense of Persecuted Christians.

Persecution and the Gospel

From 22 April GOD TV will be screening Christian Persecution and the Gospel regularly on GOD TV, an eye-opening documentary film from the Billy Graham Evangelistic Association that documents the ongoing onslaught against Christianity in today’s world. “Over 90,000 Christians have lost their lives due to their faith in the past year alone,” BGEA’s Franklin Graham laments. “It’s barbaric, it’s evil and it’s time for us to do something.”

Watch Persecution and the Gospel

Franklin Graham is inviting all Christians to support The World Summit in Defense of Persecuted Christians which being convened by the Billy Graham Evangelistic Association, in Washington, D.C. from May 10-13, 2017. They are planning to bring together hundreds of Church leaders and victims of Christian persecution from around the world to join hands across the denominations to hear firsthand reports of the suffering taking place around the world and intercede for our brothers and sisters in Christ who face death and danger.

Be sure to watch Persecution and the Gospel on GOD TV in April / May and access our online archive. We can all do something. We can all pray and speak out.