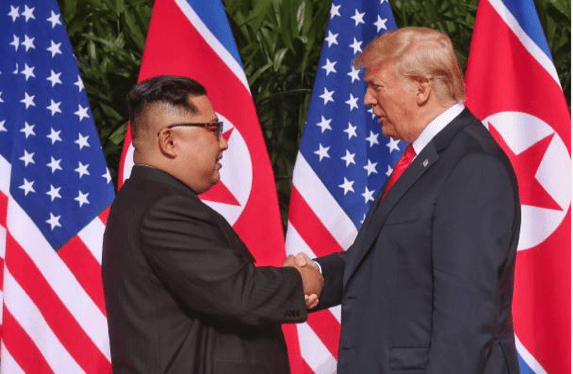 As the world’s news media evaluates the much-publicised Trump-Kim Summit, Christian leaders are hopeful this is a major step forward to peace in the region and the opening up of North Korea to the Gospel.

“The world is about to see a major change,” said Kim Jong-Un at the Summit in Singapore. Let’s hope the North Korean leader keeps his word and there is radical change for good – that not only delivers denuclearisation, but an end to human rights abuse, especially against Christians.

“And this Gospel of the Kingdom will be preached in the whole world as a testimony to all nations,”  Matthew 24:14 declares.

Nothing can stand in the way of this being accomplished, no brutal regime or political dynasty or false gods. And, God can even use an imperfect American president to start the ball rolling!

Certainly, in this historic summit that many thought would never happen, President Trump has achieved what no other US president has done, met with the leader of North Korea, an enemy of the USA since the Korean War of 1950-53.

However, CBN observes that he has followed in the footsteps of Ronald Reagan. “On June 12, 1987 at the Brandenburg Gate, President Reagan told Mikhail Gorbachev: ‘If you seek peace, if you seek prosperity… if you seek liberalization… tear down this wall!’ Today, exactly 31 years later, President Trump picks up the baton!”

Trump-Kim Summit: history in the making

“History is made in Singapore with a handshake that signifies a promise to build lasting peace on the Korean Peninsula and a new relationship between the USA and North Korea,” the BBC reports.

CNN is less positive, minimising what has been accomplished and pointing out all the limitations… questioning whether the agreement to denuclearise is verifiable or irreversible and observing that no time table has been set.

However the two leaders did sign a four point plan that aims to see the process of denuclearisation soon begin:

We need to continue to pray

“Thank you for praying. It seems the Trump-Kim Summit went very well,” says Franklin Graham. “This is just the beginning of a new chapter between NK and the USA. My continued prayer is that God will give wisdom to both leaders. I’m thankful we have a President  who was willing to take the risk.”

While OpenDoors, a ministry that stands up for the Persecuted Church is positive, they remain cautious, quoting North Korean defector, Hea Woo: “We should be careful not to be deceived… I know how horrible the Kim leaders are… But it is possible that God transforms people through His power. Let’s pray that if North Korea has any dark plans, that they will be revealed.”

During a press conference, President Trump said he had addressed human rights violations with Kim Yun-Un. He also spoke of Otto Warmbier, the American student who was returned to the US by North Korea in a coma and died from brain-damage.

“Without Otto Warmbier this summit would not have happened. He did not die in vain, let his parents know peace will come in his name,” said the President.

He also spoke about ending the USA’s ‘war games’ against North Korea and how he hoped for the day when the USA could recall its 32,000 soldiers stationed in South Korea. In due course international observers will visit North Korea. In the meantime sanctions remain in place.

“The Korean War never ended to this day, but now we can all have hope that it will end soon, and it will,” President Trump said. “The past does not have to define the future. A bright future is within reach if North Korea gives up nuclear weapons.”