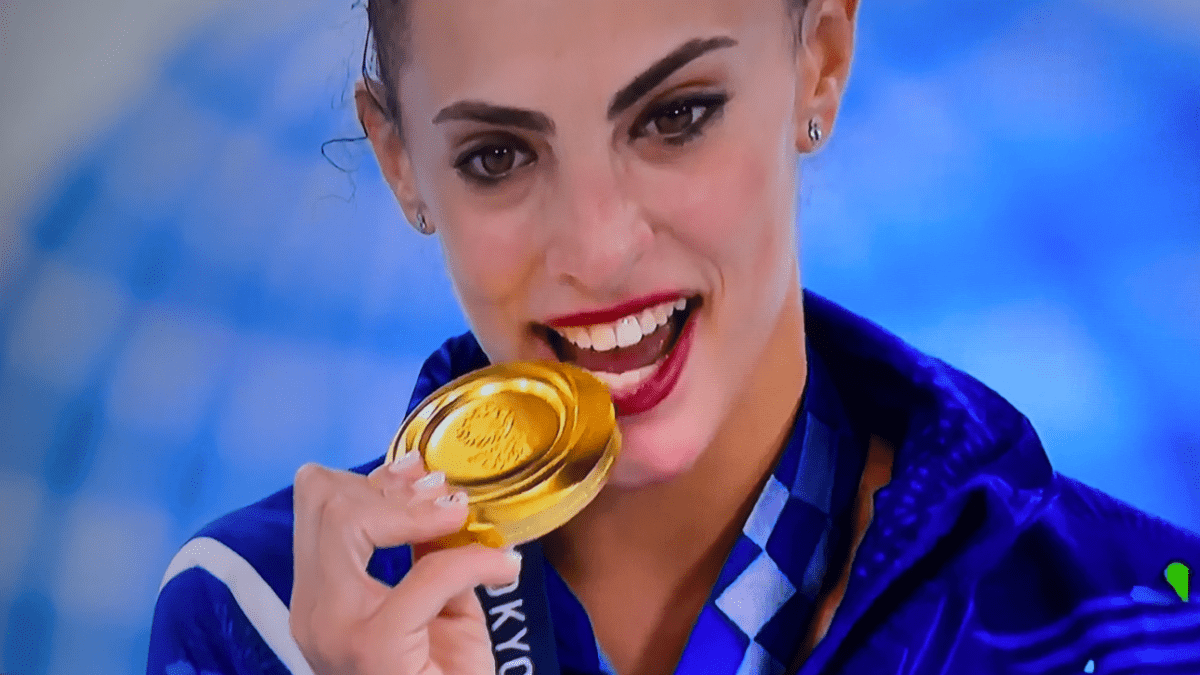 Linoy Ashram became the first Israeli woman to win an Olympic gold medal thanks to her near-perfect performance in the women’s individual rhythmic gymnastics final Saturday. While Ashram smiled through happy tears as Hatikvah, Israel’s national anthem, played during her time at the top of the podium, the Russians—especially silver-medalist Dina Averina—visibly sulked and cried foul.

Averina and her twin sister were the favorites for the event heading into the games. However, Ashram managed to edge out both Russians, despite dropping her ribbon once during her routine. Ashram’s gold medal performance marked the end of decades-long domination in the sport by the Russians.

“This is history. I’m proud of represent Israel here, on the biggest stage in the world,” the 22-year-old Ashram said after her win. “It’s like a dream, I think it’s like I’m not here.”

While Ashram received praise from her teammates and a flood of congratulatory posts on her Instagram and Facebook pages, she also faced a wave of criticism and fury from many Russians for beating Averina, their three-time Olympic champion. “The thief in all her glory (referring to a photo of Ashram wrapped in the Israeli flag) “… “shame on Linoy Ashram and her stealing the medal.” You’d almost forget that Russia is banned from Olympic competition for cheating. (The ROC was created as a workaround.)

Posts went back and forth—between praise and panning Ashram. One special congratulation came from the legendary gymnast from Romania, Nadia Comaneci—the first to ever score a perfect 10. “Linoy Ashram, congratulations. You made history.”

Russian lawyers have filed for an official inquiry into the scoring with the International Gymnastics Federation.

Later, Averina did tell the online community to stop harassing her fellow gymnast, saying the scores are up to the judges. “She didn’t do anything wrong. Stop poisoning her.” Good for her!

Ashram returned to Israel on Wednesday and received a “hero’s welcome” at Ben Gurion International Airport. Hundreds of adoring fans, school children (perhaps future Olympic hopefuls!), friends, and family members were there to greet her and celebrate her achievement.

“I have no words. This is one of the craziest experiences I have had in my life. I will not forget this reception my whole life. Thank you all for your love and warmth. I am delighted to finally be back in Israel. You are the best crowd of people anyone could ask for,” Ashram, with her gold medal around her neck, told the enthusiastic crowd.

If Ashram’s win sent the Russian gymnastic dynasty tumbling, it was completely knocked over when the Bulgarian rhythmic team took home the gold for their spectacular group performance. While the Russians literally wept, the Bulgarians rejoiced at their unexpected victory.

“It’s so unreal, we cannot believe it. I don’t know what to say. This is the happiest moment, ever,” said Stefani Kiryakova, one of the Bulgarian gymnasts.

If you haven’t ever watched rhythmic gymnastics, it has all the tumbling, jumping, and twirling elements of regular gymnastics, but they throw in shiny costumes that sometimes light up, plus balance or toss ribbons, balls, and other objects high into the air and (hopefully) catch them with precision timing. The group competition is a lot like synchronized swimming but on dry land.

I don’t think I have watched it since I was a kid, but Elana and I made sure to support Linoy as she went for gold! 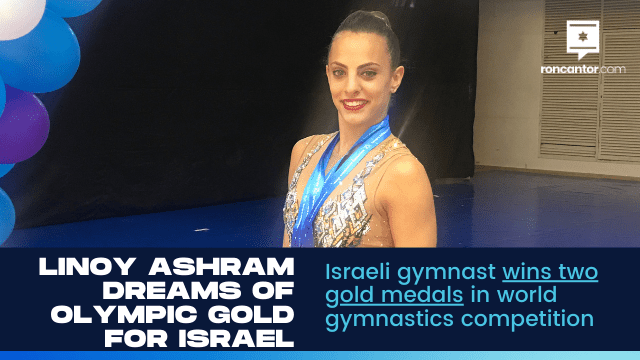 Linoy Ashram, one of Israel’s best hopes for a medal in the upcoming Summer Olympics, won two gold medals and one bronze this past weekend at the Rhythmic Gymnastics World Cup in Bulgaria.

On Saturday, with an impressive score of 98.45, Ashram took home the all-around gold for Israel by winning multiple separate events including routines with a hoop, ball, clubs, and ribbon. She followed that victory with another gold on Sunday in the ball event with a 26.5 score. Ashram also placed third in the hoop event, with a score of 26.1, earning a bronze medal.

A statement by Israel’s Gymnastics Federation praised Linoy for her outstanding performance in her first international competition of the season. “Linoy presented new exercises with high levels of difficulty, and we are proud of her for achieving such an excellent score, which is undoubtedly the result of the hard work put in by Linoy and her trainer, Ayelet Zussman.”

Ashram’s two trips to the top of the podium in world competition are the fruit of many years of sacrifice and second place finishes. In the 2019 World Championship in Azerbaijan, she managed to win a silver medal in the hoop event and a bronze in the ball competition. And in 2020, Ashram gained the attention of the world gymnastics community when she became the first Israeli European all-around champion, winning gold at the European Championships in Ukraine. 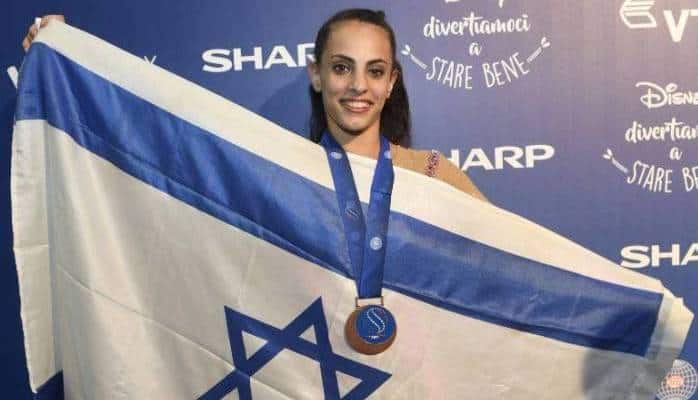 Linoy Ashram Went Silver As She Heads Toward Tokyo Olympics

Linoy Ashram, a 19-year-old Israeli athlete, won a silver medal in the hoop exercise at the Rhythmic Gymnastics World Championships in Sofia, Bulgaria on Tuesday.

This is the first time that an Israeli gymnast has achieved a silver in this category during a world championship.

This is the first time that Israel has sent two gymnasts to the World Rhythmic Gymnastics Championships. Ashram’s teammate, 17-year-old Nicol Zelikman, made it to the fifth place during the hoop exercise with 19.5 points.

Zelikman also progressed into the final for the ball exercises, an exercise in which Ashram failed in the early stage.

Despite her weak performance for the ball event, Ashram declared her aim was to win a medal at the all-around competition, which includes hoops, ball, clubs and ribbon exercises and is also the only gymnastics field at the Tokyo Olympics.

Shortly after the conclusion of the competition Prime Minister Benjamin Netanyahu took to Twitter to congratulate Ashram, writing that her performance was an “Awesome achievement.”

In August, Ashram broke a world record at the Gymnastics World Cup with a score of 20.65. Last year, the rhythmic gymnast also won a bronze medal during the all-around competition during at World Championship in Italy.