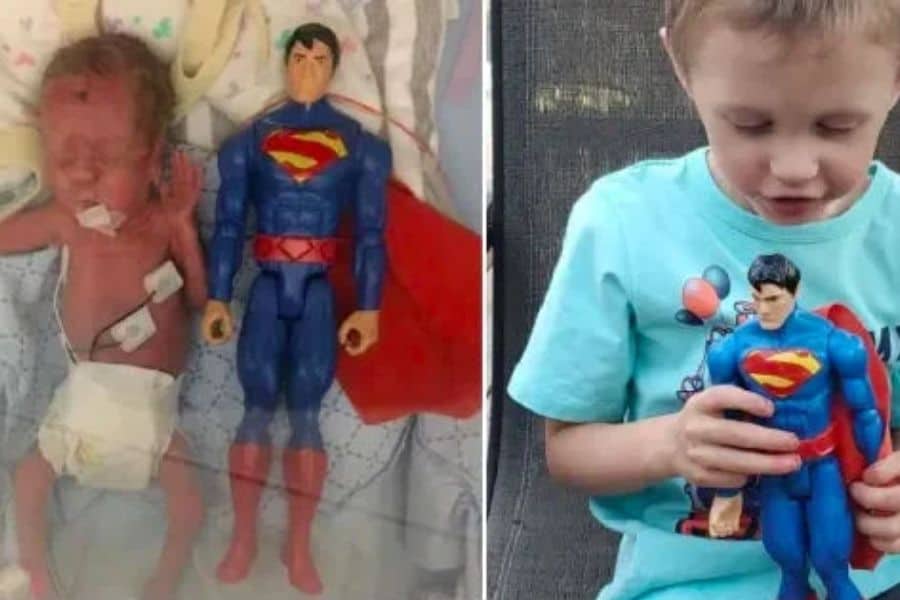 Valeria Ray was 21-weeks pregnant when she felt that something wasn’t right. She rushed to her doctor who discovered she had an incompetent cervix. This type of condition puts the baby at risk of a miscarriage as the cervix opens and shortens before the baby is full term.

“The doctors basically told Rob and I that they were gonna send us home to miscarry,” Valeria recalled. “Rob and I both looked at the doctor and said ‘we are not going anywhere, whether we have him tomorrow or four months from now, we are staying at the hospital.”

She was then put on bed rest where she wasn’t allowed to get up at all. However, after 20 days, Logan was born prematurely. After 32 hours of labor, he was quickly rushed to the NICU.

He was just 23-weeks old and he was so tiny. They took picture next to the superman toy he received as his first gift. Logan was just 1.5 lbs and 12 inches long.

“We had nurses suggest putting something next to him to compare size-wise. I didn’t want to leave the hospital so I had Rob go out instead. ‘I told him to pick out something that he thought would be appropriate like a doll that we could disinfect and put inside the incubator. ‘He called me and said what about Superman? I thought it was perfect!”

The newborn suffered two brain bleeds, two holes in his heart, a hernia, and a urinary tract infection. Despite all the hurdles he had to face on his first day, he bravely fought through it all. After a few days, he was flown to a hospital in Oregon for dialysis treatment.

After 105 days in the hospital, little Logan was able to experience a miracle! He was well enough to be released from the hospital and go home for Christmas. It was truly a miracle and the best Christmas gift the family ever received.

Every year, on Logan’s birthday, he still gets a picture with the Superman toy. He is now 4-years-old and doing well.

“He’s just an incredible little boy,” Logan’s dad Rob said. “A lot of these babies born at 23 weeks have tons of health problems but Logan just didn’t, thank God. He’s a smart little kid, my little boy, he really is.”