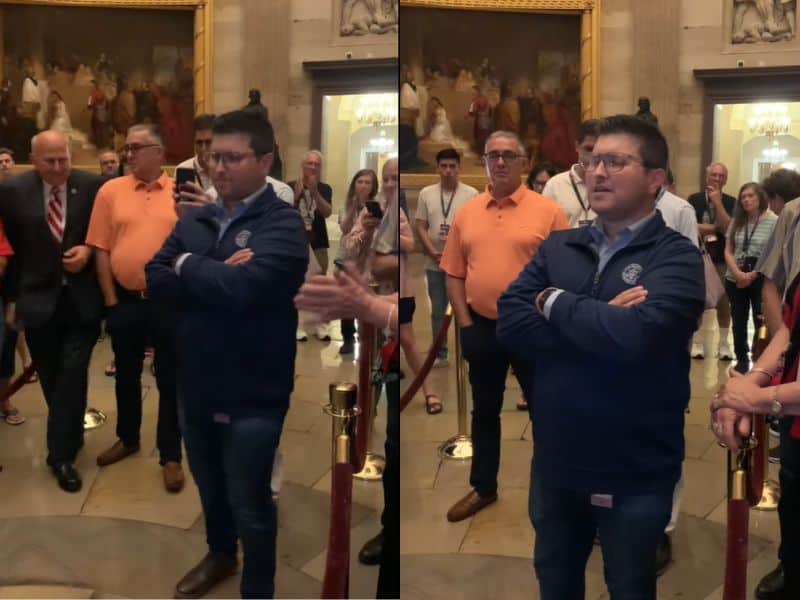 A video showing a man singing his rendition of the “Lord’s Prayer” at the DC Capitol went viral. A few days after posting, it immediately received millions of views and blessed the hearts of its million viewers.

Nathan Kistler has been around the world, sharing his talent to sing about the Gospel of Jesus. He had shared stages with other anointed Christian artists and even went in front of the X Factor studio in LA. But, it was his first time singing at the rotunda of the DC Capitol.

He said in his Facebook post, “In the last almost 13 years that I’ve been here, I’ve never sung in the rotunda of the Capitol. I’ve always set it up for other singers to do so. Rep. Louie Gohmert asked if I would sing for him and the group, and I was honored to do so.”

Fortunately, his father, Dave Kistler, was able to grab his phone and record the powerful moment.

The two-minute video showed Nathan singing the Lord’s Prayer, declaring its message in the heart of America. Passersby could not help but stop in their tracks to check out the marvelous moment. Others were listening intently as if embracing each second.

Hope to the Hill

But, Nathan’s singing is part of their service in Hope to the Hill. Their ministry connects them to politicians as they build wonderful relationships that lead to opportunities to share the Gospel.

Hope to the Hill provides pastoral care, prayers, and encouragement to members of Congress. Nathan told CBN News, “So many members when you go into their office, say, ‘Well, what can I do for you today?’ And we just say we don’t want anything from you. We just want to know how we can pray for you. And it’s amazing to see members – I’ve had anything from they kind of shrug a little bit to crying because they’ve never had anybody come into their office and ask how they can pray for them.” 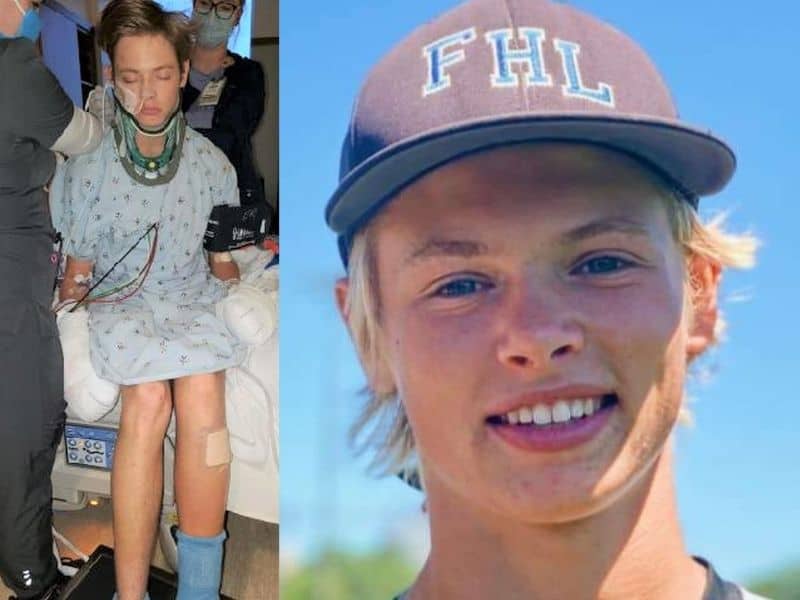 Rescuers were astonished to find an unconscious teen in a terrible condition after being involved in a near-fatal car crash praying to God.

On November 28 of last year, 19-year-old Broden Frolek was been involved in a near-fatal car crash. The terrible accident left him with multiple fractures and brain injuries that placed him in a coma for 11 days.

According to the report from the North Dakota Patrol, the accident happened at about 8:35 PM. The North Dakota State University student was driving his 1997 Pontiac Grand Prix westbound on Highway 11 when his vehicle veered off the road and entered the north ditch.

“The vehicle struck an approach and began to roll. The Pontiac came to rest in a slough on its top. The driver was located several hours after the crash, around 11:55 PM,” the report said. 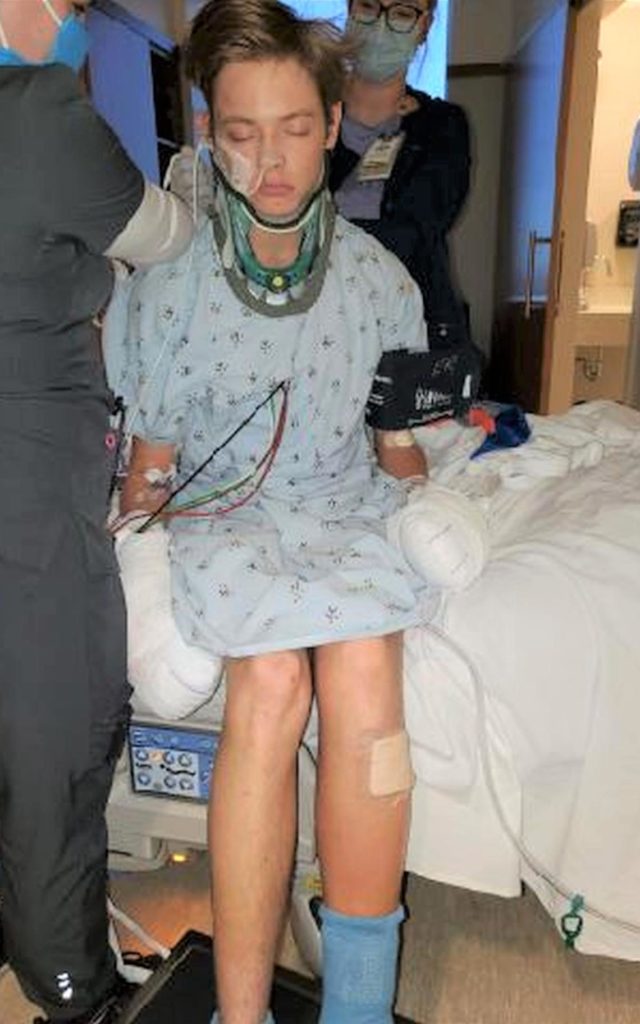 Broden’s housemates Mason Falk and nursing student Devan Round came to look for him upon learning that he had been missing.

“Broden was north of the car about 10, 15 feet in a little spot, about 5 by 5 feet, on top of the ice, surrounded by the cattails,” Mason recalled. “It was the only bare spot all around.

Devan called 911 while checking Broden’s injuries, that was when he heard the unconscious teen uttering a prayer. Mason took some time to realize what his cousin was doing. Upon realizing that he was praying, he knelt down and prayed with him.

“He wasn’t conscious, but he was speaking. It sounded to me like Latin,” Mason said. “He was praying the ‘Our Father,’ just little bits. So I knelt down and started praying with him,” Falk recalled. 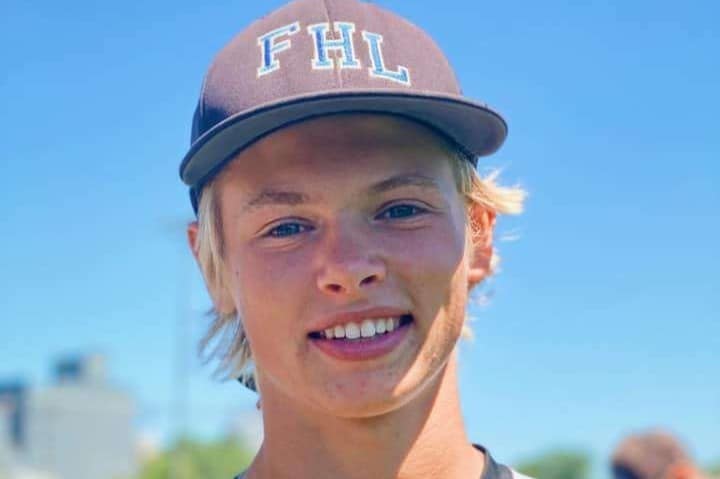 The teen’s family knew that God was with him throughout the ordeal and that He had protected Broden’s life. After a month in the hospital, the university student was able to return home and continue his recovery.

“I know by faith he was not there alone,” Broden’s mom, Tonia Frolek, tearfully said. “The fact that he was lying in the only dry area is a miracle in itself.”

The North Dakota teen has grown his faith since the day of his accident.

Before the accident, I was sometimes rude to my siblings. I was going to mass on Sundays, but it wasn’t enough,” Broden said in an interview. “Now, I pray four or five times a day, and for other people too.”

Broden doesn’t recall praying on the site of the accident, however, he knew why he was able to pray while unconscious. It was because his parents taught him since childhood that “when you’re in trouble, pray, and God will keep you safe and healthy.’”

Read also: Boy With Mysterious Disease Miraculously Healed After Doctors Told His Parents He Would Die 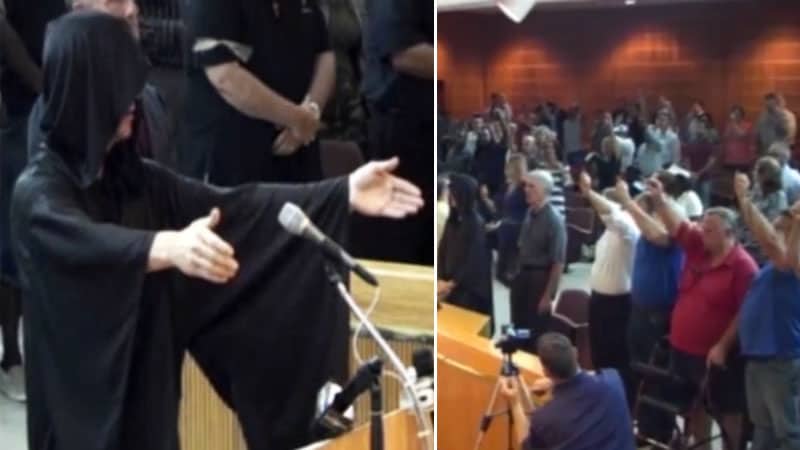 Satanist David Suhor, (48) was given the opportunity to say an opening prayer at a Pensacola City Council meeting in Florida. A member of the West Florida Chapter of the Satanic Temple, he arrived wearing a black hooded robe.

Dozens of Christians attending the council meeting were concerned the Satanist would invoke curses upon the city and as he moved forward to begin, they started praying loudly in the Name of Jesus. Many started saying the Lord’s Prayer…

Our Father who art in Heaven, hallowed be Thy name. Thy Kingdom come. Thy will be done, on earth as it is in Heaven. Give us this day our daily bread, and forgive us our trespasses, as we forgive those who trespass against us; and lead us not into temptation, but deliver us from evil. For Thine is the Kingdom, the power and the glory, forever and ever, Amen. 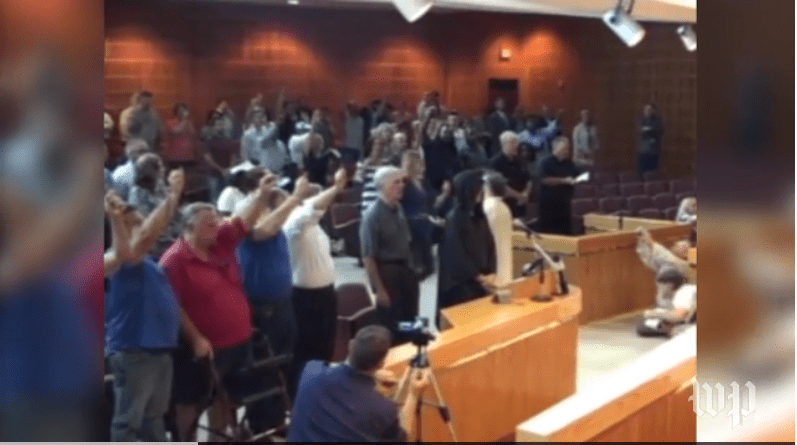 Taking a stand for what is right

The City Council President, Charles Bare, had to clear some protestors from the room before the Satanist could start, however many believers were able to stay, holding crosses and Bibles in their hands and whispering prayers during the entire Satanic ritual. They refused to compromise their stand for God and are to be commended for their boldness.

David Suhor eventually sang out his message inviting those gathered to “embrace the Luciferian impulse to eat of the tree of knowledge” and ended by shouting ‘Hail Satan.”

Satan is ever ready to lead people to impurity, to rebellion against authority and to disobedience to God’s commandments but he cannot defeat those people who make God their King.

One person with God is always a majority. “For where two or three gather in My name, there am I with them.” (Mathew 18:20)

It is commendable to hear abut Christians praying together in unity, coming together to take a stand for what they believe and to resist every demonic practice. We know we do not fight a physical battle, but one in the Heavenly realm. (Ephesians 6:12) Let us therefore continue to put on the armor of God, and having done all to stand.