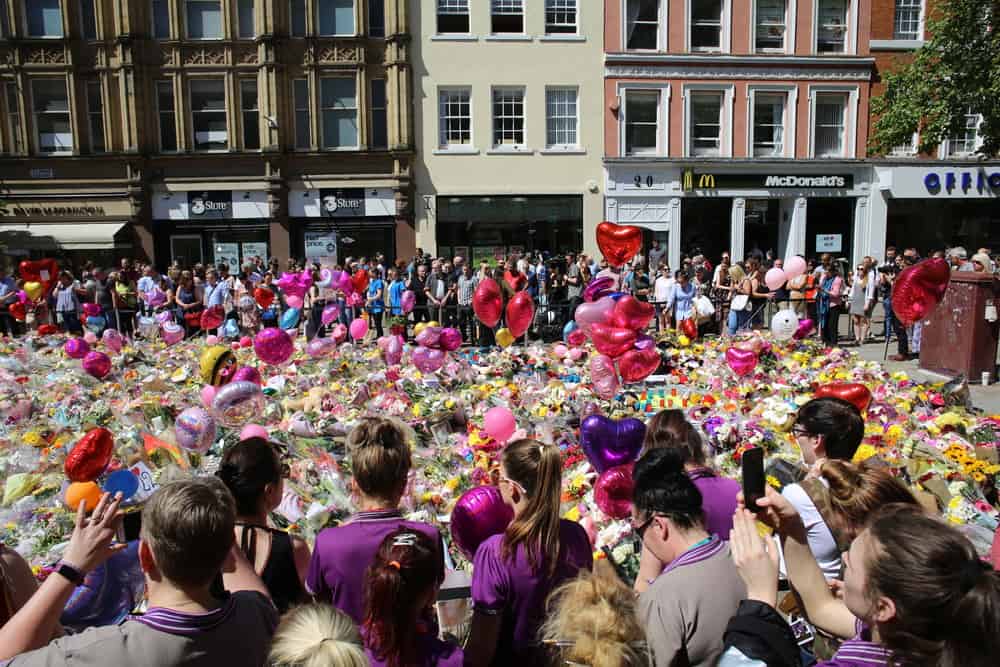 The UK Saved His Life, Yet He is Responsible for the Deaths of 22 British Citizens

The UK media have revealed that the Manchester suicide bomber, Salman Abedi was rescued by the Royal Navy from Libya in 2014 where civil war ended the lives of thousands of people. You’d think he would have been grateful for the gift of life and more inclined to be protective over the lives of others – but instead three years later he detonated a home-made bomb at an Ariana Grande concert, killing 22 people and wounding more than 200.

The picture shows a huge floral tribute to the victims of the Manchester bombing as people came to pay tribute to the 22 people killed and many injured. (Manchester, UK. May 26, 2017.)

This was an appalling act of terror which affected many families throughout Manchester especially as so many children were victims. It wasn’t the first time the city had been bombed, having survived the Blitz of World War 11 and IRA bombings in 1974, 1975, 1992 and 1996. But this was the first time the city was targeted by an enemy within. Salman Abedi was a British Citizen, born to Libyan parents in Manchester in 1994 after his parents had fled the Gaddafi regime.

Abed and his brother, Hashem returned to Libya as young men but both were warned to leave Libya during the Civil War along with all British nationals due to the extreme level of violence in the country. Together with about 100 other British citizens they were evacuated from Tripoli by HMS Enterprise as the security situation in Libya deteriorated.

Salman became radicalised by Islamic militants fighting for IS in Syria and Iraq and blew himself up in the foyer of of the Manchester Arena on 22 May 2017 as concert-goers, many of them children, were leaving the venue. His brother, Hashem Abedi is currently in jail in Libya but the British government has requested his extradition to face trial for his involvement in the Manchester attack.

It’s hard to imagine that those who have sought refuge in the UK, who have been rescued by military personnel risking their lives, could turn their backs in such a way and repay kindness with such devastation. This is a contemporary reminder of the Parable of the Unmerciful Servant recorded in Matthew 18:21-35.

“You wicked servant,” the Master said, “I canceled all that debt of yours … Shouldn’t you have had mercy on your fellow servant just as I had on you?” (paraphrased)

A Sickening Act of Betrayal

Salman Abedi was unmerciful, though he sought to serve a God he thought of as “all merciful”.

As believers we read in the same passage that we need to forgive even the most heinous of crimes committed against us. This act of forgiveness will bring healing and closure to all affected by what The Daily Mail has called ‘A Sickening Act of Betrayal’.

Though it may seem impossible to forgive this man, we must remember what God has saved us from and be a merciful servant, leaving judgement to the Lord who is the Righteous Judge.

However, Mark 9:42 does tell us the consequence of hurting innocent children…“If anyone causes one of these little ones–those who believe in me–to stumble, it would be better for them if a large millstone were hung around their neck and they were thrown into the sea.”

These are the words of Jesus and show His love and compassion for God’s children. Our hearts continue to go out to all who lost loved ones in Manchester and we pray against this kind of radicalisation in the UK and other countries subject to the return of IS fighters. May God protect us from further acts of terror and keep our children safe.