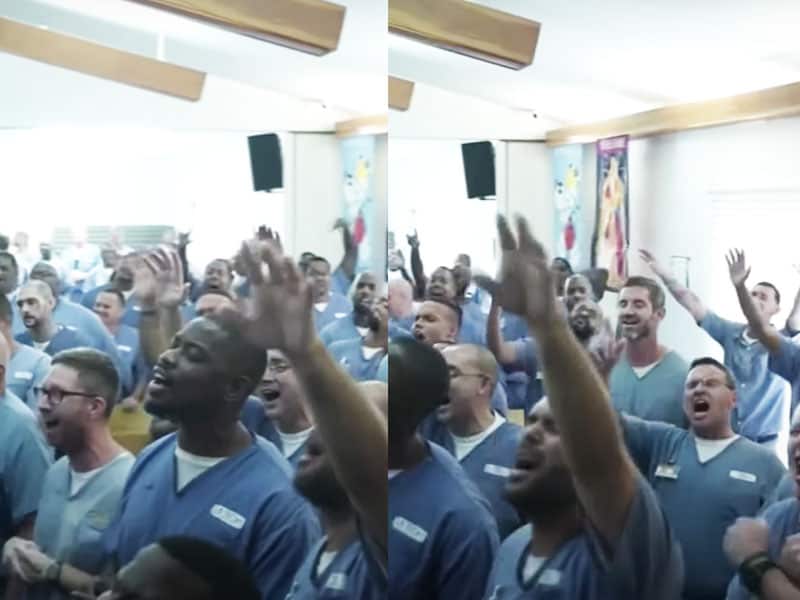 Powerful worship broke out at Florida State Maximum Security Prison when the inmates sang at the top of their lungs with the worship song “How He Loves Us.”

People found guilty of crimes are imprisoned at maximum-security prison cells. Often, they are perceived as dangerous people that one should avoid nor befriend. But to those who love God, showing the unconditional love of Christ to these people is the mission. And that’s what the worship team Maverick City Music did exactly that. 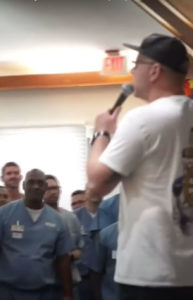 On Instagram, God Behind Bars, a Christian organization aiming to minister to prisoners, posted a powerful moment at the maximum prison in Florida. The video showed hundreds of inmates worshiping God passionately. According to God Behind Bars, 260 inmates were worshiping so loud “that the other 1600 men who don’t come to church could hear the words, ‘God loves them.’” Moreover, “hundreds have gotten saved at this prison.”

Maverick City Music led the inmates to praise and worship with the song “How He Loves Us.” It became an emotional moment when they responded and genuinely worshiped God at the top of their lungs. The men boldly declared God’s unconditional love for them through singing. 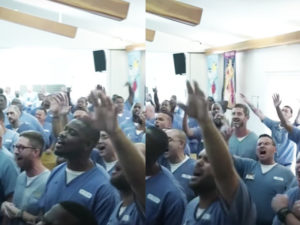 “Each was in his element, passionately worshipping Him. With their hands raised, everyone felt the depth of His love for them,” wrote Faithpot.

After God Behind Bars shared the video, it went viral and created a buzz online. Now, it has more than 170,000 hearts and over 4,000 comments. Many Instagram users admitted how the video moved them to tears.

User cf_baller713 also wrote, “Nothing more beautiful than seeing that kind of work from God Hallelujah.”

Indeed, God had liberated these inmates when they genuinely welcomed Jesus in their hearts! 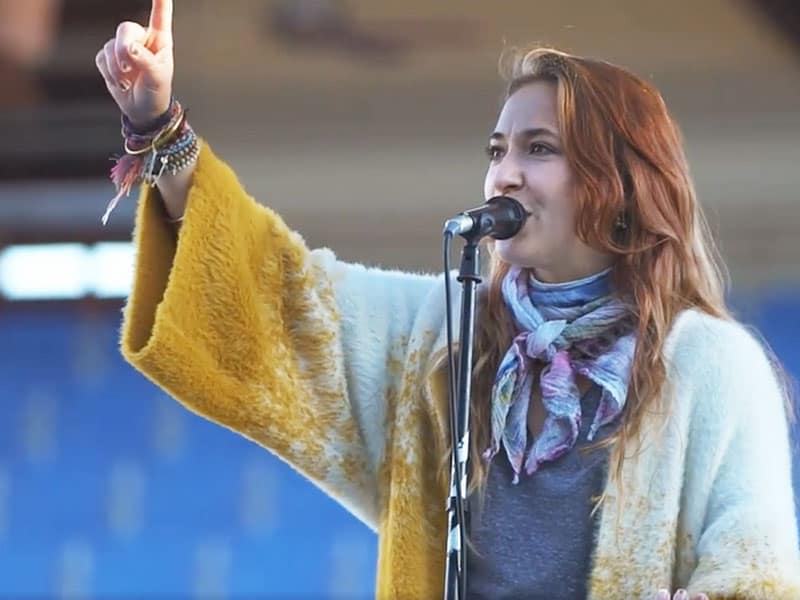 Once again, Lauren Daigle visited a maximum-prison bringing the Gospel of Hope to inmates. The singer visited Angola, Louisiana State Penitentiary to share the love of God and to raise funds for the care of inmates. 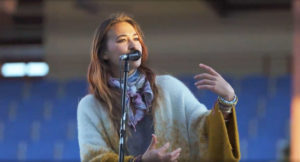 In the video, Lauren compassionately spoke to all the prisoners and said, “I appreciate and I love all of you guys. I know that I don’t know you but maybe someday I get to cross paths with you. And if not here then on the other side. In heaven we’ll be able to give each other a big whole hug. Honestly, I care so much about each one of your stories..”

Lauren Daigle Raises $17,000 For The Prisoners of Angola

On Giving Tuesday, Lauren’s team decided to raise funds and partner with Angola. Because of this, they were able to raise $17,000. The funds help provide clothing and phone calls for the prisoners. Phone calls mean the prisoners can make more calls to family and loved ones this Christmas. 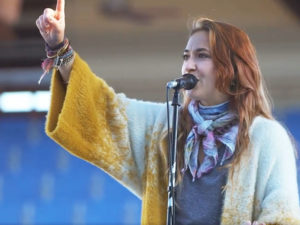 While Lauren brought fun and music to the inmates, her true mission was to bring them Jesus. She boldly shared God’s love with them.

The Message In A Song

Lauren then sang her song “How Can It Be” for them. The song describes God’s unchanging love for everyone despite the failures and mishaps a person has committed in his/her life.

And one man in a wheelchair, who was among the audience was see overcome with emotion. 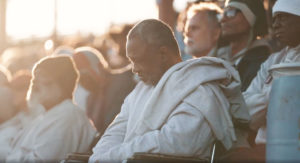 Indeed, Jesus’ death and resurrection offers them a NEW life. Regardless of what they may have done, God always extends His forgiveness to those who ask. Thankfully, Lauren used her platform to share God’s unconditional love and redemptive power to those society has condemned. No one is too far gone from God! Truly He was there with Lauren that day, extending His free and perfect Grace. To God be the glory! 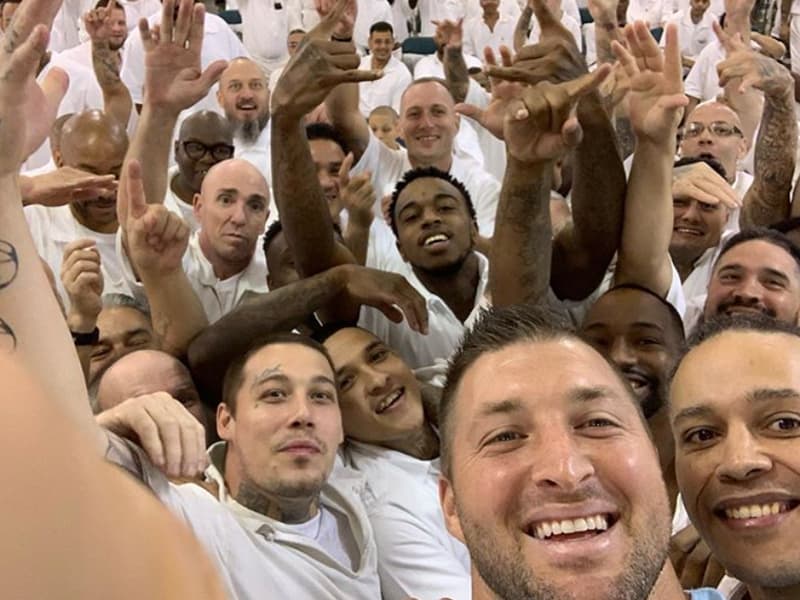 Former NFL player Tim Tebow visits a prison to share the hope of Jesus with inmates at a maximum-security prison.

Tim surprised everyone when he visited a maximum-security prison after speaking at a pro-life event in Waco, Texas. He took to Instagram to share his joy from the experience with the inmates he now calls “brothers”.

“So grateful to spend time with my new brothers in Christ at Alfred Hughes Prison and encouraging them in the hope that Jesus brings,” Tim wrote.

So grateful to spend time with my new brothers in Christ at Alfred Hughes Prison and encouraging them in the hope that Jesus brings!

Sharing The Gospel With Inmates

Alfred D. Hughes Unit in Gatesville, Texas is a maximum-security prison that has over 2,000 inmates. The ESPN football analyst met with a group of inmates at the prison to share the Gospel of Jesus Christ. He also fellowshipped with them and even joined in a push-up competition in which he lost 84-71.

“Honestly it’s one of my favorite things to do on this earth,” Tim said. “I know it sounds weird, going to prison, but man I just feel like it’s something God put on my heart a long time ago and He said, ‘Hey, most of the world forgot about them, but you don’t forget.’ So I try not to forget. I try to get with them and share the hope that we have in our faith, to share encouragement … how they matter to me but more importantly how they matter to God.”

We had fun, but I got smoked! So encouraged by what God is doing at Alfred Hughes prison and grateful for the time spent with my new brothers in Christ today! Excited to see how they will use their lives for the Kingdom as the grow closer to God and encourage others to live in faith! Thank you to the Warden and the entire staff- thank you for opening your doors and letting us love on your boys today!

The visit happened on October 3 when Tim spent five hours with the inmates. He even spent some time one-on-one talking with those that are not allowed to be in a group setting.

“Excited to see how they will use their lives for the Kingdom as they grow closer to God and encourage others to live in faith.”

Read also: Tim Tebow Crowns People With Special Needs As Prom Kings And Queens During A Night To Shine