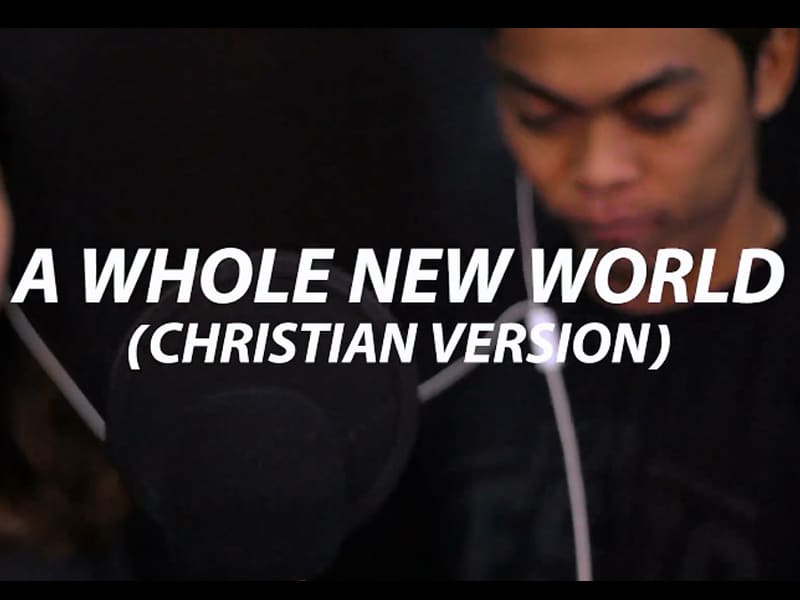 If you’ve fallen in love with the movie ‘Aladdin,’ you will fall more deeply in love with God through a Christian version of the song ‘A Whole New World’ which shares what God’s love looks like.

‘Aladdin’ recently hit the box office with gross takings of $450 million worldwide! Walt Disney’s musical fantasy directed by Guy Ritchie that premiered two weeks ago is a runaway success.  And as the movie succeeds, so does its official soundtrack ‘A Whole New World!’

This current ‘Aladdin’ release recreates the 1992 Lea Salonga and Brad Kane song that was such a global hit.  The new version, uploaded by Disney Music on YouTube now has over 5.5 million views in just three weeks! Listen to the viral new version below sung by Mena Massoud and Naomi Scott who is a Christian.

On Saturday, a Christian version of the viral song was uploaded to YouTube and it has also provided highly popular! Kimmy Naïve and Mikee Muyco are Gospel music artists from the Philippines and their version of the song will encourage you in your walk with Jesus!

A Whole New World (Christian Version) He Made You New

He Made You New

God loves you so much / He gave His life for salvation / He will take you from darkness to light / and give you a brand new life / He can do anything / full of mercy and power / He is with you / And He will never let you go, my friend.

He made you new / He is worthy to pursue / He forgave your sin / He made you clean / Even when you’re a sinner.

He made you new / He’s the beginning and the end / His love will never change / Nothing compares / You’re with God the One who loves you most.

Unbelievable God  / His love for you is forever / God Almighty, Redeemer / He will bring to the Promised Land /
He made you new (the old has gone; new is here) / He is worthy to be praised (Hold your faith to the Savior) / Before you were clothed by sin / now you are clean / You are worthy / now you’re free again

He made you new (you’re the light of the world) / He gave you a vision to pursue (use your life for the better) / When you go anywhere /  His love is there! / Let me say these words / “You are so blessed”