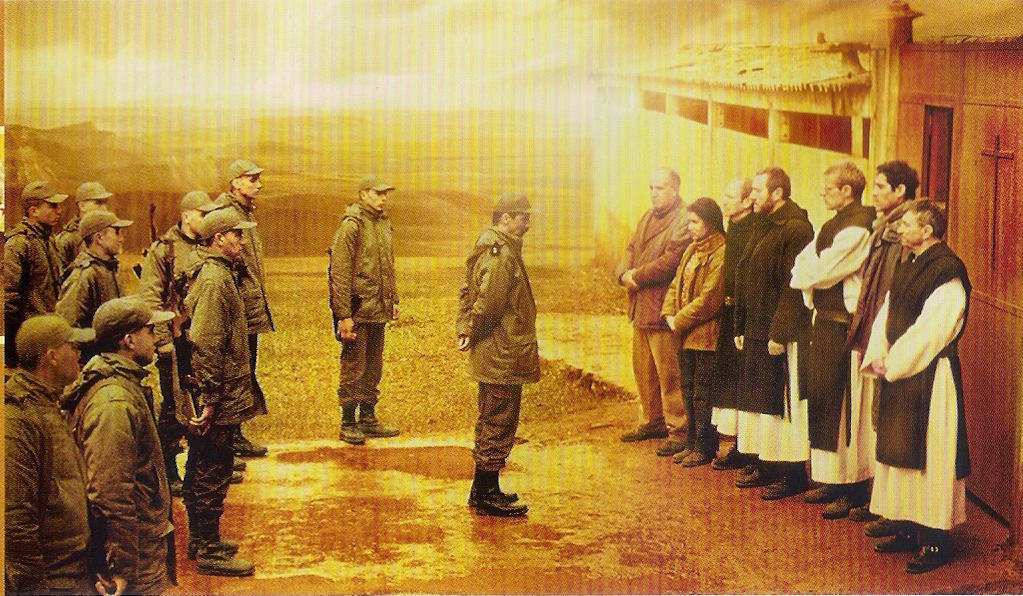 Of Gods and Men has been described as “the most brilliant film you will ever see about a bunch of monks sitting around discussing whether or not they should leave their monastery”. Although reductive this is a good summary, and the film is very brilliant indeed.

This is based on a true story, about French monks in Algeria circa the mid-1990s, who endangered themselves by refusing to leave when threatened by fundamentalist Islamic militia. They also refused protection from government troops, insisting they should not take sides because they were respected and trusted in their local community (where they provided medical help, amongst other things).

Every cast member is superb, with each of the monks brilliantly characterised with winning subtlety. Their leader Christian (Lambert Wilson) is brave, idealistic and uncompromising; a profoundly humane man who condemns the brutal reprisals of the military as much as the atrocities of the terrorists.

Monastery doctor Luc (the excellent Michael Lonsdale aka the baddie from Moonraker) is in ailing health, but nevertheless continues to treat every patient, regardless of their allegiance in the civil conflict. Wise, fearless and possessed of a quiet wit, he often gives advice to local villagers, most amusingly in one scene on the subject of love.

Amongst the other monks there are crises of faith which are gently and sensitively handled, and their extraordinary courage is portrayed so convincingly that one simply forgets they are actors in a film. The quiet, contemplative atmosphere contributes to this sense of realism, along with the understated melancholy beauty in the landscapes. Director Xavier Beauvois allows many of his shots linger long after other directors would have yelled cut, but by opting for slow, deliberate pacing, the audience is able to appreciate the silence, and how in that silence the monks come to hear the voice of God. One scene where Christian walks and prays in the countryside resonates particularly powerfully in this regard.

Other stand-out scenes include an extraordinary moment when a military helicopter descends towards the monastery, disturbing the prayers of the monks. They stand, and sing together, and eventually the helicopter leaves. It is an extraordinary picture of the spiritual warfare described in Ephesians 6 verse 12.

Another scene late in the film – a wordless sequence where the monks share a glass of wine and a last supper together as they listen to a tape recording of Swan Lake – is so astonishingly moving that words simply cannot do it justice.

Speaking of music, hymns and choral chants provide a beautiful and appropriate score throughout, with the lyrics often commenting on the plot. Biblical passages are used to pertinent effect, but at one point Christian even quotes the Qur’an during a tense encounter with Islamic fundamentalists in order to diffuse a situation.

Some might interpret the film as a plea for religious co-existence, and to a degree that is true. At no point are the monks seen attempting to convert any of the villagers, and the film takes pains to emphasise what Christianity and Islam have in common, despite the fact that there are supremely important differences. But this film is, above all, a story that proves what Jesus said in Matthew 5 verse 13 about Christians being the salt of the Earth, preserving order and peace whilst they are present. One key scene shows the monks telling the villagers they might leave, and that they are like birds on branches. The villagers respond by saying the monks are the branch and they are the birds. Without them, they will have nothing to stand on.

All told, Of Gods and Men is an intelligent, brilliantly told, profoundly moving story of bravery and faith.