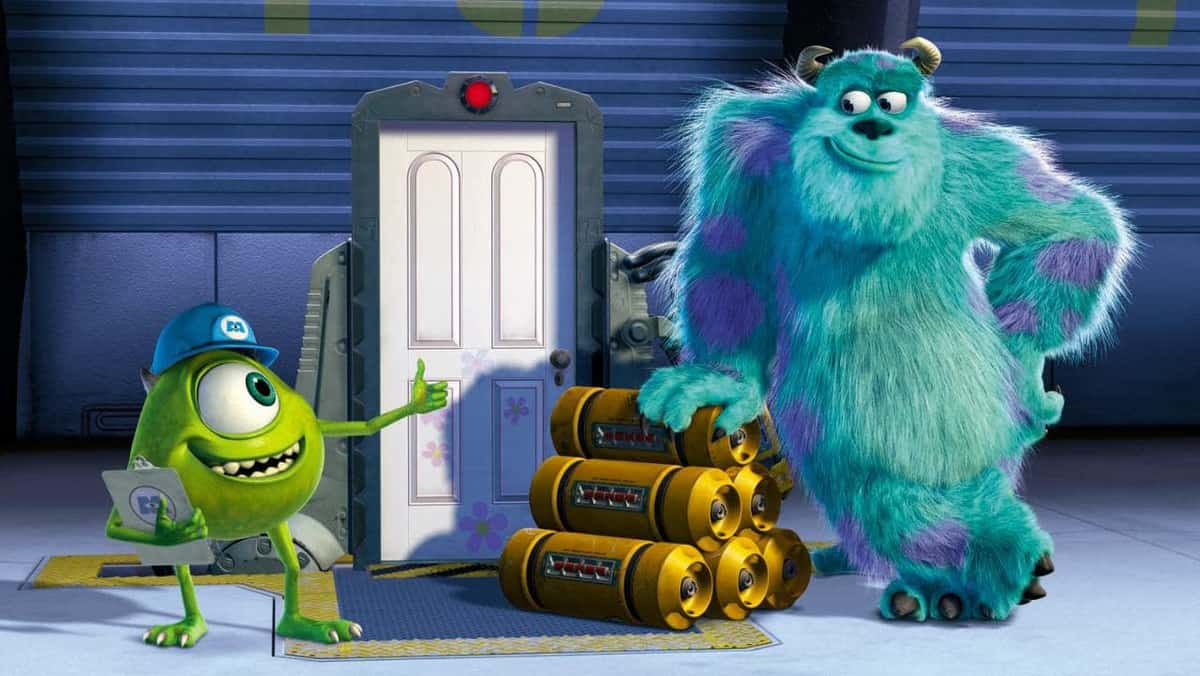 In a parallel universe, monsters open portals to closets in children’s bedrooms, because they need the screams of the children they terrify at night in order to power their world. That’s the ingenious premise of Monsters Inc, one of Pixar’s finest movies from their golden era (essentially an unbroken series of masterpieces between 1995’s Toy Story and 2010’s Toy Story 3).

When crack monster scare duo Mike Wazowski and James P Sullivan discover a little girl who has accidentally crossed into the monster world, at first they panic. Monsters believe human children are toxic. However, once they discover this belief is nonsensical, Mike and Sullivan try to come up with a plan to secretly return said girl to her world. Sullivan names the girl Boo, much to Mike’s chagrin (“You’re not supposed to name it. Once you name it you get attached to it!”). Unfortunately evil monster Randall has a nefarious plan involving Boo, and the plot thickens.

Outstanding vocal performances from the likes of John Goodman, Billy Crystal, Steve Buscemi and James Coburn really bring the colourful characters to life. It goes without saying that the animation (under the supervision of Pixar directorial gurus Pete Docter, Lee Unkrich and David Silverman) is superb. Furthermore, the screenplay has gags and wit to spare, along with some amusing in-jokes (the monsters eat at a prestigious restaurant aptly named Harryhausen’s).

An embarrassment of favourite scenes includes the hilarious interventions of the radiation outfit clad Child Detection Agency (“23 19!”), the downright creepy administrator slug Roz (“I’m watching you Wazowski… Always watching…”) and Mike’s hysterically inept escape plans (“Using mainly spoons, we dig a tunnel under the city and release it into the wild…”). Then there’s the bizarre appearance of the Abominable Snowman (“Do I look abominable to you? Why can’t they call me the adorable snowman or the agreeable snowman?”)… Really I could go on and on. The film also features one of Pixar’s most thrillingly imaginative and emotionally resonant third-acts, with a climactic chase through multiple door portals a particular highlight.

Aside from being an absolutely first-class piece of family entertainment, Monsters Inc has subtle but interesting things to say about childhood innocence and the nature of parenting. It is also an empowering film for children, inviting them to laugh at the monsters they fear in the dark, rather than be scared by them. Speaking of laughter, in the story it is gradually discovered that laughter is much more powerful than fear as a source of energy for the monster world. One is reminded of Bible verses such as Proverbs 17 verse 22 about laughter being good medicine. There are many, many laughs in Monsters Inc for children and grown-ups alike.

You’ve doubtless seen it before (probably a lot, if you have children of your own), but Monsters Inc remains one of Pixar’s most endlessly re-watchable movies.