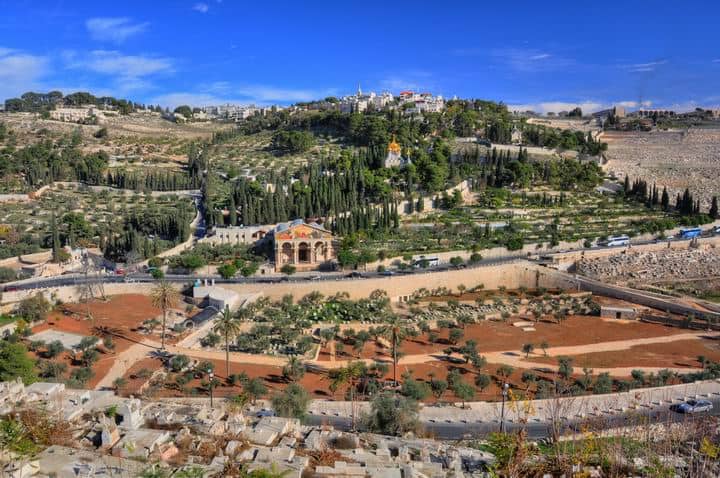 Jerusalem – The Mount of Olives

The Mount of Olives – The Oil Press

The Mount of Olives is mentioned in scripture many times. Garden of Gethsemane is located on the Mountain itself and below it is the Kidron Valley. Gethsemane is derived from two Hebrew words – ‘gat’ and ‘shemanim’. Gat means “a place for pressing oil or wine” and   Shemanim means “oil”. During Jesus’ time, this is the place where the oil press would have been situated. Ray Vander Laan describes the process on his website That the WORLD may know:

“During Jesus’ time, heavy stone slabs were lowered onto olives that had already been crushed in an olive crusher. Gradually, the slabs weight squeezed the olive oil out of the pulp, and the oil ran into a pit. There the oil was collected in clay jars.”

There are few people, who upon visiting this historical site, can escape the huge spiritual significance of what the Garden of Gethsemane represents. Jesus’ final hours, prior to His arrest where spent there in prayer and agonizing before God. The location where he was betrayed and subsequently arrested. is extensively documented in all the Gospels.

Many using the analogy that Jesus was being pressed just like the oil press, except for Jesus it was the weight of the sins of the world upon His shoulders. His sweat dripped as drops of blood falling to the ground (Luke 22: 44).

Therefore to actually visit the place where all this occurred, is a deeply significant and spiritual experience.

A Place of Refuge

‘David continued up the Mount of Olives, weeping as he went’;

Therefore, it is hardly surprising that this hallowed place has become one of the most spiritually evocative locations on the planet. 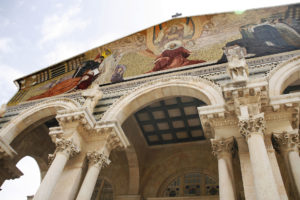 Over the centuries, churches and monasteries have been built on the Mount of Olives. As you approach from the Damascus Gate route, you see before you the old caves – ancient burial sites. Here you get a real sense of the history of the place and what it would have looked like thousands of years before. Scattered trees adorn the mountain face. It isn’t until you turn the corner and met with the magnificent building referred to as The Church of All Nations. The church site dates back to a Byzantine basilica of the 4th century that was subsequently destroyed by an earthquake. It is instantly recognizable by its ornate painted front,

So what makes this church unique from any other? Well, the building is a Roman Catholic church, what makes it unique is that there is an ‘open altar’ located in the gardens nearby which is used by other believers from different denominations throughout the world. Therefore, not only is it unique, it is functional and totally integrated. The Mount of Olives derives its name from the olive trees that are grown there, but it is also a deeply sacred site for Jews for a number of reasons:

In the Garden of Gethsemane you are immediately captivated by the haphazardly structured olive trees that almost look etched in pain. As they reach out towards the sky with awkwardly positioned branches, you think to yourself ‘if trees could talk, what could these trees tell us about that fateful night?’

Some people debate that any of the trees date back to the time of Christ, however, having seen them first-hand I would have to disagree. I am convinced some of these trees are extremely old, perhaps even older than 2000 years. What has been proved, however, is that each olive tree in the Garden has a  ‘genetic fingerprint’. What scientists have discovered is that eight of these trees are from the same lineage as the original ones that would have been in the garden dating back to the time of Jesus.

One thing remains – Gethsemane is still a place of refuge, contemplation and soul searching over 2000 years later…it is also the location where Jesus Christ will return…

“Coming out, He went to the Mount of Olives, as He was accustomed, and His disciples also followed Him.” Luke 22:39