BREAKING
Catch a Ride on a Shared Scooter—“Micro-mobility” Coming to Tel Aviv Next...
Israel Military to Conduct First-ever Simulated Strike on Iran
‘Injury to the Heart of Iran’: Details on the Life and Death...
STAND WITH UKRAINE
Home Tags Posts tagged with "natural gas"
Tag: 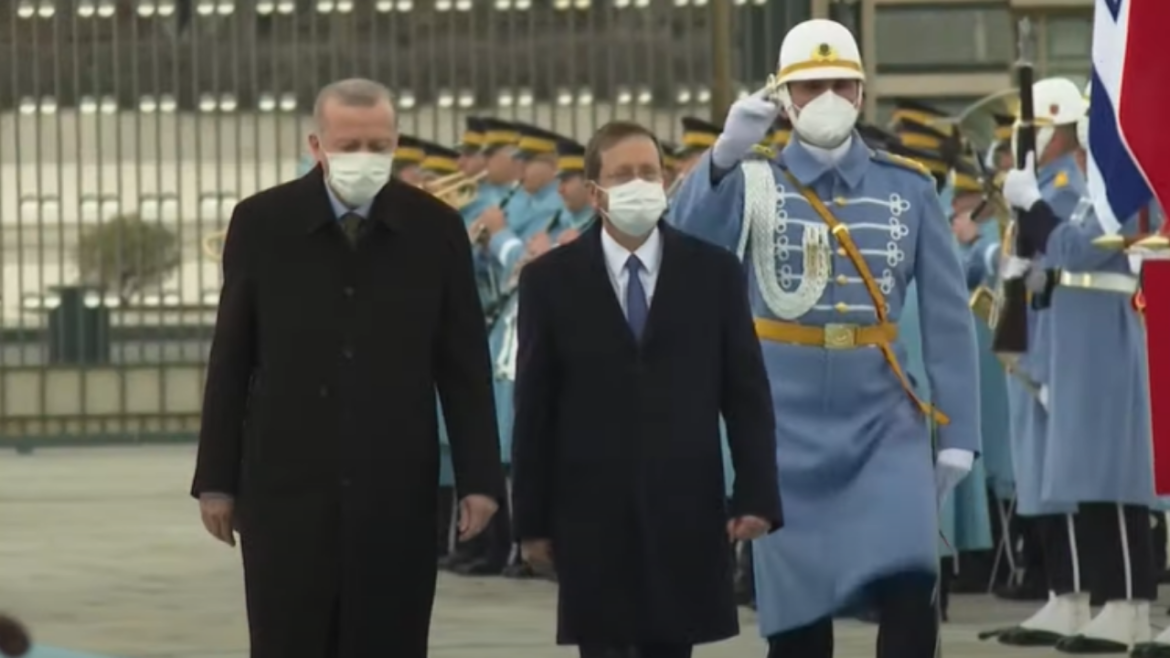 Note: Yes, it is true that I was in Istanbul, Turkey last week…and I am not denying that I was in high-level talks with Turkish leaders—neither am I claiming it…but it is interesting that a week later, after more than a decade of a severe strain in relations, we have a major breakthrough (for those who don’t know me well, I am being silly about the first part…or am I?

Israel and Turkey haven’t really been on good speaking terms since 2010—but on Wednesday, Israel President Isaac Herzog was welcomed by Turkey’s President, Tayyip Erdogan, to his mammoth 1,000-room palace with a 21-gun salute, a sky blue-uniformed honor guard holding up bayonets and swords, and the playing of Israel’s national anthem, Hatikvah.

Prior to leaving for Turkey on the 24-hour trip, Herzog said, “The relationship with Turkey has had its ups and downs in recent years — we will not agree on everything, but we will try to restart relations. Relations with Turkey are important to Israel and the whole region. Certainly, when world order is shaken (referring to Russia’s war on Ukraine), it is important to maintain stability in our region.”

“My vision is Jews, Muslims, and Christians living in peace in our region, in a way that brings prosperity to the region. I hope that after my visit, we will start the process of serious, deep diplomatic discourse to bring advanced ties and positive results.”

The last visit by an Israeli high official—former Prime Minister Ehud Olmert—was fourteen years ago, in 2008. Diplomatic relationships went into the deep freeze in 2010-2011, when Turkey kicked out Israel’s ambassador from Ankara and recalled theirs from Tel Aviv in response to Israel refusing to apologize for a raid on a Turkish ship.

In 2010, the “Mavi Mamara” (remember the “Gaza Freedom Flotilla”? —a group of activists from Turkey, the US, and around the world on boats trying to illegally dock in Gaza; and some in the group had known ties to Hamas) attempted to break through an Israeli naval blockade on Gaza. Ten Turkish citizens were killed, and several Israeli troops were seriously wounded.

In the years since diplomatic ties were severed, the relationship between the two nations has been icy and even hostile (in rhetoric). Former Israeli Prime Minister Benjamin Netanyahu and Turkish President Erdogan often made headlines with their war of words—calling each other terrorists and murderers. There was a brief diplomatic ceasefire from late 2016 to the middle of 2018, but things have been far from cordial since then.

The hope from Herzog’s visit is that Turkey and Israel could re-establish ties and potentially work together to deliver natural gas to Europe. Last month, Erdogan said that a gas partnership would be on the table for discussion.

There is no question in my mind that Turkey saw other Muslim nations reaping the benefits of good relations with Israel (UAE, Morocco, Bahrain, etc.) and didn’t want to be left out. There is much to gain from Israel—from security to technology, and now, natural gas.

“We could use Israeli natural gas in our country, and beyond that, we could also work together to carry it to Europe,” Turkey President Erdogan said. Israel had a project in the works with Greece and Cyprus to build a pipeline to supply Europe, but it stalled in January when the US pulled out of the deal. Turkey had a plan of its own, but due to economic crises at home, they are looking to improve their relationships with their neighbors, like Israel, and even former rivals, like the United Arab Emirates.

“The improvement of our political relations will further strengthen our trade ties,” Erdogan said in an interview with Turkey’s Anadolu news agency. “Regional trade will create a very positive infrastructure for fostering regional politics that are far from war.”