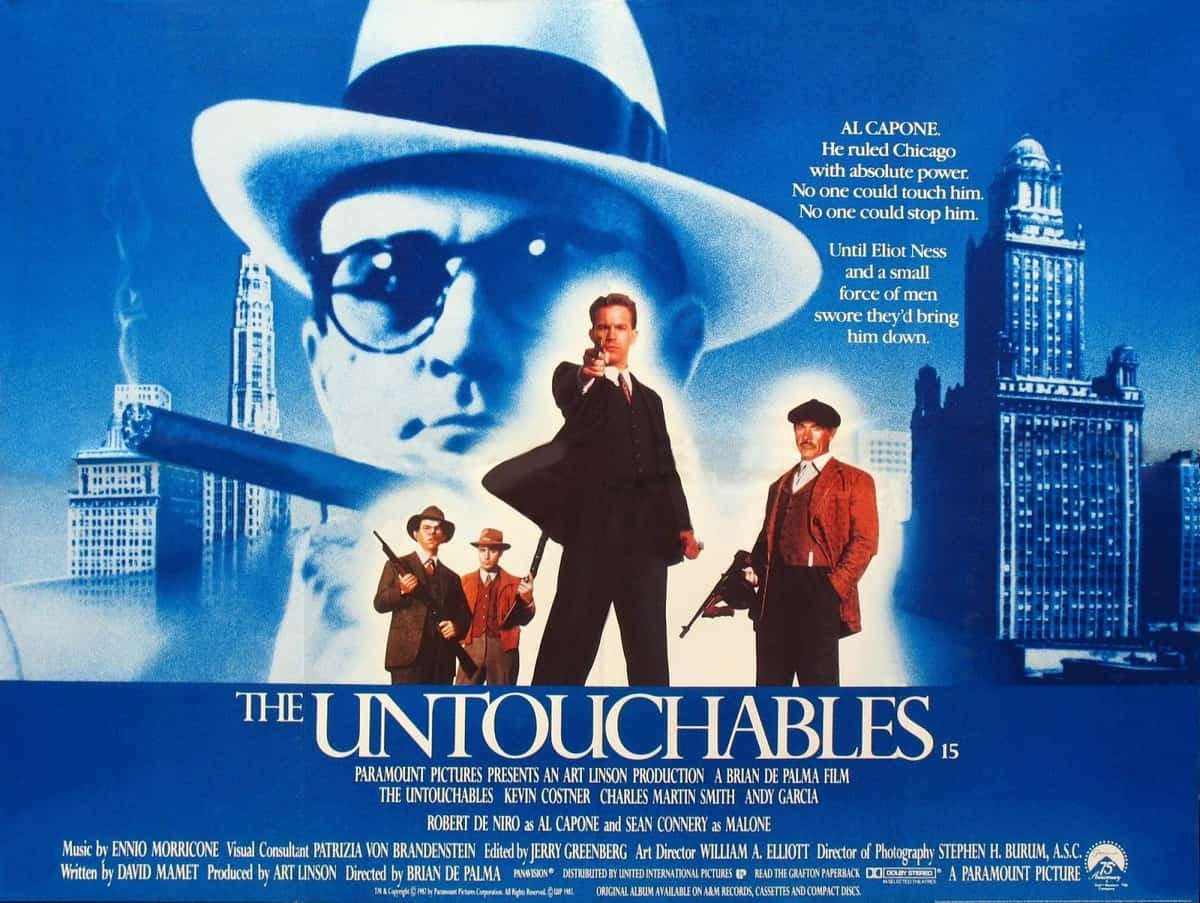 Movies with a Message: The Untouchables (1987)

“He pulls a knife? You pull a gun. He sends one of yours to the hospital? You send one of his to the morgue. That’s the Chicago way, and that’s how you get Capone!”

The 1987 Best Picture Oscar went to Bernardo Bertolucci’s The Last Emperor, but this is a much more entertaining watch. Brian DePalma’s gripping, violent and quite brilliant take on Elliot Ness versus Al Capone (loosely based on the TV series), is in one sense a straightforward story of good versus evil, but in addition I have always found it to contain interesting spiritual metaphors which I will return to in a moment.

Ness’s rather unrealistic view is that regardless of whether or not it’s a harmless drink, the law is the law (however foolish) and must be upheld. Needless to say the notoriously corrupt police are in Capone’s pocket, so at first Ness’s actions are ineffective and embarrassing. However, when a young girl is blown up in a café bombing ordered by Capone, tough beat cop Malone (an Oscar winning Sean Connery) offers Ness his assistance. He and Ness form an elite squad that also includes Treasury accountant Wallace (Charles Martin Smith) and, on Malone’s advice (“If you’re afraid of getting a rotten apple, don’t go to the bowl, pick one off the tree”), rookie cop Stone (Andy Garcia).

This squad of “Untouchables” goes on to rock Capone’s world with successful raids. They also look into unorthodox, albeit historically accurate, ways of prosecuting him (“Try a murderer for not paying his taxes?” is Ness’s initial incredulous response). However, once Capone begins to see Ness and co as a genuine threat, things get considerably uglier and bloodier. Ness’s wife and child have to go into hiding once potential witnesses are brutally assassinated, and the stakes get higher and higher amid the rising body count.

Performances are tremendous, David Mamet’s screenplay razor-sharp, and De Palma stages some terrific action scenes, most notably a suspenseful homage to the Odessa Steps sequence from Potemkin. However, what elevates this even further are the spiritual metaphors that have always been clear as crystal to me, regardless of the fact that they were probably unintentional.

To take the early sections of the film as an example, it takes courage to stand up for what is right in the face of ridicule, but Ness carries on regardless. When he is then visited by the distraught mother of the girl who was blown up, the righteousness of his mission is powerfully affirmed. This is war, and he will not compromise. Nor will Malone, who warns Ness that he must be prepared to go all the way, because their enemies will not give up the fight until one of them is dead.

All of this resonates powerfully on a spiritual level, especially later as the cost of standing for what is right becomes increasingly apparent, with characters being “martyred”, metaphorically speaking. But as things get increasingly dangerous, Malone constantly challenges Ness with this recurring question “What are you prepared to do?” What indeed, are we prepared to do in a spiritual battle for the human race? The response, from Ness, he yells at Capone: “Never stop fighting till the fight is done!” For Christians the battle is already won, but there is still a fight, and as believers we have to be in it, prepared to go all the way.

For that reason, The Untouchables means more to me than just a first-rate gangster thriller. On a metaphorical level, it’s an affirmation of the spiritual battle we are all in as Christians.