BREAKING
Cancer Patient Survives A ‘Death Sentence’ & Receives A Surprise From Jennifer...
TikTok Kid Preacher Feels God In His Prayer Time; “I Am Not...
“Jesus Appeared To Me Twice So That This Message Will Be Delivered...
Home Tags Posts tagged with "New Mexico"
Tag: 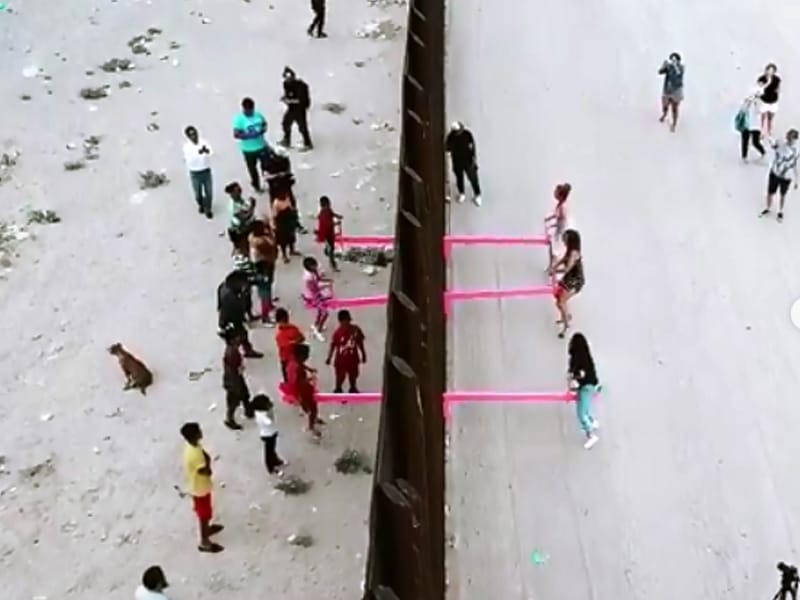 Seesaws At The US-Mexico Border

Two California artists installed seesaws at the US-Mexico border to preach a message of unity.

Ronald Rael, architect professor at the University of California, and Virginia San Fratello, associate professor of design at San Jose State, originally came up with an idea of the binational seesaw in 2009. They decided to name their idea the “Teetertotter Wall” and they planned to install it between the US and Mexico border.

A seesaw at the US-Mexico border

After a decade, their concept became a reality. The seesaws were installed at Sunland Park, New Mexico separated by a tall steel fence from Ciudad Juarez, Mexico. However, this is a playground like no other! People from both nations joyfully came to play with each other.

According to architect Ronald Rael, the “Teetertotter Wall” serves as a heartbeat between the two countries.

“The wall became a literal fulcrum for the U.S. – Mexico relations and children and adults were connected in meaningful ways on both sides with the recognition that the actions that take place on one side have a direct consequence on the other side,” Ronald said in an Instagram post.

One of the most incredible experiences of my and @vasfsf’s career bringing to life the conceptual drawings of the Teetertotter Wall from 2009 in an event filled with joy, excitement, and togetherness at the borderwall. The wall became a literal fulcrum for U.S. – Mexico relations and children and adults were connected in meaningful ways on both sides with the recognition that the actions that take place on one side have a direct consequence on the other side. Amazing thanks to everyone who made this event possible like Omar Rios @colectivo.chopeke for collaborating with us, the guys at Taller Herrería in #CiudadJuarez for their fine craftsmanship, @anateresafernandez for encouragement and support, and everyone who showed up on both sides including the beautiful families from Colonia Anapra, and @kerrydoyle2010, @kateggreen , @ersela_kripa , @stphn_mllr , @wakawaffles, @chris_inabox and many others (you know who you are). #raelsanfratello #borderwallasarchitecture

The University of California also saw the scene in the playground as a “unifying act.”

The New Mexico town is a place where many militia and detained migrants settled in this year. However, the Seesaws at the US-Mexico border changed the tone of the town.

The dull brown border wall was brightened by the pink seesaws. There was an exchange of laughter and conversation between the two nations.

This scene is truly a representation of unity and acceptance.

How good and pleasant it is when God’s people live together in unity!  [Psalm 133:1]