BREAKING
100-Year-Old Woman Celebrates Life At Worthing, Says God Has Helped Her Through
‘Jesus In The Super Bowl’: Campaign Spends Millions On Ads Despite Skeptics
Disney Star Joshua Bassett Has Turned To Jesus; “Jesus Is The Only...
Home Tags Posts tagged with "nfl qb"
Tag: 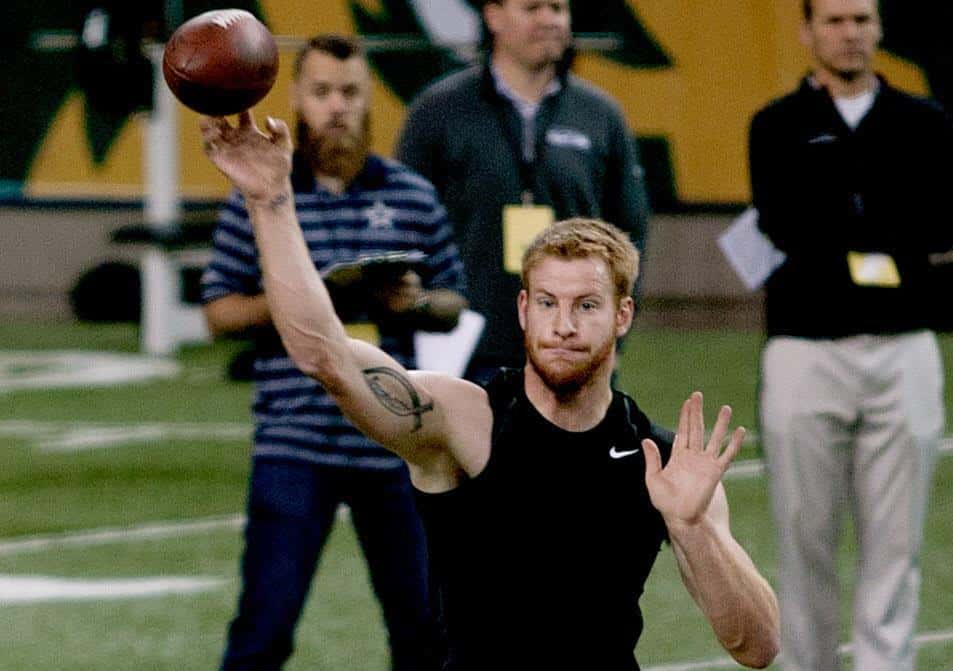 What’s the Most Common Lie the Devil Wants You To Believe? NFL QB Shares His Thoughts

The Most Common Lie the Devil Wants You To Believe

Carson Wentz is a second-year quarterback for the Philadelphia Eagles, who, apart from his sporting acclaim, is known for professing his faith wherever and whenever he can. Carson was born into a nominal Christian family, in a traditional church setting which was often hypocritical, but he is now on fire for God.

He grew up believing the lies that the devil put into his head about Chrsitianity, and now warns people about this deception. In an interview with Associated Press sports writer Rob Maaddi, Carson pointed out the biggest lie the devil wants people to believe.

“Being saved by works is obviously a lie, but it’s a lie that a lot of people believe,” he said. “It’s a lie that’s buried deep in our culture. Even when I was a kid, with sports and anything I did, I had to work my tail off to earn what I got. That’s how we’re wired, that’s how the world instills this value. We have to work, work, work, and earn everything we receive.”

Carson shares how he would go to Church and felt he was a good person because he prayed and did everything right and for this reason he felt he was going to be saved. “That’s the lie that the devil wants you to believe,” he says. Satan aims to deceive people, so they fall into a trap of not believing they are good enough for Heaven, or for God.

However, Carson knows better today. He is convinced  that Heaven is not something that can be earned. As Ephesians 2:8-10 says: “For it is by grace that you have been saved through faith — and this is not of yourselves, it is the gift of God — not by works, so that no one can boast. For we are God’s handiwork, created in Christ Jesus to do go works which God prepared in advance for us to do.”

Carson has discovered the grace of God and learnt that true Christianity is the only faith in the world that you can’t earn Heaven. He now knows that the only way to gain acceptance into God’s presence, is by confessing one’s sins to God, and asking Him to reside in your heart.

“Christianity says it’s done; Jesus already did it. He took it all for you and this is what Paul is saying here in Ephesians,” Carson added. “He’s saying it’s by grace alone that you’ve been saved, not by works so that no one can boast. I mean, he can’t lay it out much clearer. Then he says, ‘But we are God’s handiwork, created in Christ Jesus to do good works.’ See we’re not saved by our actions but our actions come out of our faith.”

Carson points out that Jesus already died for our sins, so that we don’t have to suffer the eternal consequences of our decisions. If He didn’t die for us, then none of us would be good enough to live in Heaven with our Heavenly father. We are not saved by our actions, Jesus saved us. He is the one true way to Heaven.

Carson also makes a point to discuss the actions that stem from our faith in Christ. “I think it’s a daily thing. I know for me, we get caught up in doing good, doing good, doing good. That it’s a daily thing for me to just remind myself like without Jesus I can’t do it,” he said. “I can’t earn my way to Heaven and nobody can. So, I really challenge every one of us to have that perspective because it’s so easy to get caught up in doing good and thinking that I’m good enough, but without Jesus, none of us are.’”

Carson challenges everyone to stand up for what they believe in, and to have an unwavering faith in the God who made us. His love for God can be seen on the field, throughout his social media, and through his foundation Audience of One (AO1).

His pinned tweet on Twitter reads, “You can’t earn grace. Its free. It’s the greatest gift there’s ever been and will be. Accept it. Jesus is waiting for you and loves you #AO1”

It’s wonderful to see NFL stars give glory to God, or point towards Heaven following a football game, and it’s clear to everyone that Carson acts upon his faith all day long.

Audience of One which he launched in 2017 aims “to demonstrate the love of God by providing opportunities and support for the less fortunate and those in need.” This is in keeping with Carson’s life motto and the tattoo on the underside of his right wrist.  No matter what he does in life, Carson is living for an Audience of One — Jesus.

The organization works, “to care and provide food, shelter, and educational opportunities for underprivileged youth.” It also provides, “outdoor opportunities for individuals with physical challenges, the underserved, or US vets.” Lastly, it works, “to support youth in the Philadelphia area by providing service dogs to assist with their development and quality of life.”

Carson is unapologetic about his faith, in all aspects of his life. He wants all children to not only have access to things like education, food, and shelter, but also to Christ’s love. He knows this is the most important thing we need in our lives, and works to make it known everyday. He motivates those both young and old to get involved in their communities, and share the truth of God’s grace to those around them.