BREAKING
Cancer Patient Survives A ‘Death Sentence’ & Receives A Surprise From Jennifer...
TikTok Kid Preacher Feels God In His Prayer Time; “I Am Not...
“Jesus Appeared To Me Twice So That This Message Will Be Delivered...
Home Tags Posts tagged with "No arms"
Tag: 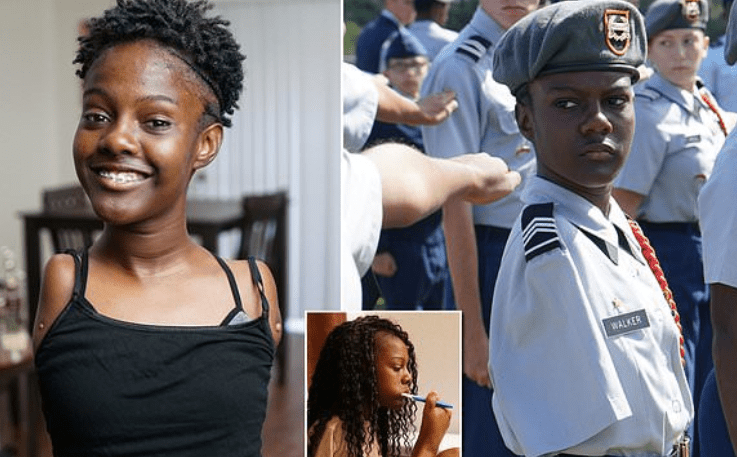 Girl Born With No Arms Becomes An Army Cadet

Donavia Walker, a 16-year-old girl who was born with Bilateral Amelia – a rare condition that caused her to be born without arms – has become a star army cadet, in the US Junior Reserve Officers’ Training Corps (JROTC).

Having a determined personality, Donavia can do practically everything she wants to. 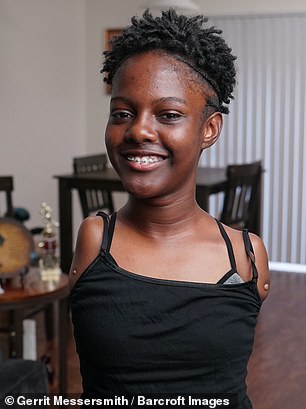 According to her mother, Tisa Jones, Donavia’s condition was very scary at first and left her feeling extremely shocked.

“It was kind of scary. When Donavia was born I saw these different nurses and doctors just run in the room.” Tisa recalled “I took a glance over and I saw one of her arms was missing.” She added.

As a mother, it can be painful to see your newborn baby not fully developed. Imagine what kind of emotion she had to go through, seeing her little baby in that kind of position. 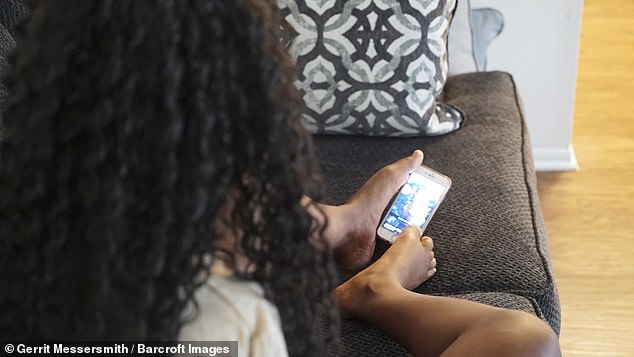 Growing up, Donavia experienced bullying from other kids, but she didn’t let their words hinder her from doing what she had to do. She started to developed her own techniques to do simple tasks every day. She even learned how to drive using her feet; played football and joined the cheerleading squad.

“People would put me down because they didn’t think I could do as much as I can. They would tell me, ‘You can’t hold it, you have to use your hands to hold it’ or ‘You can’t get that, you gotta use your hands to get it. I was like, ‘I can get it with my feet. I will find a way,’” she said.

Cadet in the making 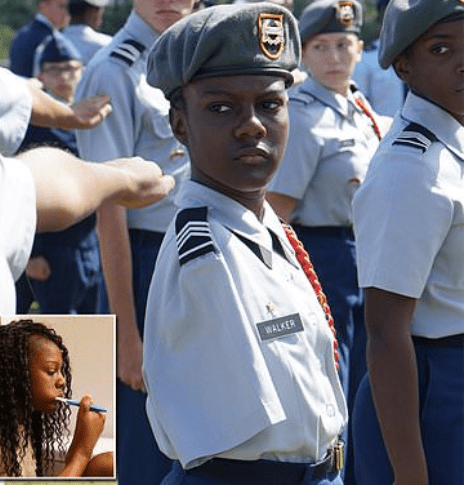 One of Donavia greatest accomplishments was to become a squad commander in the JROTC.

Sergeant Major Rudy Carter, Donavia’s instructor, said that he still remembers the first-day she walked through the door. “I had high hopes for her and she hasn’t disappointed,” he said.

And every time Sergeant Carter sees Donavia walk in the classroom, it reminds him of why he wakes up every morning – it reminds him that there is no limit of what he can do. “It’s people like Angel (Donavia) that make my job worth getting up for in the morning, make me want to get up and do the best that I can,” he said.

As for Donavia, she loves to inspire other people by the way she handles her circumstances. She loves to encourage people with a physical condition like her to love themselves more. Much like Pastor Jose Benitez of Mexico!

Share this if you want others to be blessed too! 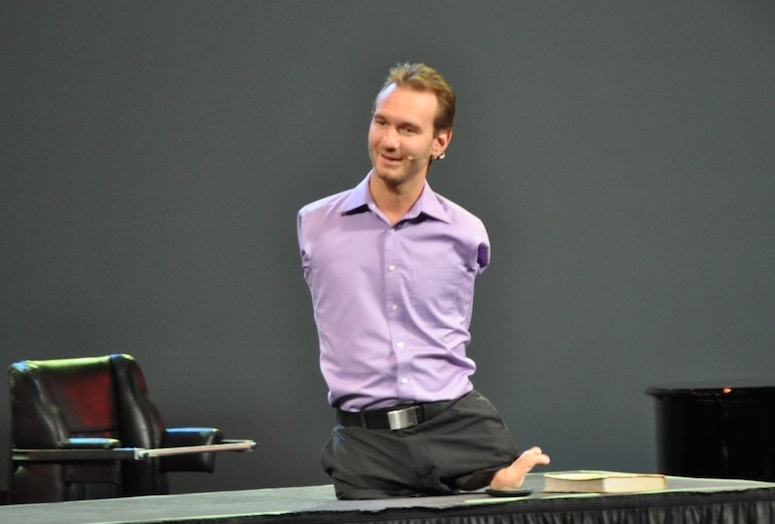 Watch: Born With No Arms or Legs, Nick Vujicic Talks About His Journey to Overcoming Hopelessness

In 1982, Nick Vujicic was born in Australia—a healthy baby, except for one thing: He was born without arms or legs. Born with a tetra-amelia syndrome, Nick struggled as a young boy with the knowledge that nobody knew why—or why him. His mind was darkened by thoughts of suicide and depression as peers bullied and teased him, ignorant of how deep their words scarred. At the age of 10, he tried but failed to drown himself in 6 inches of water.

But by the age of 29, over 1 billion people knew him as he spoke a message of hope at TEDxNoviSad in 2012. According to Nick Vujicic, “I still have no arms and no legs, but everything has changed.”

Why the profound transformation?

Nick found healing hope through a personal relationship with God. Period. That hope has not only changed his life, but it has drastically altered the lives of those he has touched with his message of hope.

So what exactly is his message of hope? “Transforming walls into doors; changing obstacles into opportunities.”

Nick Vujicic fully admits that everyone has pain, of one form or another. For him it was severe physical disability. For others it might be depression. Pain can feel like an opaque, immovable wall that blocks the way forward.

But hope, born through love, morphs this obstacle into a door, which may lead to something unimaginable—like Nick’s two published books, his wife, his child, his speaking career, and his impact on the lives of millions.

How did Nick Vujicic find love?

The first step was overcoming his anger. This is not a trivial step. Instead of being angry for what he didn’t have, he shifted his focus to what he did have—and became thankful.

But thankfulness is not enough. It was the unconditional love of his parents that allowed Nick to be who he is today. His parents regularly told him he was beautiful and encouraged him to ignore the bullies at school. Ultimately, it was this deep, devoted love that prevented him from committing suicide. As he was drowning himself, he realized that his suicide would cause his parents unthinkable despair. For them he was strong.

In his speech, Nick repeats the mantra of Jesus: “The greatest thing is love.” (See Matthew 22:36-40.) Today, Nick not only has the love of his parents, but also his wife—and, most importantly, Jesus.

Not all love is equal

In his TED speech, Nick teaches that “we all want love. That’s why we do what we do.” From bankers to orphans, this is a core human need. However, people who try to fulfill this need with “money, sex, alcohol, pornography, fame, and fortune” will never be satisfied.

According to Nick, money does not heal the soul. And sex out of marriage is like “a $5 Gucci watch; you can sleep with as many people as you like, but you never know for sure if they love you.”

True love—like the love of God—strengthens, encourages, and sustains. It does not tear down with hateful speech or cruel actions.

Still having trouble evaluating the purity of love?

The Bible is explicit about the characteristics of pure love: “Love is patient, love is kind. It does not envy, it does not boast, it is not proud. It does not dishonor others, it is not self-seeking, it is not easily angered, it keeps no records of wrongs. Love does not delight in evil but rejoices with the truth. It always protects, always trusts, always hopes, always perseveres. Love never fails.” (1 Corinthians 13:4-8)

That’s right—love rejoices with the truth. Nick learned to overcome the lies that were dragging him down and staked his life on the truth: “Truth encourages me to be all I can be.”

Although Nick has not received a healing miracle, he maintains hope. In fact, he keeps shoes in the back of his closet—just in case! Even more powerful is his commitment to making his life a miracle in the lives of others.

When he was 24, he finally—for the first time in his life—meant someone with the same condition—a young child. He knows that this child will one day struggle with depression, as he did, but Nick will be there to cheer him on through thick and thin.

God has blessed Nick with the opportunity to be a miracle for this child.