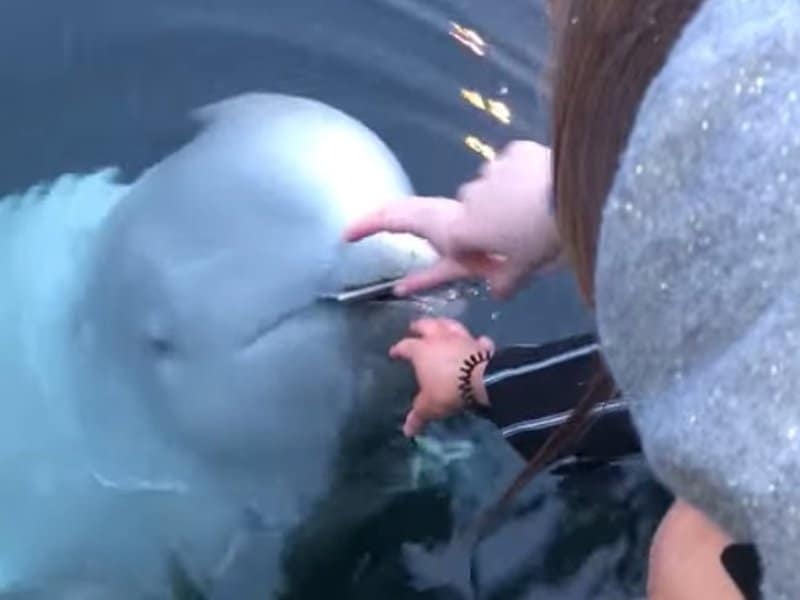 The video of a beluga whale in Norway has gone viral after it returned the smartphone of a tourist who dropped it into the water. This is one highly intelligent mammal and not without controversy. Some are accusing it of being a Russian spy!

In May, a rare beluga whale was spotted off the coast of Norway swimming next to a fishing boat. Norwegian fishermen discovered that it was unusually tame and was wearing a harness with the words ‘Equipment of St  Petersburg’. The harness was also discovered to have a mount for a camera.

Speculations were going around that the whale is a spy trained by the Russian Navy. Its unusual friendliness with humans proves that it has been trained. It seems so comfortable with humans that it even comes when called.

The white whale, as it is more commonly known, has become a tourist attraction in the area overnight. Not only did it allow the harness to be removed but humans have been petting it.

Ina Mansika was one of those tourists eager to have a close encounter with the friendly whale. As she was trying to peek over the dock, her phone accidentally fell out of her unzipped pocket into the water. Ina thought she would never see it again but then the white mammal dived deep into the dark waters and resurfaced with the phone resting gently in its mouth.

Everyone was amazed and the video has been shared over and over again and is featured on multiple YouTube channels!

On May 11, Morten Vikeby, a former journalist, claims the beluga is similar to one he encountered in 2008. It was at a Russian diving center and the beluga was interacting with children with mental disabilities.

“Maybe it wasn’t the same whale but it acted in the same way,” he told The Guardian. “The whale has been accused of espionage. I see it as my big purpose to defend him.”

The full story about the beluga whale is yet to be revealed. But there’s no doubt that this whale’s kindness and friendliness has put a smile on the faces of millions of people. It’s such a great reminder of how extraordinary God’s creation really is.

Read also: Modern Day Jonah – Diver Caught In The Mouth Of A Whale