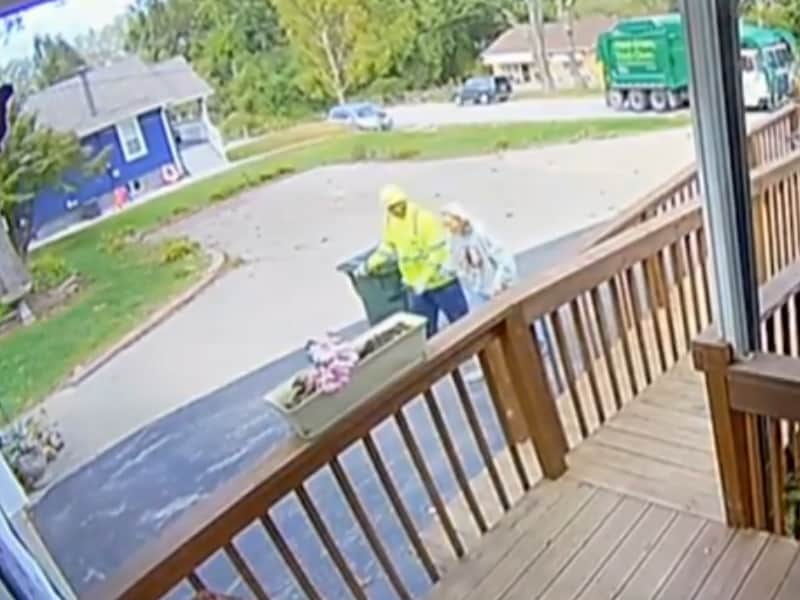 A sanitation worker was caught on camera helping an 88-years-old woman with dementia.

On October 15, a security camera installed on Opal Zucca’s home in Missouri caught a very touching and emotional moment. A sanitation worker went out of his way to help Opal, an elderly woman with dementia, walk up the driveway.

Colette Kingston, Opal’s daughter, of Kansas City got a notification on that Tuesday morning.

“I get a notification on my phone when there is movement in her driveway,” Colette said.

Upon checking the video from the security camera, she saw a sanitation worker holding her mother’s hands while helping her. The kind man was helping her walk up the driveway while pulling the woman’s trash bin. It made Colette emotional.

“He was bringing up her trash can and just helping her walk up the driveway,” Kingston said. “It made me teary-eyed to see that someone would be so compassionate and caring,” she added.

Colette then revealed that her mother tripped and hit her head in January while trying to retrieve the trash bin. The kind gesture of the man means so much for her and her mother.

“I’ve noticed him a few times on the camera returning the trash can, but not to this personal extent,” she said. “It’s like his own grandmother that he’s helping, as one of his family members.”

Through the help of Facebook, Colette was able to identify the man as Billy Shelby who works with Waste Management.

Opal looks forward to seeing Billy every week and she even says a prayer for him when he is there.

“I’m just thanking God that he’s there doing his part to help her,” Colette said.

As seen in the video, the two get along as if they were family.

“Knowing that somebody else would care for a stranger like they would their own family member, it reminds me that there are lots of good people still around,” Colette shared.

Watch the latest video at foxnews.com