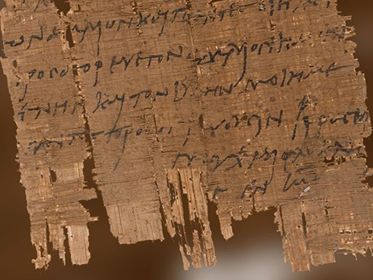 A 1700-year-old letter that was recently discovered is said to reveal the way Christians actually lived centuries ago.

The Papyrus P.Bas. 2.43 was written by a man named Arrianus to his brother Paulus, who was believed to be named after the apostle Paul.  The letter has been dated to 230s AD and is thus older than all previously known Christian documentary evidence from Roman Egypt.

It describes day-to-day family matters and provides insight into the world of the first Christians in the Roman Empire.

“The earliest Christians in the Roman Empire are usually portrayed as eccentrics who withdrew from the world and were threatened by persecution. This is countered by the contents of the Basel papyrus letter,” said Sabine Huebner, professor of ancient history at the University of Basel in Switzerland.

The letter was concluded by the phrase: “I pray that you farewell ‘in the Lord.” This statement is their proof that the writer was actually a Christian.

“The use of this abbreviation – known as a nomen sacrum in this context – leaves no doubt about the Christian beliefs of the letter writer,” Sabine added. “It is an exclusively Christian formula that we are familiar with from New Testament manuscripts.”

The University of Basel has been holding onto the 1700-year-old letter for the past 100 years. It originated in the village of Theadelphia in central Egypt and belongs to the Heronius archive. The Heronius archive is the largest papyrus archive from the Roman Times.

Arrianus and Paulus were the sons of the local elite, landowners and public official. The letter discusses politics, food, and faith during those times.

The transcript of the letter:

“Greetings, my lord, my incomparable brother Paulus. I, Arrianus, salute you, praying that all is as well as possible in your life.

“[Since] Menibios was going to you, I thought it necessary to salute you as well as our lord father. Now, I remind you about the gymnasiarch, so that we are not troubled here. Heracleides would be unable to take care of it: he has been named to the city council. Find thus an opportunity that you buy the two [–] arouras.

“But send me the fish liver sauce too, whichever you think is good. Our lady mother is well and salutes you as well as your wives and sweetest children and our brothers and all our people. Salute our brothers [-]genes and Xydes. All our people salute you.

“I pray that you fare well in the Lord.”

What a miracle that we are still digging up more and more artifacts dating back to the time of Christ!