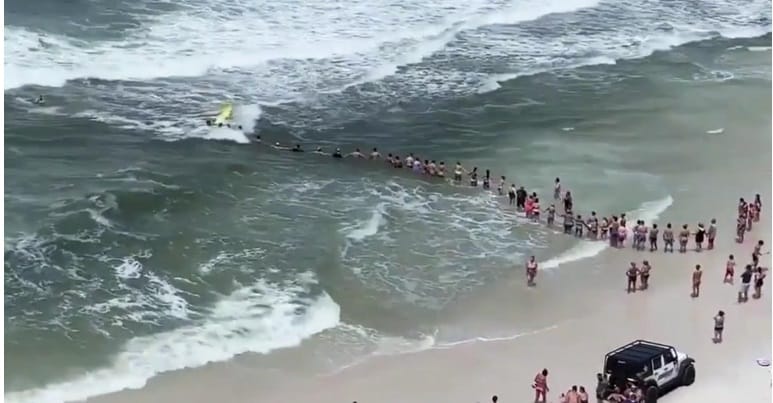 A human chain was formed by beachgoers to save two swimmers caught in a strong riptide on Panama City Beach, FL.

Double red flags were raised along the coastline of Panama City beach, giving warnings to beachgoers to stay out of the water because of a dangerous rip current brought on by tropical storm ‘Barry’. The storm was on its way over to the Gulf of Mexico, moving up to Louisiana, and the strong current underwater had already taken the life of one person.

“Although many don’t heed the warnings, you’re all worth the risks. Our hope is that by making these posts, the masses will be informed of what we risk, everything when we cross the thresholds of our firehouses,” Panama City Beach Fire Rescue wrote.

Two swimmers stuck in the current

People saw the figures of a man and a woman in the ocean, caught in a strong rip current. The situation was deadly because even professional rescuers were struggling to rescue the swimmers. One sheriff’s deputy trying to help the swimmers also got stuck in the raging stormy waters.

A group of beachgoers saw the dire situation so they got up together and started to form a vast human chain. Dozens started to line up. According to the report, there are fifty to one hundred people who joined the human chain to help and rescue the two swimmers and the sheriff’s deputy.

One visitor to the beach Brian Daniels who was on vacation that time, recorded a video showing the group of people joining together to form the human chain.

Because of the beachgoers’ quick thinking and cooperation, all the people caught in the riptide were rescued.

Thank the Lord everyone is safe!