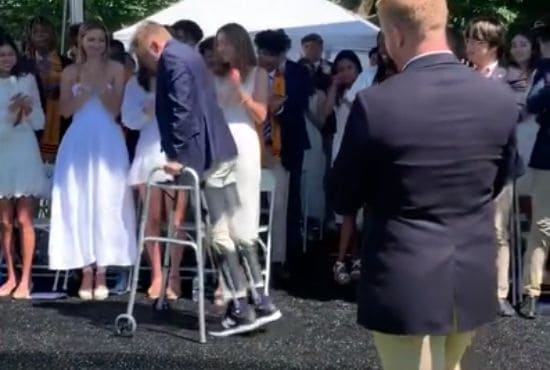 A partially paralyzed teen took his first steps after his injury nine months ago that left him paralyzed from his waist down to get his diploma during the graduation.

The 18-year-old Jake Thibeault was one of the top high school hockey players in England. He played for Milton Academy and a private club called Boston Bulldogs. However, during a regional hockey tournament, he met an accident.

Jake ran into the boards and was partially paralyzed from the waist down. He underwent treatment and rehabilitation for months. Doctors were doubtful that he could walk again, but his perseverance got him back into his classroom. His goal was to walk by himself during his graduation.

“I told my parents I have an order. I’m gonna walk, then run, then skate, and I may skip run and try to skate first,” he told The Patriot Ledger in February. “But it truly goes back to just the no-quit, and I’m refusing to lose. And that stuck with me to this day, and it will stick with me until I’m on my feet.” 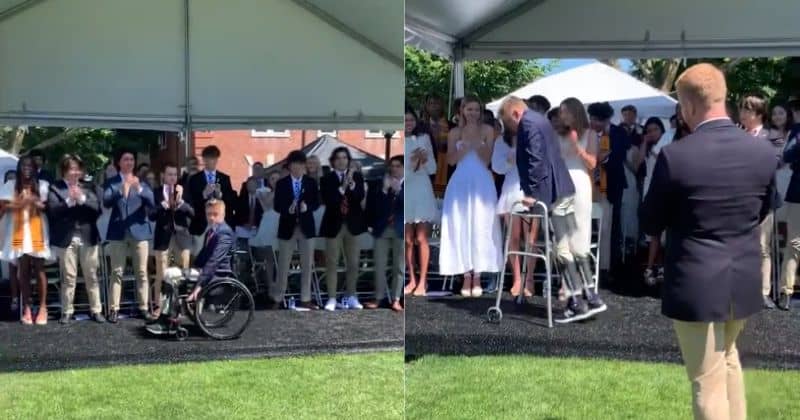 Jake fulfilled his goal on June 10 when he walked to the stage with a walker and leg braces to receive his diploma. He took his first steps since the accident nine months ago during his graduation. His fellow classmates and everyone who witnessed cheered for him.

Jake’s father, Mike, was a proud dad as he watched the emotional scene.

“Just an overwhelming feeling of being proud for Jake,” Mike said. “Never more honored to be his father.”

During the accident, he believed that his son would overcome this obstacle and he sure did!

“He’s a special kid. Nobody deserves what he’s going through,” he said at the time. “But maybe God chose him because he’s going to do it. He’s a kid that can handle it.”

Read also:  WAITRESS DONATES $777 TIP TO CHURCH BELIEVING IT WAS AN ANSWERED PRAYER FROM GOD