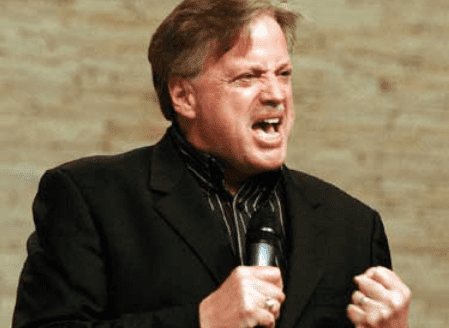 ‘Go After God!” The Heartfelt Cry Of Steve Hill Still Goes Out Today

‘Go After God!’ This was the heart’s cry of one of the most passionate ministers who ever lived – Steve Hill (1954 – 2014). Once GOD TV’s ‘resident evangelist’, he preached his heart out, sharing God’s unending mercy, while calling people to repentance. Steve’s legacy is the millions of people who responded to this call and these three simple words continue to echo the heartbeat of GOD TV, urging people everywhere to follow Jesus and fulfill His Great Commission to go into all the world.

Evangelist Steve Hill of Together In The Harvest Ministries was best known for his stirring salvation messages at the Brownsville Revival which started in Pensacola, Florida in 1995 drawing millions of people into a closer walk with Jesus. He was the visiting evangelist at Brownsville Assembly of God, pastored by John Kilpatrick, when revival broke out in the church on Father’s Day, following years of prayer.

For some five years, Steve Hill and John Kilpatrick ministered together at Brownsville and GOD TV carried many of their messages during the network’s early days, extending their reach across Europe. Now 25 years after this historic move of God started, GOD TV now has a global reach and has partnered with Christ for all Nations to re-dig the wells of this revival through Light The Fire Again, Pensacola.

Sadly Steve Hill passed away in 2014 following a brave fight against cancer. He is survived by his wife Jerri who continues to run Together In The Harvest. Despite his terminal diagnosis, Steve believed God for additional time and the Lord let him live long enough to see his daughter married as well as win many more people to Jesus through his books and heartfelt messages. (See GOD TV CEO, Ward Simpson’s interview with Jerri Hill on Today With Ward)

Steve Hill’s illustrated sermons and passion for Jesus brought many to tears, with large crowds running to the altar to give their lives to Jesus. In addition to Brownsville, we saw this through many LIVE broadcasts on GOD TV during its Battle For Britain campaign. You can watch a sample of Steve’s messages in the video below, in an episode from The G Factor, a GOD TV exclusive series recorded during the height of his Awake America mass rallies.

Go After God With Steve Hill

Watch the video below and share it with friends who aren’t believers.  In this episode of The G Factor Steve talks about The Endurance of God, which is a huge encouragement to believers. He also shares part of his powerful testimony of how he was delivered from drug and alcohol. Steve always called everyone to go after God and especially unbelievers. His invitation to them was clear: “It doesn’t matter whether or not you believe in Jesus, say this prayer ‘God if you are real, speak to me through this broadcast! Make yourself real to me.’

Pastor John Kilpatrick now heads up Church of His Presence in Mobile, Alabama and is known for both the Brownsville Revival in 1995 as well as the Bay Revival in 2010 with Evangelist Nathan Morris. We have already seen how the Lord can light the fire of revival again, through the many miracles we witnessed through the Bay Revival including one of the most notable when Delia Knox got out of her wheelchair after more than 20 years! What He has done before, He can do again. Watch all sessions of Light the Fire Again, Pensacola on demand.