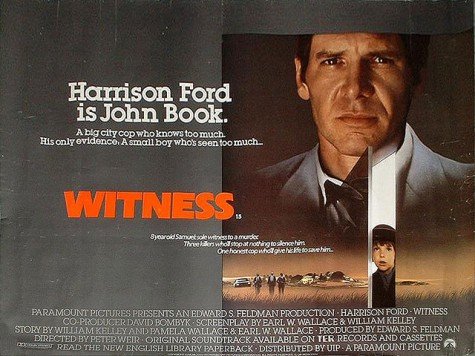 Peter Weir is one of my favourite directors, but despite critical acclaim, he has never really been rewarded the way he deserves. One such occasion was in 1986, when the Oscar for Best Picture went to Out of Africa. To my mind Back to the Future or Witness should have won, most probably the latter.

Witness is a curious hybrid film; part documentary-style drama, part love story, part modern western, and also the best thriller of the 1980s. The film opens atmospherically, with an Amish funeral. The widow Rachel (Kelly McGillis) and her young son Samuel (Lukas Haas) subsequently take a train journey to Baltimore to see her sister, but at a stop-over in Philadelphia, Samuel witnesses a drug-related murder in the railway station. The policeman investigating the case, John Book (Harrison Ford), is initially only interested in Samuel as a means of cracking the case, but subsequent plot twists cause him to end up on the run with Rachel and Samuel in tow. Whilst recovering from an injury, Book hides out on their Amish farm, causing a certain amount of consternation in the strict religious community around them. Meanwhile, the killers are unable to track Book down, as he has disappeared off the grid into a world without phones – not to mention cars, televisions, refrigerators and so on.

A career-best performance from Harrison Ford undergirds the film, which also features exceptional support from McGillis, Haas (particularly excellent), and other cast members including Josef Sommer as Book’s boss Schaeffer, Jan Rubes as Samuel’s grandfather Eli and Alexander Godunov as Daniel, a prospective suitor for Rachel following the death of her husband. Danny Glover and Angus MacInnes play the killers, McFee and Fergie, and the eagle-eyed will spot Viggo Mortensen in an early role.

The sections where Book hides out of the farm are filled with memorable moments, such as the now iconic barn-raising scene where the entire Amish community come together to build a barn in one day without any modern electrical tools. Another scene, which positively sizzles with romantic chemistry, takes place between Ford and McGillis where they dance Sam Cooke’s What a Wonderful World on the car radio.

Weir’s direction throughout is simply brilliant. An early image featuring a truck trailing behind an Amish buggy perfectly sums up the theme of clashing cultures, a theme incidentally Weir has returned to again and again in several of his films. Weir’s films are also about isolation and loneliness, and every inch of Earl W Wallace and William Kelley’s exceptional, Oscar-winning screenplay reflects this. Book is a clear loner, but Rachel is also lonely for much of the film. She begins the story mourning her husband, becomes a stranger in a harsh, violent, city, then later she yearns for the man who can never truly be part of her community. At one point, Rachel bathes by lantern light, watched by Book. The scene plays almost like a reverse of the David and Bathsheba story, only this time with the opposite outcome. As Book tells Rachel the following morning “If we’d made love last night I’d have to stay, or you’d have to leave”.

Another element of Weir’s directorial genius is evident in the murder scene itself; a shocking, unflinchingly brutal moment that turns the stomach in knots. I first saw this film quite a tender age, and it had a profound impact on me. Up until that point, my experience of screen violence was largely of the consequence-free James Bond variety. Witness forced me to confront the ripple effect a single act of violence has – not just the murder that sets the plot in motion, but also the later scene when Ford confronts tourists picking on the Amish for their pacifism. On my initial viewing, I inwardly cheered Ford when he beat up the tourists, but of course this act has serious consequences leading to his discovery in the tense final act.

Speaking of which, one brilliant moment in the finale features Ford yelling at the villain (who has McGillis hostage) and the villain yelling back. Their dialogue is completely incomprehensible, which is perfect, because the scene is shown from the terrified McGillis’s point of view. As an Amish woman who has turned her back on violence, such actions are incomprehensible. Violence never solves anything in Witness.

When the Amish community itself – the antithesis of Ford’s loner – ultimately turn the tables in a non-violent way, one is forced to wonder if there is something to their simple, peaceful way of life that perhaps other branches of Christianity have missed. Clearly, they have taken several Bible verses very literally (“Come out from among them and be ye separate…” for example), and yet, despite their strict principles, their way, most specifically their sense of community, is what brings a resolution.

It is this thought provoking aspect that sets Witness above and beyond merely being a superbly acted and directed film, and into the list of my all-time favourites. That and the wordless final moment between Ford and McGillis, which always brings a tear to my eye…