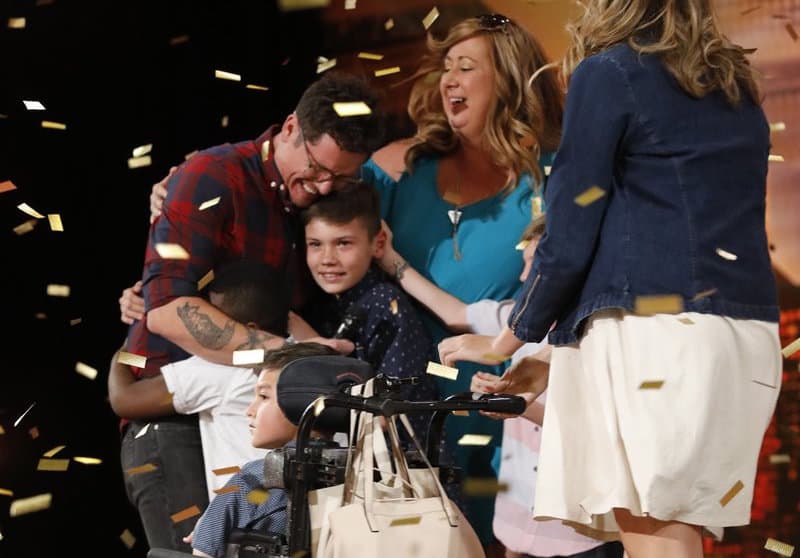 WATCH: Father of 6 Amazes America’s Got Talent With His Powerful Voice and Story!

God-chasing musician, Michael Ketterer, astounded Simon Cowell on last night’s episode of America’s Got Talent, getting a ‘golden buzzer’ from the music mogul, which takes him straight through to the LIVE shows! Not only is Michael a brilliant singer songwriter, but he and his wife Ivey are the parents of six children, which is an amazing testimony in itself.

Watch his AGT audition in the video above. “I am here to teach my children how to dream,” Michael says. “When you’re just surviving you can’t dream. It has been one of the most rewarding things providing them with a home where they are free to dream. I want to show them that if their dad can live out his dream, then nothing is impossible for them.”

Michael could not have chosen a better song than ‘To Love Somebody’ by the Bee Gees. He makes the song his own and gives the words new meaning…

“There’s a light, a certain kind of light,
That never shone on me,
I want my life to be lived with you…
There’s a way, everybody say,
To do each and every little thing,
But what does it bring, if I ain’t got you, ain’t got?
You don’t know what it’s like, baby…
To love somebody, the way I love you.”

As a Christian, Michael Ketterer knows the love of God in his life and is an amazing example of sharing that love with others.

Earlier this year we wrote about him in an article about Influence Music’s new Touching Heaven album which brought some of LA’s most gifted songwriters, producers and musicians together to glorify God with their talents.  Little did we know then that one of it’s band members was destined for international fame.

We’re inspired by Michael’s success and pray he will do well in the competition to bring glory to God.

“I’m so thankful for all of the support and love that I’m receiving from my family, friends, and people that I’ve never met before!” Michael tweeted. “My family and I are undone and are so thankful to God for this amazing opportunity. Thank you @SimonCowell for hitting that button! #AGT @AGT”

The show’s host, Tyra Banks shares her thoughts on Michael’s success: “When you do good things, good things come to you. This man didn’t have to be a father to these children, but he chose to be. He put his life and dreams on hold, to make a child’s life better. Now @KettererMusic just realized one of this dreams.”

As Simon Cowell is known for his brutal honesty as a judge, it’s quite something to get a positive remark from him, let alone his golden buzzer. Simon seems to have mellowed somewhat since he became a dad and his 2018 Britain’s Got Talent golden buzzer went to a father and son duo. The talent show impresario has launched the careers of many people who are now household names. It would be great to have a winner this year that loves God and loves people.

Michael works as a Pediatric mental Health Nurse and is a musician with Ketterer Music. He has already released five records, each with their own unique artistic spin on passionate God-chasing music. He and Ivey have been foundational to the creation of Influence Music and the congregation at Influence Church will no doubt give him their full support.

The church in Anaheim Hills, Orange County, California is led by Phil Hotsenpiller who seeks to influence the world for Christ by empowering each person to discover and develop their Kingdom assignment.

Michael’s performance inspires us all to dream; encourages us to find our own call from God to make Jesus famous; and to love somebody, the way God loves us!

Watch more of Michael’s story in the video to his single KINGDOM from Influence Music’s album #TouchingHeaven. What he and Ivey are doing is truly building God’s Kingdom.