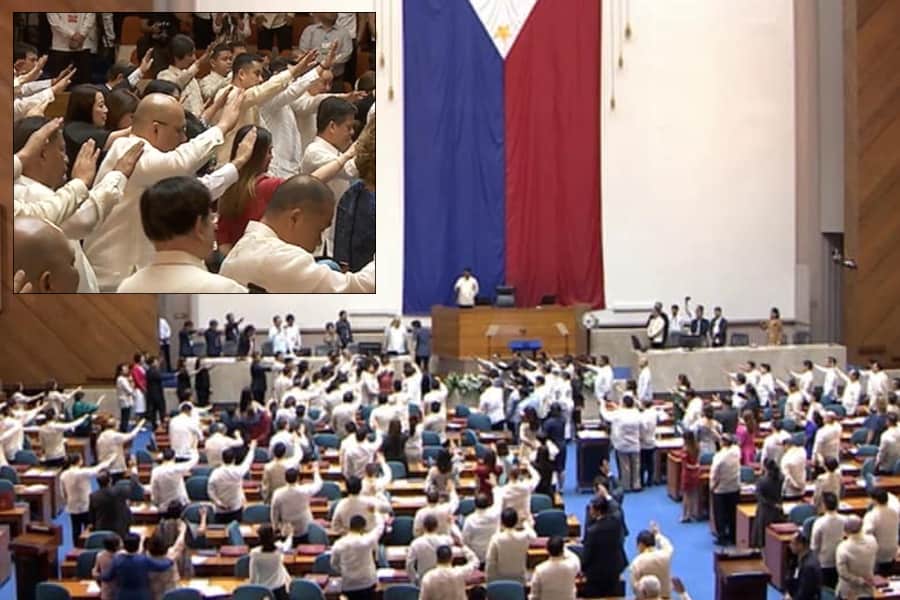 State Of The Nation: Government Officials Gathered To Pray During President Duterte’s Address

Government officials of The Philippines gathered to pray during President Duterte’s State of the Nation Address.

State of the Nation Address

On July 22, President Rodrigo Duterte delivered his fourth State of the Nation Address (SONA) at the Joint Session of the 18th Congress at the Session Hall of the House of Representatives Complex. Around 2,000 guests composed of former Presidents, members of the Senate and House of Representatives, Supreme Court Justices, members of the Diplomatic Corps, heads of Constitutional Commissions, Cabinet Secretaries, key officials of the Armed Forces of the Philippines (AFP) and Philippine National Police (PNP), and other national government officials and invited guests convene to witness the historic event.

What was supposed to be a usual state event turned to a prayer session. Hon. Bishop Eddie Villanueva led the prayer for the new house speaker and the opening of the 18th congress. The elected new house speaker is Senator Alan Peter Cayetano.

Bishop Eddie is an evangelist and the president and founder of Jesus Is Lord Church Worldwide (JILCW). He was a presidential candidate in the 2004 and 2010 Philippines elections and senatorial candidate in 2013 election. He is currently a member of the 18th Congress of the Philippines and has been a Deputy Speaker of the House of Representatives since July 22, 2019.

“I urge, then, first of all, that petitions, prayers, intercession and thanksgiving be made for all people—  for kings and all those in authority, that we may live peaceful and quiet lives in all godliness and holiness.” (2 Timothy 2:1-2)