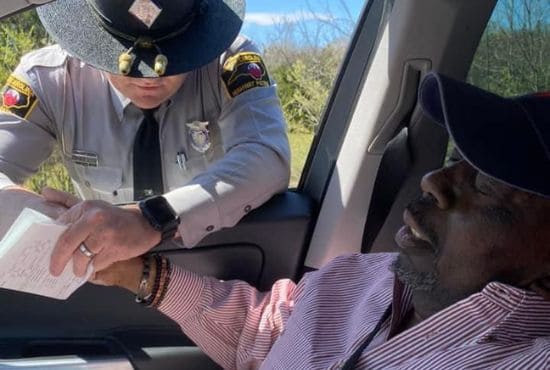 Captured on camera: Police prays over a speeding driver’s passenger who happened to be a cancer patient.

North Carolina State Trooper Jaret Doty was on his usual post one Monday morning earlier this year when he spotted a 2016 silver Volvo going beyond the speed limit. He pursued the speeding vehicle with the siren and lights on. The vehicle was heading south on I-85.

A 39-year-old Ashlye Wilkerson was driving a speeding vehicle. Beside her is her father, Tony Geddis, who just came from the hospital for his chemotherapy. In the back seat of the car are her mother and her two sons.

Upon realizing that they were being chased, Ashlye noticed that she was going way beyond the speed limit. She immediately pulled over in front of a state police officer in his state patrol vehicle. 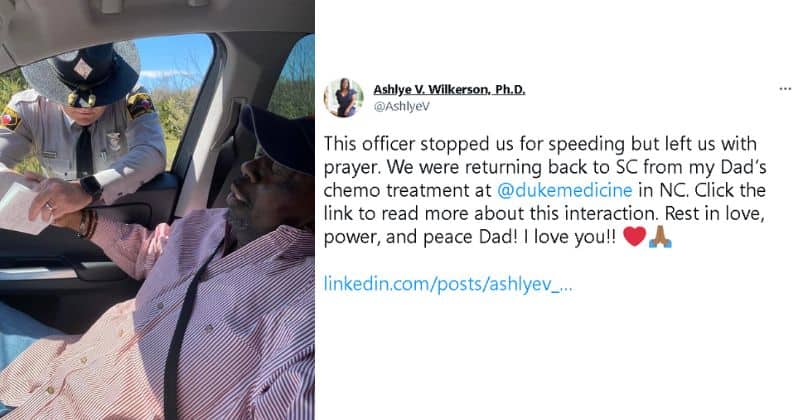 Jaret approached the vehicle on the passenger’s side where Tony was sitting. He introduced himself and told Ashlye: “Ma’am, do you know what speed you were doing?”

The cancer patient tried to defend his daughter by explaining that he had just come from the hospital.

“This is my baby girl,” Tony said. “She’s driving me home from a chemo treatment at the cancer center at Duke.”

Jaret then noticed that he was struggling and that he had been slumped in his seat. He also saw that he was carrying a pouch near his pelvic area. He knew what that pouch was because he has worn that pouch before when he had suffered from severe ulcerative colitis, he had undergone surgery to remove some parts of his colon. Thankfully, he recovered from the illness.

He then made a vow to help others who were also suffering.

“I said that if I could touch one person, or help somebody get through their illness, I would do it.”

Jaret returned to his patrol car and returned to the family, not with a ticket but with a compassionate heart.

“Sir, do you mind if I ask what kind of cancer you have?” Jaret asked Tony.

He then offered a prayer to Tony.

“Can I pray for you,” the officer asked?

Tony and his family are Christians and are active in the church.

“Of course. I absolutely believe in prayer.”

Ahlye took a photo of the touching moment. She then posted it on Social Media after Tony died on May 22 at the age of 61. Though the prayers for his physical healing weren’t answered just as his family wanted, they also believed that eternal healing has been given to Tony by God.