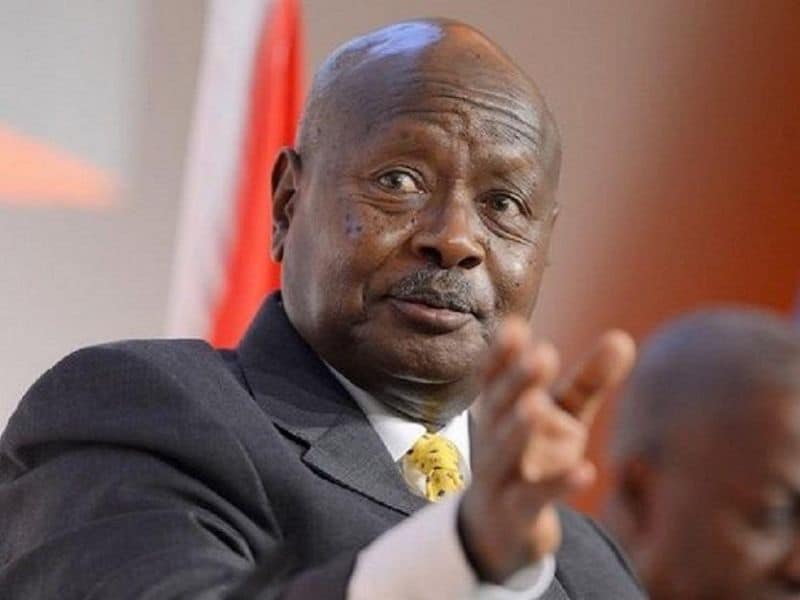 The President of Uganda declared August 29, 2020, as National Prayer Day and a public holiday. This was a response to the rise in coronavirus infections in the country. His decision came from a prompt he received from a citizen who had a vision from God – “for God to deliver us from COVID-19”.

Many presidents and world leaders have resorted to spirituality to battle against the unseen enemy, coronavirus. Brazil, United States, Philippines are just some of the countries that have called for national days of prayer to unite citizens in prayer. Similarly, Yoweri Museveni, President of Uganda, joined this group to use his authority to call for a nationwide day of prayer and make it a public holiday.

The country’s longest-serving leader said an unnamed citizen approached him with a vision from God. Then, he instructed the president to organize a National Prayer Day for God to deliver the nation from the COVID-19.

Apparently, Uganda recorded its highest number of infections in a single day last Saturday, with 318 infections. They recorded 98 new cases on the previous day. The sudden rise alarmed many citizens. 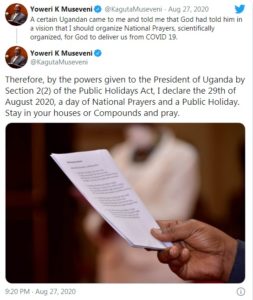 On his Twitter account, President Museveni announced his statement. “A certain Ugandan came to me and told me that God had told him in a vision that I should organize national prayers,” he wrote. “Scientifically organized, for God to deliver us from Covid-19.”

“Therefore, by the powers given to the President of Uganda by Section 2(2) of the Public Holidays Act,” he added. “I declare the 29th of August 2020, a day of National Prayers and a Public Holiday. Stay in your houses or compounds and pray.”

As of writing, the country has accumulated 3,037 cases with 32 deaths. Moreover, according to the Ministry of Health, 1,268 cases have recovered from the deadly disease.