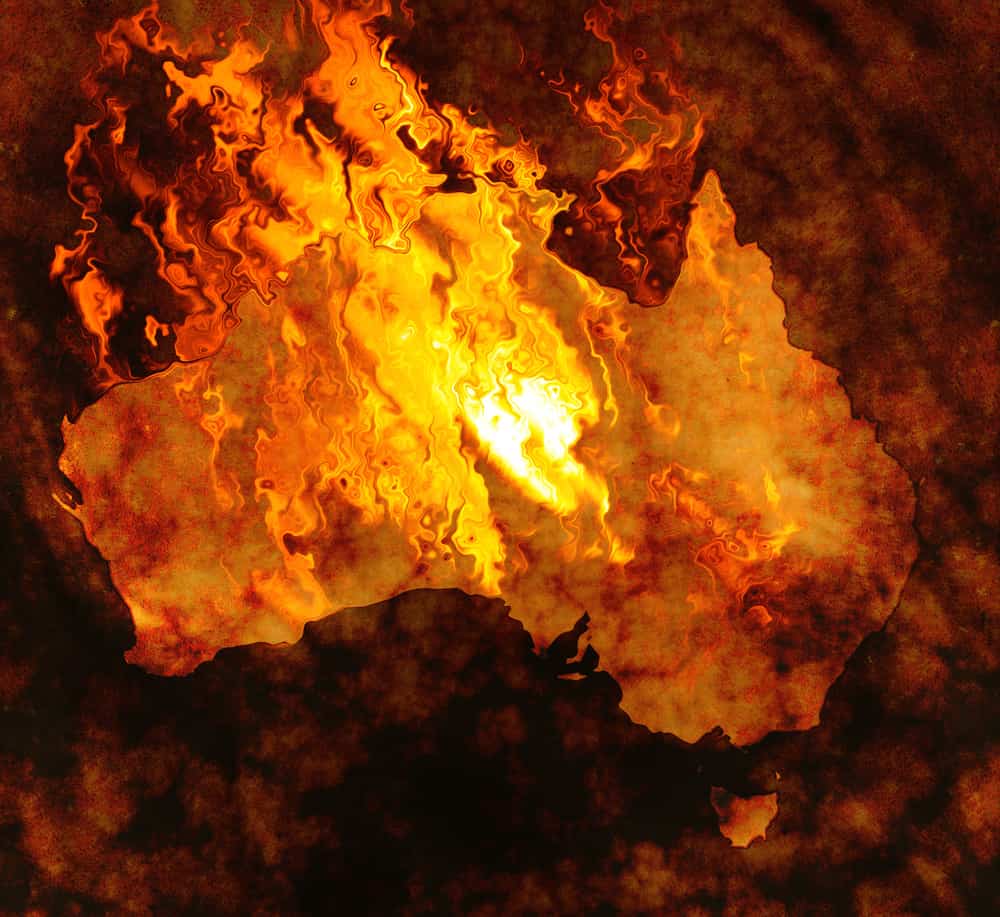 A Prophetic Word For Australia, On Eve Of Large-Scale Christian Gathering In Melbourne

As Australians prepare to gather for Awakening Australia at the Marvel Stadium in Melbourne from November 16-18. Prophetic writer, Larry Sparks of Destiny Image shares a word he received from God which is filled with much expectation.

My life has been radically marked by what has come out of the nation of Australia. When I first came to the Lord (and I mean REALLY know the Lord—not just wanting fire insurance from hell) in 1999, I encountered the presence of Holy Spirit while singing songs written by Australians—to be specific, it was the song “In Your Hands” by Australian songwriter Reuben Morgan.

I didn’t know what was happening to me! I didn’t even like “praise and worship.”  I thought it was weird, odd, creepy, flakey.  And then, one Saturday night in church, I felt electricity in my hands and a fire in my chest, as we sang lyrics declaring the nearness of the Lord.  I’d say I was wrecked at that point, but the more appropriate word was “awakened.”  In that subtle, but very supernatural encounter, I was awakening to the reality that God is not a concept.  Jesus is not distant.  He is not out there, somewhere.  He is a real, living Person who actually rends the Heavens, comes down, and touches His people with power.

But it was May 2000 at a church in Fort Lauderdale, FL where I was forever marked, wrecked, blasted—select your choice word to describe a destiny-defining encounter in the Presence of the Lord.  Worship leader, Darlene Zschech, was just beginning a tour in the United States at the time (immediately following one of the most trying times of her life, personally). I had become very familiar with her music since my encounter with the Lord… and was beyond expectant for this worship gathering. The measure of God’s weighty glory that I experienced during that service was the catalyst that launched me into what I am pursuing today (okay, I’ll fess up – I attended both, back-to-back services that night because I was so hungry).

I am one life that the move of God exported from Australia has radically impacted.  Not just a nice song.  Not an encouraging sermon.  I was marked by the glory.

In the spirit, I believe the books of destiny concerning the nation of Australia are open—and clarity is being released to the prophets.  Yes, even the upcoming Awakening Australia event this month is a sign that books of destiny are opened, the prophets are seeing and hearing what’s written, and the Ekklesia is gathering to say “Amen—let it be!”

Prophets and seers, you are speaking forth that which was written concerning the nation of Australia, and its people, before the foundation of the Earth!

“Your eyes saw my unformed substance; in your book were written, every one of them, the days that were formed for me, when as yet there was none of them.” (Psalm 139:16)

“For we are his workmanship, created in Christ Jesus for good works, which God prepared beforehand, that we should walk in them.” (Ephesians 2:10

I prophesy that Australia is a “Sheep Nation” destined to lead the nations of the Earth into new dimensions of glory, power, and prophetic anointing.

I prophesy, Australian Apostles ARISE!  May the apostles in Australia arise.  And I hear the Lord say, “There are unclaimed seats in the spirit realm.  There are unclaimed five-fold offices—apostles and prophets, specifically—for the church in Australia.”  It’s not about a title on a business card, it’s about knowing your seat in the spirit realm so you function accordingly.  And I strongly sense that we are going to witness an apostolic shift in the Australian church, where those who currently wear the title of “pastor” will step into apostolic assignments and actually shift culture over cities and regions.

From Exporting to Importing

Australia has exported and now it’s time for import-ation!  For 30 years, the praise and worship that has been exported out of the continent of Australia has given the Earth language for the move of God on the Earth.

And yet, I see a second wind of the Spirit blowing on old songs.  Yes, songs that were written, recorded and released in days past—especially the 1990’s and early 2000’s—the Lord would say, “Those songs were not just songs.  They were prophecies of a day coming.  They prophesied My movement… and now, it’s time to sing these songs again, for now you are making decrees in praise that will tip over the bowls of Heaven.”  In the past, those songs served as prayers that filled Heaven’s bowls with incense.  Now, I believe the Lord is breathing again on past songs.  In this season, however, they will shift from prayers that petition to prophetic statements that announce and decree!

A second wind of the Spirit is coming upon your songs, Australia!  A second wind… a wind that will blow on that which is old will invigorate it with fresh fire, for “NOW,” says the Lord, “NOW is the time of fulfillment.  Those songs were forerunning announcements of My movement in the Earth.  It’s time to sing the old songs again!  Sing… and decree!”

I sense fire on that phrase, “Sing your old songs again, Australia!”

Now, it’s a season of import-ation… where things will be export from Heaven to Earth into the spiritual soil of Australia. The ground is open.  I prophesy an emerging prophetic generation that has prepared and tilled the spiritual soil for Australia. They have prophesied.  They have seen glimpses of a day and an age to come.  They have seen visions and dreams that have birthed a contending in them to prophesy the destiny of Australia.  Let it be a season where Australia receives something being exported from Heaven and imported into the nation.

The Pure Prophetic: A Key That’s Opened the Books

Books open to those who operate in the pure prophetic.  And Australia, in the last 5-10 years, there has been a powerful purity hallmarking many of the emerging young prophetic voices.

Books open to prophets who never graduate from the place of intercession and friendship with God.  Intercession qualifies prophets to enter the counsel of the Lord, hear what He’s saying, and then, begin to say what He’s saying (which translates into prophecy).

For I believe the Lord is raising up “times and seasons” prophets out of Australia.  In the spirit, I see their ears pressed against the chest of Jesus, their Beloved.  Their ears are quite literally drawn to His heart.  And out of this place of surrender, yieldedness, intimacy and absolute devotion, He is placing words on the mouths of these Australian prophets that not only announce times and seasons, but transition them.

You are not a building people come to; you are a people that nations come to.

You are not a place where people simply come on Sunday; you are a thin place, connecting the disconnected people, places and even spheres of influence with the Presence of God.

Awakening Australia, you are a convergence point for the Ekklesia.  Gone are the days of conferences where people are simply informed and entertained.  Yes, there will still be teaching, preaching and music—but the Lord is calling you to see this as a place where multiple streams of the Ekklesia will converge and do business in the heavenlies on behalf of a nation’s destiny.

I prophesy that this point of convergence is marked by intercession and agreement with Heaven. I even see the Lord ushering whole gatherings into His counsel, where He unveils His plans and strategies for the nation, unveils them to an entire body of people, and then calls the Ekklesia to prophesy forth what He revealed in those gatherings.

Australia, you were called La Austrialia del Espíritu Santo—the Great Southland of the Holy Spirit!  The statement was not happenstance; it was a prophetic marker that announced the destiny of a nation.

It’s time Australia!  You have exported to the nations, and you will continue to.  But it’s time for an importation—you will import from an open Heaven!  It’s your time to see a revival in the land that shifts culture, ushers in the harvest, and establishes a sheep nation.

So, nations of the Earth, let’s bring our prayers into agreement with the prophetic destiny of our brothers and sister in Australia.  Let’s prophesy according to those books in Heaven and declare that it’s TIME for an Awakening in Australia that shifts culture in that nation and FLOODS the Earth with glory!

This article was written byLarry Sparks who serves as publisher for Destiny Image a Spirit-filled publishing house pioneered by Don Nori Sr. in 1983 with a mandate to publish the prophets.  Larry has been in the Christian publishing industry for over 10 years, first serving with the Adrian Rogers Pastor Training Institute and now at Destiny Image.